A new report from the MIT Media Lab’s Electome project shows just how segregated we have become on platforms like Twitter. Utilizing the complete data set from Twitter, the report illustrates the clustering nature of both Clinton and Trump supporters — with Trump supporters being more isolated from a diverse set of opinions. While no definitive conclusions were drawn as to why Clinton and Trump supporters tended to form distinct clusters, the impact of the clustering is more clear — the user’s information flow is altered towards less diversity of opinions. We are digitally segregated.

There may be many reasons why we either are, or choose to be, segregated on Twitter. Our ability to be connected to diverse perspectives doesn’t mean we will be exposed to diverse opinions. Speaking to VICE News about the report, MIT Media Lab data journalist John West, who worked on the study, stated that, “All of this paints a bleak picture of online political discourse. It is one balkanized by ideology and issue-interest, with little potential for information flow between the online cocoons.”

How can we understand other people when we are not interacting with other people? Social media, as we have been told, was supposed to bring us together not create online cocoons. 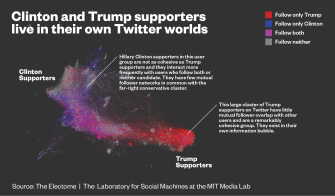 In 2013, former Twitter CEO Dick Costolo waxed poetic to the Brookings Institution about Twitter as a global town square. Costolo set up an analogy with the Greek Agora. “You came and talked about what was going on in your part of the village, and I came and talked about what was going on in mine, and the politician was there, and we listened to the issues of the day, and a musician was there and a preacher was there, etcetera, and it was multidirectional and it was unfiltered, and it was inside out, meaning the news was coming from the people it was happening to, not some observer.”

Giving an optimistic gloss of social media’s ability to eliminate time and distance, Costolo stated that, “along comes a service like Twitter that has the elimination of time and distance built into it, but also brings back all those capabilities of the Agora. It’s inside out again, it’s coming from the participants.”

Here is the problem: the platforms we utilize for our modern day Agora have shareholders. We are expecting a public town square, but experiencing a publicly traded company. In a town square, you are walking into an environment. On social media, an environment is created for you. The business model for major social media companies, which is based on data monetization and ads instead of a monthly fee, may run counter to your own desire for diverse opinions.

“Ad-based businesses distort our online interactions,” wrote tech sociologist Zeynep Tufekci in her New York Times op-ed “Mark Zuckerberg, Let Me Pay for Facebook.” “People flock to Internet platforms because they help us connect with one another or the world’s bounty of information — a crucial, valuable function. Yet ad-based financing means that the companies have an interest in manipulating our attention on behalf of advertisers, instead of letting us connect as we wish. Many users think their feed shows everything that their friends post. It doesn’t.”

This was the experience of Eli Pariser, whose 2011 TED talk “Beware online filter bubbles” seems extremely prescient. “I’m progressive, politically… but I’ve always gone out of my way to meet conservatives. I like hearing what they’re thinking about; I like seeing what they link to; I like learning a thing or two. And so I was surprised when I noticed one day that the conservatives had disappeared from my Facebook feed. And what it turned out was going on was that Facebook was looking at which links I clicked on, and it was noticing that, actually, I was clicking more on my liberal friends’ links than on my conservative friends’ links. And without consulting me about it, it had edited them out. They disappeared.”

There is a wide gulf between the potential for social media platforms to expose us to diverse opinions, and the reality and running of publicly traded companies. What if showing you diverse opinions would be bad for business?

Instead of trying to change social media companies towards the town square ideal, we need to come to terms that we are not in a public space. Social media is not a town square, and it never will be.

Both journalists have put themselves in danger to shed light on corruption and abuses of power in their home countries.
Up Next
Health

The Sport for Smart People? Running.