Drones can be an incredible boon to society if properly utilized. Farmers can monitor their crops with them and public agencies can react faster to emergencies. And these are just a few of the possibilities drones grant us. This said, they may also be capable of incredible destruction.

Indeed, the United States Federal Aviation Administration recently published a notice addressed to the public — and directed an email to all remote drone pilots — warning about the illegality of weaponizing a drone.

For the past several years, there’s been a rapid increase in drone aircraft for both hobbyist and commercial purposes. The federal government has been trying to keep pace with the breakneck speed of drone innovation. They’ve put in place rules to ensure unmanned aerial vehicles don’t interfere with commercial or military air traffic, while also making sure that all drone operators who engage in commercial services obtain a special Part 107 license.

It was only a matter of time before they’d have to regulate the weaponization of them as well.

Recently, a company called ThrowFlame made some waves when it announced its “TF-19” Wasp flamethrower attachment for drones. It works with most unmanned drones that can handle a payload of five pounds or more. ThrowFlame claims this isn’t intended as a weapon. The FAA disagrees. 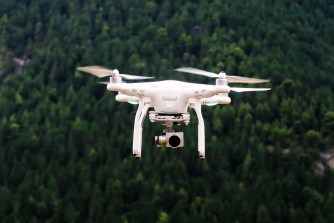 Photo by Jason Blackeye on Unsplash

Published under the title: “Drones and Weapons, A Dangerous Mix,” FAA officials put forth some clear guidelines on the illegality of weaponizing drones without proper licensing:

“Perhaps you’ve seen online photos and videos of drones with attached guns, bombs, fireworks, flamethrowers, and other dangerous items. Do not consider attaching any items such as these to a drone because operating a drone with such an item may result in significant harm to a person and to your bank account.”

Just a single infraction will end up costing you $25,000. Unless you’re a defense contractor or have another special case, it’s doubtful you’d need to weaponize your drone.

Weaponizing a drone is in violation of the 2018 FAA Reauthorization Act, Section 363, which stipulates under the section “Prohibition Against Weapons,” that “Unless authorized by the Administrator, a person may not operate an unmanned aircraft or unmanned aircraft system that is equipped or armed with a dangerous weapon.”

A “dangerous weapon” includes any item that can be used or is capable of causing serious bodily harm, or death. Flamethrowers definitely fit the bill.

For a new technology like this for which the public is already a bit apprehensive about — it’s probably best if we don’t start throwing flamethrowers on them just because we can.

A black swan event is rare but disruptive — and might be predictable.
Up Next
Neuropsych

How mirror neurons allow us to send other people ‘good vibes’

Mirror neurons bounce smiles from one person to the next.