Space travel was once the communal dream and subsequent reality of 1960s. Fifty years ago, the Saturn V blasted off from the Kennedy Space Center and landed the first men on the moon. Neil Armstrong and Buzz Aldrin stepped onto the surface, while Michael Collins stayed in Lunar orbit.

This exalted event stands as one of our most triumphant accomplishments. The many scientists, engineers, astronauts and creative people that it would go on to inspire is countless.

We owe an innumerable cultural debt to this technological era. Which is why on the eve of Apollo 11’s 50th anniversary, LEGO and The Harris Poll set out to survey children in the United States, China, and the United Kingdom on their attitude and knowledge concerning space.

A total of 3,000 children were surveyed. While the results revealed that there was some lingering excitement for space, there were some disconcerting trends as well. Such as the fact that American kids would rather aspire to inanity on YouTube as a “vlogger” than to the great beyond as an astronaut in space. 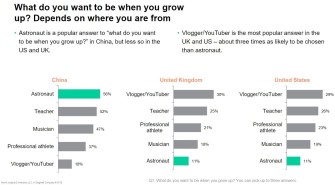 Results of the survey

According to the study, children were three times as likely to aspire towards a YouTube career than an astronaut. That is, creating videos on the internet in order to become famous. Kids in the study were between the ages of 8 and 12. On average only 11 percent said they wanted to be an astronaut.

The only place this trend was reversed was in China. A majority of children in China, at 56 percent, would rather be an astronaut over other professions. Their other answers to space questions showed that Chinese children were also more interested in the prospect of not only going to space, but creating settlements there as well.

Three out of four children, in general, believed that humans would eventually live in space or on another planet. About 96 percent of Chinese children prescribed to this answer, compared to 68 percent in the United States and 63 percent in the U.K.

The survey didn’t delve into why children in the West were less interested in space than their Chinese counterparts. We can only begin to speculate. Perhaps it’s the fact that we’ve been in a rut since the 1970s and haven’t set foot on another celestial body since then. It could be a lapse in good space PR combined with apathy spurred from our continual failings to rile up enough support for another grand initiative.

China currently places a greater emphasis on long-term goals, as well as a higher value on the tangible applications of space exploration. They’re both educated and united under the primal banner of human curiosity and a nationalistic organizational efficiency.

It also comes down to just plain ignorance. Western kids are barraged at a young age with frivolous “internet stars,” whose only claim to fame is commercialized parroting. This is a great waste of intellectual capital as children seek to emulate these people. The survey also found that kids truly don’t understand the impact and importance that space travel has imparted to their daily lives.

For instance, only 18 percent of Western children knew they used something that was invented because of space travel, compared to 43 percent in China.

Like many things in life, knowledge and inspiration can help reverse these concerning trends.

Bettina Inclán, NASA associate administrator for communications, is optimistic about what to do next to inspire future generations of America:

“For nearly 20 years, NASA and LEGO Group have collaborated on projects to inspire the next generation to imagine and build their future in space. Our latest efforts celebrate the incredible feats we achieved during Apollo 50 years ago, and now with our accelerated plans to go forward to the moon, we will continue to inspire children to dream about what’s possible and to grow up to pursue STEM careers.”

There is a lot to be inspired about. The future of humanity lies beyond the atmosphere. If we’re going to travel there and stay there, we’ll need our best and brightest to invent some incredible new technology.

If we’re going to make space exploration possible, we first have to pass down our dreams to the future custodians of the stars.

Michio Kaku believes math is the mind of God.
▸
6 min
—
with
Michio Kaku
Up Next
Life