How is the Amazonian Arapaimas fish able to block bites from razor-toothed piranha? The fish’s scales are extremely tough and flexible, with a hard outer layer, and an inner layer composed of fibers arranged on top of each other in a spiral-staircase formation. This unique structure allows for a combination of traits that are uncommon in artificial substances: strength and flexibility.

Inspired by these kinds of biological structures, a team of researchers used similar design principles to create a “non-cuttable” metallic structure that’s only 15 percent as dense as steel. The material, dubbed Proteus, could someday be used to make super-strong and lightweight metal products, like armor and bicycle locks. 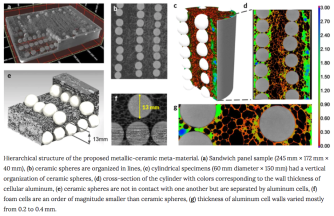 The team created Proteus by arranging microscopic ceramic spheres in a highly compressible aluminum matrix of foam. When something like an angle grinder cuts into Proteus, the structure promotes a series of forward- and backward-moving vibrations. This movement excites the ceramic spheres, causing them to break down into particles. Then, these particles fill gaps in the foam matrix, making it even harder to cut through the material. 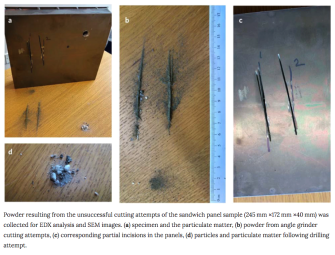 “Essentially cutting our material is like cutting through a jelly filled with nuggets” lead author Stefan Szyniszewski, assistant professor of applied mechanics in Durham’s Department of Engineering, told New Atlas. “If you get through the jelly you hit the nuggets and the material will vibrate in such a way that it destroys the cutting disc or drill bit.”

“The ceramics embedded in this flexible material are also made of very fine particles which stiffen and resist the angle grinder or drill when you’re cutting at speed in the same way that a sandbag would resist and stop a bullet at high speed.”

A video demonstration shows an angle grinder making a slight cut into the surface of the material, but not penetrating much farther. In a study published in Nature Scientific Reports, the researchers said that’s because the blade didn’t make enough contact with the ceramic spheres to produce vibrations strong enough to stop the cutting.

“However, as the cutting progressed, it increased the contact region with the disc’s rim,” they wrote. “Consequently, lateral disc vibrations were generated, which created a dynamic interface with the partially cut ceramic sphere.”

The researchers also noted that a “waterjet cutter was rendered equally ineffective by the curvature of the spheres in the lee side region, which widened the jet cross-section and consequently reduced the jet velocity fifty times according to our estimate.”

Proteus is currently awaiting patent, and it could take years for the material to make it to market. But if these kinds of materials do become widely available, it could open the door for novel technologies — like impenetrable armor — that are inspired by biological adaptations millions of years in the making.

The information could influence future treatments.