Scientists might have stumbled upon an unexpected way to solve pollution from plastics. A caterpillar bred to be fishing bait is apparently able to biodegrade polyethylene – a commonly used plastic found in shopping bags. With people using around a trillion plastic bags every year, and with up to 40% of them ending up in landfills, this could be a very significant discovery.

The wax worm caterpillar that eats plastic is the larvae of the common insect Galleria mellonella, aka greater wax moth.

The team working on the study, published in the journal Current Biology, included Federica Bertocchini from the Spanish Institute of Biomedicine and Biotechnology of Cantabria, and biochemists Paolo Bombelli and Christopher Howe from the University of Cambridge in the UK.

The discovery was made by sheer chance when Bertocchini, who is an amateur beekeeper, removed the worms living in a beehive as parasites – a common problem across Europe. She collected them in a plastic bag and soon noticed holes throughout the bag. The worms ate their way out!

This prompted a timed experiment by her team, who placed about a hundred such worms in a plastic bag from a UK supermarket. They realized that the holes started to materialize just after 40 minutes, continuing to develop at a very fast rate compared to other attempts to biodegrade plastics. The worms reduced the plastic mass by 92 mg in 12 hours, in contrast to the rate of 0.13 mg per day maintained by bacteria, recently utilized in a similar effort.

Here’s a video of the worms in action:

After digesting the plastic, the worms left behind ethylene glycol, the key ingredient in antifreeze.

Plastic is hard to break down, taking from 100 to 400 years to degrade naturally, and has been blamed for adversely affecting the environment. The scientists propose that digesting beeswax requires the worms to break down chemical bonds in a process similar to breaking down polyethylene.

“The caterpillars are not just eating the plastic without modifying its chemical make-up. We showed that the polymer chains in polyethylene plastic are actually broken by the wax worms,“ said the study’s first author Paolo Bombelli. “The caterpillar produces something that breaks the chemical bond, perhaps in its salivary glands or a symbiotic bacteria in its gut. The next steps for us will be to try and identify the molecular processes in this reaction and see if we can isolate the enzyme responsible,” he added. 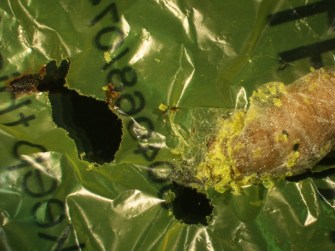 Wax worm next to biodegraded holes in a UK plastic bag used in the experiment. Credit: Paolo Bombelli.

If the scientists can isolate the enzyme used by the worms to break down plastic, they will look to turn their findings into an industrial-scale solution for polyethylene waste.

“If a single enzyme is responsible for this chemical process, its reproduction on a large scale using biotechnological methods should be achievable,” said Bombelli. “This discovery could be an important tool for helping to get rid of the polyethylene plastic waste accumulated in landfill sites and oceans.”

Tags
caterpillardiscoveryenvironmentplasticpollutionscienceshopping bagwasteworm
In this article
caterpillardiscoveryenvironmentplasticpollutionscienceshopping bagwasteworm
Related
Hard Science
200 years of exploring Antarctica
What we’ve learning from the world’s coldest, most forbidding, and most peaceful continent.
Life
Most of the seafloor is a thick graveyard of ooze
Each year, several trillion pounds of microscopic silicon-based skeletons fall down the water column to pile up into siliceous ooze.
The Present
How California could save its rain instead of letting it drain into the ocean
Why can’t more rainwater be collected for the long, dry spring and summer when it’s needed?
Life
“Virivores” discovered: Microbes that survive on a virus-only diet
Carnivores, herbivores, omnivores — and now virivores.
The Past
Here is the most terrifying pterosaur ever discovered
Meet your new flying nightmare: Thapunngaka shawi.
Up Next
Starts With A Bang
60 Years of Starstuff
How humanity discovered where our elements come from.This article was written by physicist Paul Halpern of the University of the Sciences in Pennsylvania. Paul is author of the new book The […]