Sir David Attenborough’s adventures are being retold. His time in nature exploring the nooks and crannies of wildlife will now be featured on Storytime, an app with 2.4 million downloads, that is designed for toddlers. With Attenborough’s narration, the Storytime app run by CBeebies (a BBC television network for the under six age group) aims to help young children learn how to read on their iOS and Android screens.

Attenborough has plenty of great stories to tell young children, including the moment where a gorilla sat in his lap. His love of animals and the natural world was exemplified in his creation of the BBC documentary series Zoo Quest, in 1954. Before Zoo Quest, if shows wanted to educate their audiences about animals, the featured creatures would be brought onto a lit stage, uncomfortable and out of their natural habitat. Attenborough wanted that to change, and did so by bringing his show into the animal’s natural domain instead, forever changing the dynamic. His mission and popularity grew exponentially, and he later headlined Eastwards with Attenborough and Life on Earth. Narrating his life’s work through an educational app is an important step in cultivating the next generation’s interest in preserving biodiversity on our planet.

So how will toddlers take to a story featuring Attenborough? He is, after all, a 90-year-old man and his target audience is usually those a little older than six. However, some educational studies say this is a good thing. Sesame Street, the educational program that was proven to stop children from falling behind their grade level in school, has always had guest stars that appease parents more than the kids. The show runners explain why on their workshop site.

“Research and long experience shows that when parents are involved in education, children simply learn better.”

This conclusion is everywhere, and in Children’s Learning From Educational Television: Sesame Street and Beyond, it was claimed by Thomas Cook and other critics of Sesame Street that any study of the show’s effectiveness were skewed by the parents watching with the children. 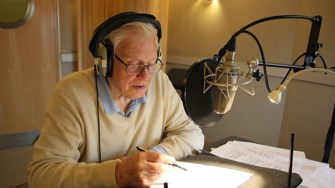 That is where Sir David Attenborough comes in. While its recognized that the young children may not know who he is, his stories can intrigue them, and their parents will remember being enthralled by him themselves. Enthusiasm is contagious. Both parents and children can be delighted at his stories of lyrebirds, gorillas, komodo dragons, and sloths. It’s interactive too—the kid in your life can help Sir Attenborough “pack his adventure kit, move plants aside for him and by tracking the gorillas’ path through the jungle,” according to the BBC.

The 5-part miniseries is illustrated by Will Rose, giving it a bright, colorful and happy aesthetic, and the entire Storytime app is directed by Kay Benbow. Benbow expressed the desire to make a full series rather than the resulting miniseries. Sir Attenborough is just too busy of a man for that, so all the energy was focused on the episodes they had time for.

Sir David Attenborough is no stranger to being on the screen, and now he’s being introduced to a brand-new generation. The man is used to being thrown in the wild, next to things that snap, bite, and sting. Teaching children to read should be no challenge at all.

Tags
appapplicationappschildrenDavid Attenborougheducationparentsphone appreadingSir David Attenboroughtoddlertoddler toystoddlerswild
In this article
appapplicationappschildrenDavid Attenborougheducationparentsphone appreadingSir David Attenboroughtoddlertoddler toystoddlerswild
Related
The Learning Curve
The art of asking the right questions
The right questions are those sparked from the joy of discovery.
Thinking
How the liberal arts can save higher education
Computerized, job-focused learning undercuts the true value of higher education. Liberal arts should be our model for the future.
Thinking
Boys are graded more harshly than girls. Why?
Education has a global bias against boys.
Neuropsych
Circadian rhythms: What time is your brain at its cognitive peak?
For college students, it’s the early afternoon.
Thinking
Academic arrogance: The school that grants your PhD thinks it’s too good to hire you
The insanity of the academic job market laid out in numbers.
Up Next
Surprising Science
Neil deGrasse Tyson Thinks We Should All “Get Over” Pluto
Why are we so hung up on Pluto’s planetary status? Astrophysicist Neil deGrasse Tyson urges us to get over it already!