According to a survey by Travel + Leisure magazine, New York, Washington D.C., and Boston are among the top five rudest cities. The common denominator? They’re from the north of the U.S. Compared to the casual aggression, indifference, and lack of common courtesy you can find in the U.S.’s northern cities, the American South can feel like a breath of fresh air. People smile more, the waitresses call you “honey,” elevator rides are (horrifyingly) filled with small talk instead of silence — people seem to have better manners there.

Why is it that expressing an otherworldly opinion is met with “bless your heart” in the South rather than, “What the hell is wrong with you?” What cultural difference accounts for this?

Psychologists Dov Cohen and Richard Nisbett believe they have an answer: “We think the best single explanation has to do with the South being home to a version of the culture of honor.” In essence, a place can be said to have a culture of honor if one’s reputation is highly valued. If somebody insults you and you fail to respond to the slight, you might start to look like the kind of person who can be taken advantage of. Conversely, if somebody were to insult you and you socked them in the jaw, you would have successfully defended your honor, and people might think twice before behaving poorly around you. The same applies to protecting one’s personal property or defending a significant other against unwanted attention.

As a consequence, good manners are a must. If you live in a culture of honor, a certain amount of respect is expected even from strangers. The alternative is that you risk offending somebody, and if they care about their reputation, they might react violently.

There are some real consequences for this. Cohen and Nisbett related how a researcher from 1934 “argued that in much of the South of his day it was impossible to convict someone of murder if (a) the killer had been insulted and (b) he had warned the victim of his intent to kill if the insult were not retracted or compensated.” This different way of thinking about violence appears to have persisted. The map below, for instance, shows the homicide rate per 100,000 in 2015. There’s a fairly clear demarcation between the places we think of as the South and the rest of the country, barring some outliers like Michigan. 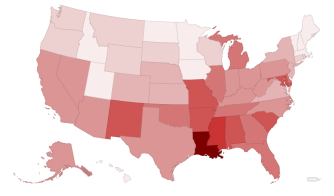 There’s clearly a lot more at work than just the culture of honor: poverty, gun laws, and other factors play a role too. But Nisbett and Cohen conducted an experiment that suggested the culture of honor is very much alive, and damaging somebody’s honor can enflame violence.

In what has been called the “asshole experiment,” the researchers recruited a sample of Southerners and Northerners for an experiment advertised as one studying the “limited response time conditions on certain facets of human judgement.” In the test, the participants were given a phony explanation of the experiment, asked to fill out a survey, and then asked to walk down a narrow hallway to another room, where they were told the rest of the experiment would take place.

This is clearly a subjective evaluation, so the researchers also measured the participants’ cortisol levels — it’s a hormone associated with stress — and testosterone levels before and after the altercation. Southerners’ cortisol and testosterone levels rose 79 percent and 12 percent respectively after the bump compared to Northerners’ 33 percent and 6 percent respectively.

The researchers surmised that this physiological and behavioral difference was attributable to the fact that Southerners grew up in a culture of honor. Without a sense of how valuable a reputation can be, Northerners tend to shrug off insults — and it’s likely they’re ruder to each other, too. But in a place where honor and reputation are highly valuable to an individual, people treat each other with more respect, but also with more violence.

Love him or hate, Karl Marx redefined geopolitics and shook up the world order.
Videos

▸
with
Big Think
Up Next
Neuropsych

Philosopher Alan Watts on the meaning of life

He reminds us that meaning is wherever we choose to look.