If you travel by air these days, odds are your opinion of the Transportation Security Administration (TSA) agents you meet on security lines aren’t exactly neutral. They’re there to make us feel more secure on airplanes, and maybe even be more secure. But while they comfort some of us, they aggravate others, removing our shoes and exposing us to invasive backscatter X-rays while exhibiting all the warmth and compassion a $19.31-per-hour job elicits. (That’s the average; TSA agents start at $16.) Of course, in spring 2018 alone, the TSA screened over 72 million passengers, so that’s a lot of trays, bags, shoes, and semi-nude body pix to go through. There’s also some skepticism that we’re really all that much more secure for all of this.

Stratos Jet Charters recently conducted a survey of people who’ve tried to sneak illicit materials past the TSA, after first ascertaining that about 32.4% of us have. The company surveyed 1,001 people about what they attempted to smuggle onboard and why. By the way, 87.7% of them were successful—not a ringing endorsement for our friends at the TSA. Stratos Jet Charters compiled the results of its survey as a series of often-disturbing visualizations called Protected: Sky-High Smuggling.

All infographics in this article are by Stratos Jet Charters 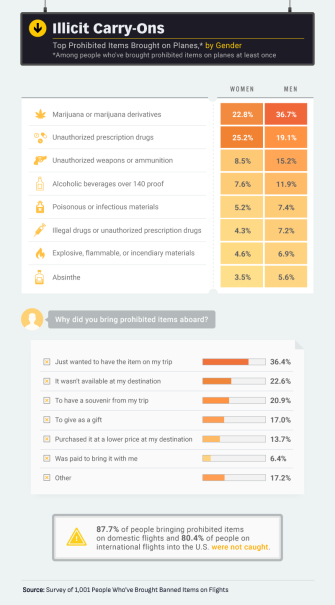 What’s being smuggled, and why? Mostly drugs, because.

Far and away, drugs make up the lion’s share of the stuff people surreptitiously get onto airplanes—counting grass, its cousins, and illegal prescription drugs, we’re talking 48% of what women secretly travel with, and 55.8% of what men smuggle aboard. For women, it’s about half and half, but for men, it’s very much mostly marijuana.

Next up is weapons and ammo, at a much lower 8.5% for females and 15.2% for males. Next up is 140-proof-plus alcohol, really strong stuff, and hopefully not brought aloft by the same people who bring guns.

Even more disturbing is that people are bringing “poisonous or infectious materials” into a packed aircraft. While a popular trope for TV shows—see season 1 of Fringe—this sounds truly scary for real life. Checking the TSA’s prohibited items list, though, reveals the kind of things one might find in this category. It’s mostly pretty obvious and not 12 Monkeys stuff.

Regardless of the item, the taboo carry-ons are mostly sneaked in because these passengers didn’t want to do without them during their travel. Some consider such an item a memento of their trip, either because it’s not legal at home or they see it as a souvenir. And it seems 6.4% are drug mules or gun runners…just saying. 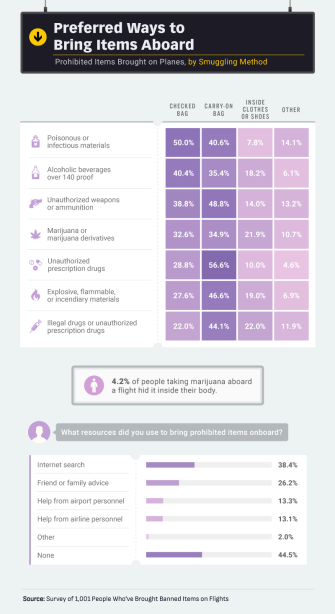 How we’re sneaking things onboard

There are a range of ways people get their contraband into the cabin. Women are more likely to pack it into their checked bags, while men—brazen souls—are more likely to secretly stuff it in carry-ons. Apparently the TSA has reason to check our shoes, too. (We don’t think we want to know what “OTHER” means.)

Getting high up high

So, the big ticket item is marijuana, and primarily for personal use, by a long shot. A lot of this traffic has to do with inconsistencies in grass’ legal status from place to place.

By a small margin, most of the weed making it into the skies, 88.5%, is in edible form, especially among those who haven’t gotten busted. Baggie toters also generally get away with it—they represent 68.8% of the successful travelers.

The people who most often got stopped were—duh—those carrying blunts. We assume this includes critters sufficiently crispy to float up to the gate with visible spliffs. 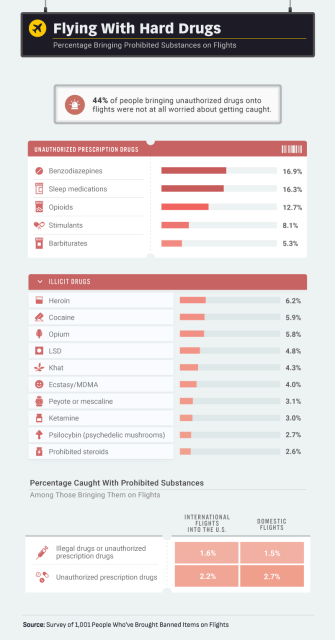 Getting even higher in the skies

Some are inclined to bring other illegal, often harder, drugs on their trips. Heroin, cocaine, and opium top the list. Next up is psychedelic LSD, followed by mind-alterers such as Khat, MDMA, peyote, and mushrooms.

Unprescribed prescription drugs that are most often smuggled are Benzodiazepines, presumably to smooth out travel jitters, and sleep aids, to knock a passenger out altogether. 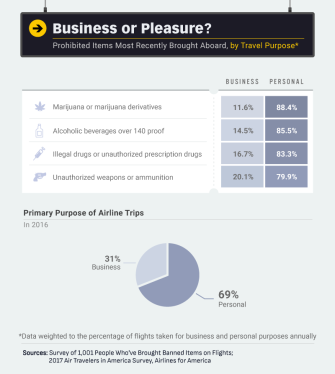 Most of this DIY smuggling is taking place during personal travel—it’s risky enough without jeopardizing one’s job. Of course, if it’s related to your work…

The only category of items that breaks 20% on business trips is unauthorized weapons and ammunition, so, um. The people in the survey traveled a lot more, 69%, for personal reasons than for business purposes, 31%, anyway.

Tags
aircraftflightinfographicsecuritytransportationtravelvisualization
In this article
aircraftflightinfographicsecuritytransportationtravelvisualization
Related
High Culture
5 great (and underrated) songs about cities
Most popular songs are about love and heartache. But some great songs — albeit underrated and perhaps a bit weird — are about the cities we love.
High Culture
Machu Picchu has changed Peru — for better and for worse
If tourism is the lifeblood of the Peruvian economy, then Machu Picchu is the heart pumping that blood — in sickness and in health.
Strange Maps
The Viking woman who sailed to America and walked to Rome
The amazing life of “Gudrid the Far-Traveled” was unjustly overshadowed by her in-laws, Erik the Red and Leif Erikson.
The Present
The real reasons we turn on “airplane mode” when we fly
Shouldn’t “flight mode” be obsolete?
Strange Maps
An interactive map with bizarre poems about England
Is the dumpster in the alley worthy of a poem?
Up Next
The Present
How much does “free” really cost?
In Life After Google, George Gilder writes that we’re paying a heavy cost for “free.”