Singapore has overtaken the U.S. as the world’s most competitive economy, according to the World Economic Forum (WEF).

The WEF published on Wednesday its annual Global Competitiveness Report, which measures 103 economic indicators within 12 broad pillars, such as macroeconomic stability, infrastructure, the labor market and innovation capability. The U.S. ranked in second place out of the 141 countries on the list, but the WEF noted that the U.S. remains an “innovation powerhouse” and the world’s most competitive large economy.

The U.S. lost rank in 2019 in part because Americans lack the job skills necessary in the 21st century, and because of decreased “healthy life expectancy.” (For context, life expectancy in the U.S. peaked at 79 in 2014, before which the measure had risen for years. In 2018, China overtook the U.S. in life expectancy.)

Meanwhile, Singapore scored 84.8 out of 100 on the annual index, ranking first in the categories of infrastructure (95.4), health (100), and labor markets (81.2). Since industrializing in the 1960s, Singapore has evolved into a high-income nation, alongside the other Asian Tiger economies. Today, the city-state’s economy is driven by its business-friendly regulatory environment, state-of-the-art infrastructure, and high levels of foreign investment. 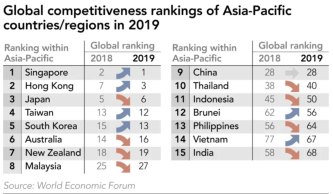 “Singapore improves from an already high base on 10 of the 12 pillars, and its score on every pillar is between 4 and 19 points higher than the OECD (Organisation for Economic Co-operation and Development) average,” the WEF said.

The report also found that some Asian nations seem to be benefitting from the U.S.-China trade war.

“For example, Vietnam used to be at 77 last year. This year, it’s at 67,” said Saadia Zahidi, head of the WEF’s Center for the New Economy and Society. “That 10-rank increase is in part because the economy has been able to use the current situation in terms of the trade war to attract some of the investments to be able to become a little bit more of a regional trading hub.”

But Zahidi noted that there’s not yet enough data to know how the trade war might be impacting competitiveness in the region.

The Knights Templar were not only skilled fighters, but also clever bankers who played a crucial role in the development of Europe’s financial systems.
Strange Maps

Technology designed to listen for atomic bombs can also hear tornadoes.
Up Next
The Present

Cognitive psychologist Steven Pinker reminds us that innuendo and euphemism yield better quid pro quo results than an “or else” ultimatum.