The humble shipping container is finding new life in the U.K., where Fraser Brown MacKenna Architects has obtained approval to construct a series of homes out of the ubiquitous containers. This “cargotecture” project is aimed at providing cheap, social housing using recycled materials.

These microhomes will have a kitchen and living room in the front and a private bed and bathroom in the back, with a deck at either end. The top of the containers will be covered with sedum, a kind of succulent with shallow root systems and minimal watering requirements, which make them ideal for green roofs. To account for the draftiness of shipping containers, each home will be insulated along the roof, walls, and floor, and double-glazing will be applied to either end.

The buildings will be constructed for social rent, a practice where rents are tied to local incomes and housing costs. Social rental properties, in general, are much needed in the U.K., where the construction of such properties has dropped by 80 percent in the past decade while more than 1 million families are stuck on waiting lists for social rental properties. Worse, nearly 1 in 200 people in Britain — roughly 320,000 — are homeless according to a 2018 report.

Compared to privately rented buildings, social housing is significantly cheaper. While the average one-bedroom apartment rents for £600 a month (roughly $730), a one-bedroom social rental goes for a little over £300 (~$365). Shipping containers are an appealing construction material for social housing since they’re so much cheaper compared to the costs of labor and materials needed to build a more traditional home. Although prices can vary depending on the square footage and the nature of the construction, a shipping container home can easily cost less than £82,400, or about $100,000. In contrast, the average cost of building a house is around £238,900, or $290,000. Not only that, but they’re modular, durable, easy to transport, and save thousands of kilograms of steel from going to waste (about 3,500 kg, to be exact, or about 7,700 lbs). But they’re not without their downsides, as well.

Steel is an excellent conductor, meaning that shipping container homes can easily turn into an oven or an icebox depending on the weather. What’s more, the chemicals from a container’s paint and sealants and from spills of its previous contents can be harmful.

Admittedly, it’s only nine stories high — not very tall for anything that could be considered the “world’s tallest blank” — but it’s still an impressive project. 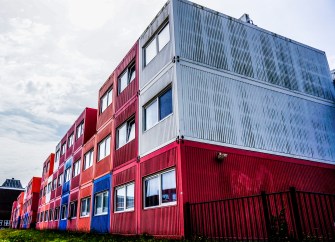 While the practice of building homes with shipping containers appears to be on the rise in the U.K., many other parts of the world are already on board. Notably, Amsterdam has a number of shipping container buildings, including student housing, apartment complexes, and markets. Atlanta, Georgia, also has a several shipping container homes built by a developer inspired by the cargotecture he saw in Europe.

If you’re jonesing for your own shipping container home, a number of companies have sprung up to meet the demand, such as Backcountry Containers and Honomobo. There’s even a thriving community for the DIY-minded with information on how to build your own shipping container home (though you’ll probably have to convince your local building authority to get the permits).

The Knights Templar were not only skilled fighters, but also clever bankers who played a crucial role in the development of Europe’s financial systems.
The Present

Bitcoin’s creator owns five percent of the entire Bitcoin supply, meaning that he has a larger percent of Bitcoin than the U.S. has of gold.
Up Next
Health