Dissatisfaction with democracy in developed nations is at a record high.

Since 1995, the University of Cambridge’s Centre for the Future of Democracy has gauged people’s views on democracy. Their most recent report, spanning 154 nations, reveals some of the highest levels of discontent since records began.

“We find that dissatisfaction with democracy has risen over time and is reaching an all-time global high, in particular in developed countries,” said the report’s author, Dr Roberto Foa.

In the mid-nineties, countries in Europe, Africa, the Middle East, Asia and Australia seemed to be relatively satisfied with their democracies. Since then, the proportion of people expressing dissatisfaction has risen from 47.9% to 57.5%.

However, not all hope is lost. People in some countries – primarily small, high-income democracies like Denmark, Switzerland and Norway – are showing great confidence in their democratic institutions. These countries form part of the so-called “Island of Contentment” – a small subset of nations, accounting for just 2% of the world’s population, where less than a quarter of the citizenry express dissatisfaction with democracy.

While the report demonstrates a marked increase in dissatisfaction, it doesn’t conclude why. However, 25 years of data does point to a correlation between levels of dissatisfaction and large-scale events such as economic shocks and political scandals. 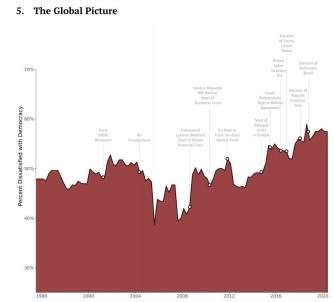 Events leading up to the current all-time high include the start of the refugee crisis in Europe, Brexit, and the elections of Donald Trump in the United States and Jair Bolsonaro in Brazil.

The future of democracy?

Voters falling out of love with democracy was one of the talking points at this year’s World Economic Forum Annual Meeting.

Tags
capitalismdemocracygovernmenthistorypoliticssociety
In this article
capitalismdemocracygovernmenthistorypoliticssociety
Related
Strange Maps
The horrors of World War II air war, in one stark map
This graph shows how badly German cities were hit by Allied bombing raids.
High Culture
Why are flood myths so common in stories from ancient cultures around the world?
Could the prevalence of flood myths around the world tell us something about early human migration or even the way our brains work?
The Past
The Wild West was lawless and chaotic — and the police helped keep it that way
Lawmen and outlaws were often the same people.
Thinking
6 great philosophers and how they used their political power
Most philosophers merely contemplate the world, but what about the ones who actually tried to change it?
The Past
Ancient migration: Bering Strait land bridge from Asia to North America was not a one-way road
Ancient humans crossed the Bering Strait land bridge from Asia into North America. But some of them went back.
Up Next
Neuropsych
America’s ‘Great Wealth Transfer’: How to pass on values and purpose
It’s estimated that $68 trillion will pass down from Boomers to millennials. Here’s how ultra-rich families can do the most amount of good with what they inherit.