You can soon buy a sex robot equipped with artificial intelligence for about $20,000www.youtube.com

“…amid an economic crisis, with restaurants and retailers closing their doors and larger companies laying off and furloughing employees, the sex tech industry is booming.”

A Bustle article published in April 2020, weeks after COVID-19 was declared a pandemic, explored the drastic boost in the sex tech industry. According to the research, Dame Products (a popular sex toy retailer) experienced a 30 percent increase in sales between the months of February to April, and popular sexual wellness brand Unbound reported selling twice as many toys as normal in this period.

While the new coronavirus was crashing the economy in other ways, the sex tech industry was one of the few that actually saw improvements, likely due to people all over the world being advised, encouraged, and in some instances forced to stay at home.

Something similar happened in 2008, during the recession: the sex toy industry was one of the only industries at the time that didn’t gravely suffer.

In 2016, “Harmony”, the world’s first AI sex robot was designed by a tech firm called Realbotix. 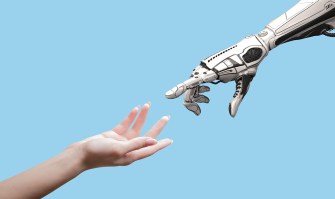 From television shows to real-life applications, artificial intelligence (AI) is becoming more and more popular in all areas of human life.Credit: Willyam Bradberry on Shutterstock

In 2020, more than one in five Americans (22 percent) say they would consider having sex with a robot. YouGov conducted a study in February 2020 that compared results from a similar study from 2017.

According to the results, 6 percent more people in 2020 are comfortable with the idea of having sex with a robot than in 2017.

YouGov points out that the increase in consideration is particularly significant among American adults between the ages of 18-34 years old. Additionally, how people feel about having sex with a robot has also changed. In 2020, 27 percent of Americans said they would consider it cheating if they had a partner who had sex with a robot during the relationship, compared to the 32 percent reported in 2017.

“If you had a partner who had sex with a robot, would you consider it cheating?”

Robots (and robotic tech) already play a vital role in speeding up manufacturing, packaging, and processing across various industries. From television shows to real-life applications, artificial intelligence is becoming more and more popular in all areas of human life.

According to YouGov, “a Bloomberg report outlining Amazon’s plans for an Alexa-powered robot that follows and helps you around the home may redefine how these machines service humans in the near future.”

Listening to some songs can cause a powerful physiological response known as “frisson.” What is it, and why does it happen?
Health

Drugs that stifle acute inflammation may prevent the body from healing properly.
Up Next
Hard Science

This space expansionist ideology marked the beginning of what Arendt called “earth alienation.”