Last week, Treasury Secretary Steve Mnuchin announced that plans to put Harriet Tubman on the twenty dollar bill would be postponed until at least 2026. This announcement came as a great disappointment to many people involved in the campaign to get a woman on the twenty.

While some have dismissed the discussion around the issue as “pure political correctness” and as a distraction, it does raise the broader question of who gets to be on money and why. After all, there is more to America than dead presidents.

The face of money

Most Americans can name all the people on the dollar bills; Washington, Jefferson, Lincoln, Hamilton, Jackson, Grant, and Franklin.

Think about them for a minute. All but two of them were presidents, and the other two were statesmen. Franklin had several other exciting parts of his life that could be celebrated, but the back of the bill features Independence Hall, suggesting that he is included for his statesmanship.

A quick review of the coins we use paints a similar picture; only the one-dollar coins that feature Susan B. Anthony and Sacagawea lack a president on them. But, let’s be honest, the best place to hide any picture is on the one-dollar coin, since nobody ever uses them. While other coins do exist that feature other people and elements of American culture, they are often minted as collectors’ items.

But ask yourself: Is America nothing but politicians, presidents, and statesmen? Do we really want figures known for working in a profession we all associate with lying and cheating on our money?

Well, what else could we do?

While many countries do limit the images on their currency to politicians, other countries print bills featuring scientists, poets, cultural icons, and the like all the time. Here are a few of the greatest hits.

In the United Kingdom, the writer Jane Austen adorns the ten pound note. 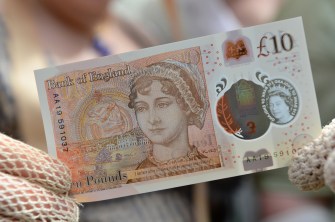 Other people currently shown on their banknotes include economist Adam Smith, the engineer James Watt, and the painter J.M.W. Turner. Previous designs included Charles Darwin, Isaac Newton, and Florence Nightingale, among others.

The German ten mark note had mathematician Carl Friedrich Gauss on it until the replacement of the mark by the euro in 2002.

And lastly, for you alternating current fans out there, here is the Serbian one-hundred dinar note featuring Nikola Tesla.

Nikola Tesla on the 100 dinar note.

These are just a few examples; there are hundreds upon hundreds of similar cases from all over the world.

Does any of this matter? I mean, so long as the clerk at the gas station takes it, I’m fine.

As Neil DeGrasse Tyson argues in the above video, it does at some level.

For those who didn’t watch the video, he argues that we all agree that people who are on money must be important. Even if a child was to look at a dollar bill and not know who was on it, they can understand that this person must be significant. By placing certain people on the currency, we are making a cultural choice to say that we value their achievements and may inspire people to look into who they were and what they did.

His line of thinking harkens back to Plato, who told us in Republic that “What is honored in a society will be produced there.”

Also, plenty of people do care about what’s on the money they hardly look at before they spend. Ever notice that it says “In God We Trust” on it? Several organizations have argued that this is either great or horrible. Teddy Roosevelt, who found it blasphemous, sought to have it removed, but it was later reintroduced as a jab at the “godless commies.” The dollar doesn’t really have masonic imagery on it, but plenty of crazy people think it does and base grand conspiracy theories on this idea.

To return to the issue of putting Harriet Tubman on the twenty, plenty of commentators have pointed out how Andrew Jackson — who has been on the twenty since 1928 after replacing Grover Cleveland — was a genocidal, pro-slavery maniac who caused a bank panic through his insane policies and introduced the spoils system. At a certain point, we do have to ask ourselves how much we still like the guy and if we want him on our most commonly used bill.

Who else could be on American money?

A few hundred ideas come to mind right away. The only real rule for who gets on the money is that they have to be dead. Luckily, there are plenty of dead people in American history.

If you want a great poet, how about Walt Whitman, Emily Dickinson, Edgar Allen Poe, Alan Ginsburg, or Robert Frost? More into paintings? No problem, America has plenty to choose from. What do you think about Grant Wood, Jackson Pollack, Georgia O’Keefe, Norman Rockwell, or even Andy Warhol?

There are tons of scientists and inventors to work with. Nikola Tesla, Albert Einstein, George Washington Carver, Hedy Lamarr, Grace Hopper, or the Wright Brothers would all look great on the fifty. If Dr. Tyson is right, we could even keep Ben Franklin and just change the back of the hundred to reflect his impressive career in science.

If you want an intellectual on your money that wasn’t a scientist, American history can provide that too. Names like Ralph Waldo Emerson, John Dewey, Carl Rogers, and Booker T. Washington come right to mind.

That’s not even to touch on musical titans like Leonard Bernstein, Duke Ellington, or Jimi Hendrix. There are also activists like Martin Luther King Jr, Harvey Milk, Marsha P. Johnson, Jane Adams, or Ida B. Wells.Then there are writers like Mark Twain and John Steinbeck who would do just as well on the five as Lincoln does now.

Some of the people who have been fighting the hardest for putting Tubman on the currency, Women On 20s, have a page listing all of the women considered during their campaign before Tubman was decided on. Their list is extensive, and all of them would be welcome additions to the currency.

Do you ever think about who is on the money you spend every day? Perhaps you should. The things we deem important in our society not only say a great deal about us as a people but also influence the society we live in. While it might be a while before the United States Mint starts putting anybody but dead statesmen on the currency, even discussing who should or shouldn’t be on the money can help us understand who we are and where we want to go.

“This is much deeper than just ‘let’s figure out how we can get both sides to get along.’”
▸
15 min
—
with
Ian Bremmer
The Past

Scientology, QAnon, and Heaven’s Gate: why do we seek healing from cults?
▸
with
Jamie Wheal
Up Next
Strange Maps

Paris, destroyed: A map of buildings lost to history