A couple of months ago, Gail Bradbrook, the co-founder of Extinction Rebellion, called for the mass ingestion of psychedelics as an act of civil disobedience. She suggests that psychedelics could serve as a catalyst to inspire people to turn to environmental activism.

However, others have argued that this suggestion might be poorly aimed. While it might serve to give some of the recorded benefits of psychedelic usage to a large number of people, it wouldn’t cause much immediate change in environmental policy. They instead suggest that we give our politicians drugs, magic mushrooms to be precise.

For the sake of argument, how bad of an idea is this really? Would it be effective?

Psychedelics in the brain: Fire the conductor, let the orchestra play

Psychedelics have a variety of increasingly well-documented effects. Their use is associated with an increase in openness to new experiences and ideas, shifts in worldview, reduction in anxiety and depression, increases in creativity and empathy, and a newfound love of progressive rock.

Furthermore, they are known to decrease authoritarian tendencies in people which are, in turn, shown to be tied to a disregard for the environment.

It is easy to see why the suggestion of giving our political leaders the stuff would be made. Several of these traits seem like they could be good for anybody. If people with power gained these traits, perhaps they would make the world a better place. 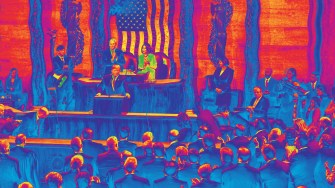 Plus, imagine how entertaining the State of the Union address would be if everybody there were tripping.

The idea that we ought to give all of our politicians drugs isn’t a new one. Somewhat disturbingly, it is also one that has been suggested several dozen times throughout the past fifty or so years.

More of the more amusing suggestions came from the Beatles after they discovered marijuana and psychedelic drugs. In the Beatles Anthology, they discuss how they once felt that giving all of our leaders the stuff would put an end to wars.

Grace Slick, the lead singer of Jefferson Airplane, once even planned to spike the tea of Richard Nixon with 600 micrograms of LSD- roughly as much as your conspiracy theorist uncle took the day he realized the lizard people had taken over the world – to give him a new perspective on the world. Luckily for everybody involved, they didn’t let her onto white house grounds when they saw her bodyguard was Abbie Hoffman. 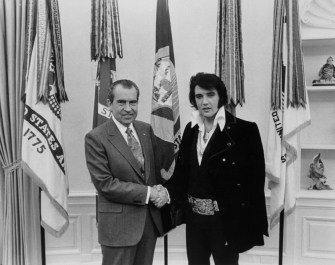 In another universe, this picture features Nixon and Jerry Garcia. (Photo by MPI/Getty Images)

Time to kill the vibe for you hippies.

However, there are more than a few reasons why we might not want to drug our politicians and why it might not even be all that effective for getting society to the point that proponents of psychedelics wish to.

While it is easy to rage at politicians who don’t do exactly what you want them to, you must remember that they didn’t spontaneously generate — they were elected. Every climate change denying scoundrel in office was put there by an electorate of their peers.

Fixing one person — or even a few hundred elected ones — doesn’t change that, and then you’ve only won until the next election anyway.

Secondly, the traits that are fostered by psychedelics don’t always make for capable politicians. While an acid trip might make a Machiavellian politician care more for the environment, it would likely also make them less likely to use the dirty tricks they currently employ to make actual change happen. President Lyndon Johnson might have been an awful person; he was also effective. Increasing his empathy levels might have been a good thing, but it might also have diminished his effectiveness at promoting The Great Society.

You need people in power with both concern and skill to change things. If you think that a bunch of people coming down from psychedelics are going to be effective at running a democratic government faced with a crisis, go watch the board meeting of any housing co-op deal with a major issue.

This point, sans psychedelics, was made five hundred years ago by Machiavelli in his masterpiece, The Prince. In it, he argues that the traits that make for a good person are not the same as those that make a great statesman. While that might seem obvious to some of you, it is a controversial point that landed the book on the Catholic Church’s list of prohibited texts.

He considers the case of Girolamo Savonarola, a Catholic Clergyman who came to power in Renaissance Florence. Even if you accept his vision of the New Jerusalem in Florence as a society worthy of creating, which you probably don’t, you have to admit that he wasn’t very good at statecraft once he and his supporters came to power.

This lack of skill undermined any attempt at good he could have made. If he had been a little less godly, perhaps he could have built more of the New Jerusalem.

The lesson rings true to this day. We need not only politicians who care about the right things or are made to care about them by public pressure, but who have the skills necessary to affect change. While an acid test with all of our current leaders would be extremely entertaining, it probably wouldn’t amount to much.

Should we have all of our politicians take shrooms to get them to take action on certain topics? Probably not. But just because this wouldn’t work doesn’t mean there aren’t other ways to make a difference. While this idea is amusing, there are other ones.

From boosting empathy to improving therapy, virtual reality is poised to change our ideas of the self.
Neuropsych

New research suggests they may be in the connections between your brain cells.
Up Next
Starts With A Bang

Dark Matter’s Biggest Problem Might Simply Be A Numerical Error

A galaxy that was governed by normal matter alone (L) would display much lower rotational speeds in the outskirts than towards the center, similar to how planets in the Solar […]