Activists have been compiling videos of violent clashes between protestors and police in the two weeks since George Floyd was killed by officer Derek Chauvin. Hundreds of these videos appear on a Google spreadsheet that currently lists more than 1,000 incidents of alleged police misconduct. Many of the scenes are surreal.

In Minneapolis, a video shows police marching down a mostly empty residential street and screaming “get inside!” to a handful of residents standing on a porch. When the group doesn’t go inside, police shoot them with pepper bullets.

In San Diego, police said they witnessed a woman swing a sign at an officer on a motorcycle. It’s unclear whether she did. But what a video does show is several cops arresting a woman at gunpoint, putting her inside an unmarked van, and telling her concerned friends: “If you follow us, you will get shot.”

In Austin, 16-year-old Edwin Ayala attended a protest. He stood alone on a grassy hill, about a dozen yards away from police and other protestors. As Ayala stood still, an officer on the street raised his gun and shot a bean-bag bullet at the boy’s head. Ayala collapsed instantly and was hospitalized.

Hi. You're probably seeing this pinned tweet because cops are rioting nationwide and I'm trying to keep track

The project is led by T. Greg Doucette, a criminal defense lawyer in North Carolina who produces the podcast Fsck ‘Em All, which covers police conduct. In late May, he started posting videos of clashes between protestors and police to social media. Soon, people began sending him videos to post.

“I think ‘avalanche’ is probably an understatement,” Doucette told TIME. “I’ve got close to 2,000 messages that I haven’t even been able to open yet.”

Doucette and his colleagues try to verify each video, such as by checking whether the media has covered an incident, or highlighting when videos show an incident from an additional vantage point. Most entries also contain commentary, such as: “police shoot out a dog walker’s eye for sport.”

A Bronze Star recipient protested in Columbus and was pepper sprayed, tear gassed, run into by a bicycle cop and injured by wooden bullets.

"This is worse than anything I received in an actual war zone."https://t.co/5AHARTdXDF

One of the people helping with the project is Jason Miller, a mathematician in California. Miller told TIME:

“[As] I’ve grown up and matured, I’ve moved out of Minneapolis and I’ve reflected on my relationship with race. I’ve seen how the culture in Minneapolis was not a healthy culture. […] I wanted this information to be freely distributed, and free for people to see.”

To be sure, it’s not always clear what’s happening in these videos, or what provoked a clash. What’s more, it’s likely that cops technically aren’t breaking any laws in some of these incidents. After all, most police in the U.S. are given the power to use pepper spray, tear gas, batons, and non-lethal bullets against civilians who are “unlawfully” assembled. 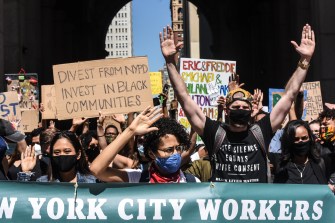 It’s also worth mentioning that hundreds of police officers have been injured during protests and riots in recent weeks. In St. Louis, four officers were shot and one former police captain was killed. In Oakland, two Federal Protective Service officers were shot during a protest; one was critically injured, the other died. And in New York City, nearly 300 officers have been injured so far, according to the NYPD. (It’s unclear how extensive those injuries are.)

Still, no police handbook calls for officers to pursue extralegal revenge on civilian crowds. And it seems safe to say that no public official would argue that police — no matter the circumstance — should be permitted to deliberately cover up their body cameras, pepper-spray protestors from behind as they’re walking away, or chase down and beat reporters for documenting the protests.

“What we’re taught in school is that all power comes from the people; the people elect their representatives, the representatives hire the bureaucrats, the bureaucrats hire the cops” Doucette told TIME. “They’re supposed to be at the bottom of the rungs of power, and instead we’ve inverted that upside down— where the police are openly declaring war on their own citizens, and the politicians are simply sitting there, diddling their phones, not doing anything.”

Tags
governmentlawPolicePolice brutalityPolice violenceprotestssocial change
In this article
governmentlawPolicePolice brutalityPolice violenceprotestssocial change
Related
The Past
In the Soviet Union, murderers had an easier time than political dissenters
Soviet researchers studied crime through a Marxist-Leninist lens. Under Lenin, a humanitarian approach to criminality briefly emerged, but dissipated when Stalin rose to power.
The Present
Sludge: Americans spend 11.4 billion hours filling out federal paperwork
Unreasonable burdens prevent people from thriving. Eliminate them.
The Present
Spending money on new infrastructure isn’t always the best idea
The questions about which massive structures to build, and where, are actually very hard to answer. Infrastructure is always about the future: It takes years to construct, and lasts for years beyond that.
The Present
Could we replace lawyers with robots? In some cases, yes
You don’t need to completely automate a job to fundamentally change it.
Neuropsych
Science in the court: how neuroimaging can improve the “reasonable person” standard
For nearly two centuries, courts have relied on the subjective “reasonable person standard” to solve legal disputes. Now, science can help.
Up Next
The Present
A new device generates energy from shadows
By leveraging the difference between lit and shadowed areas, a new energy source perfect for wearables is invented.