Despite its frequent rain and cloudy skies, the weather in London rarely dips into the truly miserable. In the wintertime, London is, at its coldest, only 5°C (41°F). During the summertime, it doesn’t typically get much hotter than 23°C (74.5°F). Yet, if we were to travel westward, we’d arrive in the far chillier Newfoundland.

The reason why London enjoys such regular temperatures while Canadian cities that are equally as far north are forced to shiver in the cold has to do with ocean currents—specifically, the Atlantic Meridional Overturning Circulation, or AMOC. The portion of AMOC that most are probably familiar with is called the Gulf Stream, or the North Atlantic Current.

This massive current transports warm water from the Gulf of Mexico towards Europe, stabilizing much of northwestern Europe’s climate.

“The oceans store an immense amount of energy and the ocean currents have a strong effect on the Earth’s climate,” said University of Groningen mathematician Fred Wubs in a statement.

However, human-driven changes to the climate are changing how oceans store energy. Correspondingly, this could change how AMOC functions. Modeling the impact of meltwater from Greenland and excessive rainfall, Wubs and his colleagues discovered that this current could temporarily halt within the 100 years, significantly impacting Europe’s weather in the process. 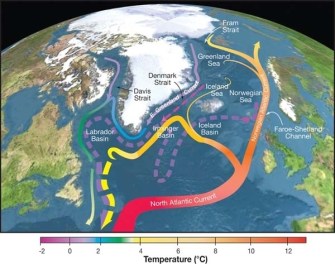 More ice-skating on the Thames

The AMOC has been weakening for the past 150 years and is currently at its weakest point of the past 1,500 years. This has spurred researchers to assess the current’s future. Concerns over a complete failure of the AMOC inspired the 2004 film The Day After Tomorrow — although the events that took place in that film are clearly hyperbole.

Wubs and colleagues calculated that the possibility of a temporary shutdown of AMOC stood at 15 percent over the next 100 years, a one-in-six chance. Fortunately, however, the same model predicted that there was virtually no chance of a complete shutdown over the next 1,000 years.

For North America and Europe, this would mean colder winters, as well as hotter summers in Europe. More worryingly, this would also reduce the ocean’s ability to absorb carbon dioxide, exacerbating the effects of climate change.

The AMOC has fluctuated over Earth’s history, and when it has slowed down stopped in the past, massive cooling events typically followed. For instance, an AMOC slowdown has been implicated in the rise of the Little Ice Age, a period between 1200 and 1850 when temperatures in Europe dipped by about 1°C. Some researchers suggest that the Younger Dryas, an abrupt cooling period that took place between 12,900 and 11,7000 BP, occurred in part due to a change in AMOC, dropping the Earth’s climate by 2 to 6°C in a matter of decades.

While the exact impacts of a temporary shutdown, especially under modern climate conditions, aren’t entirely clear, such a shutdown would definitely spell colder winters for Europe. “Previous studies have shown that a shutdown of the AMOC would considerably affect the climate of the North Atlantic, and, more in general, of the Northern Hemisphere: the temperatures may drop by a few degrees, depending on the location,” co-author Daniele Castellana told Newsweek. Their findings “strongly depend on the background state of the climate,” he added.

It’s important to note that even though an AMOC slowdown or shutdown will cool much of the northern hemisphere, higher levels of greenhouse gases in the atmosphere will still result in higher global temperatures over the long term. In fact, one study even suggested that an AMOC shutdown could result in extremely rapid increases in global temperatures, since the churning ocean current would be less able to store heat in the deep ocean, releasing it onto the surface instead.

If anything, recent findings into the AMOC’s role in the global climate underscore just how large and complicated the Earth’s systems really are. The AMOC has only been continuously monitored since 2004, so more research is needed before we can definitively say what is happening to it and what a temporary shutdown would mean for the rest of the world.

Social conflicts can leave molecular marks on animals, according to recent research on the ant species Harpegnathos saltator.
Up Next
Health

An immune molecule sometimes produced during infection can influence the social behavior of mice.