What if a video game could teach science in a way that didn’t put gamers to sleep?

That’s the idea behind a new game called Space Odyssey, which aims to be a virtual universe governed by real scientific laws where players can build planets and solar systems and explore the cosmos. Neil deGrasse Tyson is helping to develop the game and is planned to be the narrator who guides players through space.

Space Odyssey, as Business Insider reports, would feature “building activity similar to Minecraft, space colonization akin to that in Civilization: Beyond Earth, elements of exploration like No Man’s Sky, and echoes of Elon Musk’s favorite rocket-building simulator, Kerbal Space Program.”

What would set this game apart, however, is its educational bent and insistence on using real-life science to inform the mechanisms of the game. On this point Tyson won’t budge.

“I have no patience for people who say, ‘I don’t want the laws of physics to constrain me’,” Tyson said at a recent E3 convention. 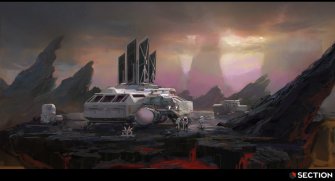 The game is in early stages of development and at the time of writing has received just more than a third of its $314,159Kickstarter goal.

If the game receives full funding (which wouldn’t solely come from the Kickstarter) players will be able to “develop planets, colonize worlds, nurture species, mine elements, build robots, and discover unique life-forms as you coordinate with others in an intense game of real-time strategy,” according to the Kickstarter video.

The first stage of the game would take place on Proxima B, which, at 4 light years away, is the closest known exoplanet to our solar system. Players would explore the planet and acclimate themselves to the game with Neil’s voice helping them learn the ropes. They would then move to a space station where they’d be able to create, terraform and protect a home planet. Other major activities, missions, and narrative arcs are planned, as well.

Players would also be able to explore systems created by other online players or “prominent scientists and fictional world-builders like Tyson, Bill Nye, George R.R. Martin, Neil Gaiman, and Peter Beagle,” according to the Kickstarter page.

Space Odyssey co-creator elaborated in an interview with Digital Trends:

“Part of the gameplay will allow you to grow a planetary system,” Murphy said. “Its size and scope is relative to the level of challenge you would like to undertake. You can grow and mature these planets as much as you’d like, creating colonies, ports, mining structures, undertake trade of elements you discover/mine or invent or innovate. We are adding strategic partners that will consult with us on design and tech possibilities, including Bigelow Aerospace and the National Space Society to name a couple.”

Murphy said Tyson has played a creative and scientific role in the game’s development.

“He’s helped create challenges in the game, and has challenged our creative team to entertain and inspire,” Murphy said. “He has also brought forward some incredible collaborators to our efforts, an incredible team of scientists, astronauts and explorers.”

According to a fact sheet for the game, Space Odyssey is being designed for PC and will target the Steam market but plans also call for virtual reality missions that will be playable on Oculus Rift or Samsung Gear.

“It’s a departure from what the core game feels like when you play it, but that’s okay. Our goal with the VR missions is to take things to an even more educational level,” Murphy said.

It remains to be seen if Space Odyssey can fuse science education into its ships and terraformed planets, and end up with gameplay that’s compelling to mainstream gamers. Minecraft, one of the most widely played video games ever, is one of the few games that’s bridged the gap of education and playability – some teachers even use it to teach lessons in the classroom.

Space Odyssey reportedly borrows some of Minecraft‘s building-blocks applications. So with that and Tyson’s preternatural ability to get the masses absolutely hyped for science, this new game might just be able to take off.

Tags
neil degrasse tysonoculus riftspace explorationspace odysseyspace simulatorvideo gamevirtual reality
In this article
neil degrasse tysonoculus riftspace explorationspace odysseyspace simulatorvideo gamevirtual reality
Related
Learning technologies
VR training is the future. Here’s why, and how companies are using it
The time to begin exploring VR training is now. Here are the pros, cons, and different ways this technology can be utilized.
The Future
The metaverse: From science fiction to virtual reality
Think of a combination of immersive virtual reality, an online role-playing game, and the internet.
Your Brain on Money
Want to save more money? Start playing video games.
Playing video games could help you make better decisions about money.
▸
6 min
—
with
Big Think
The Future
Immersive technology will revolutionize everything from theme parks to daily life
Virtual reality continues to blur the line between the physical and the digital, and it will change our lives forever.
The Present
Virtual reality tourism can boost travel in a post-pandemic world
Virtual tourism has thus far been a futuristic dream, but a world shaped by Covid-19 may be ready to accept it.
Up Next
Culture & Religion
The Philosophy of Drag: What Do RuPaul and Nietzsche Have in Common?
In the glamor-filled world of drag queens, fashion and “ethical self-fashioning” might be closer than we think.