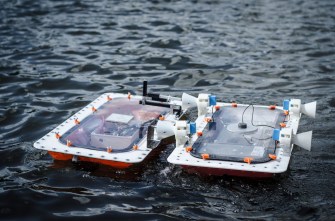 Amsterdam has a problem with its streets — they’re packed. They also have a potential solution to this congestion: Their 165 canals. The city’s Amsterdam Institute for Advanced Metropolitan Solutions (AMS) has teamed up with MIT’s Senseable City Lab in a 5-year project to develop intelligent, interlocking vessels that can shift some of that activity from land to sea. These Roboats keep evolving, and now MIT has announced that they’re able to shapeshift as they navigate the city’s also-crowded and winding canals and to self-assemble into floating structures. 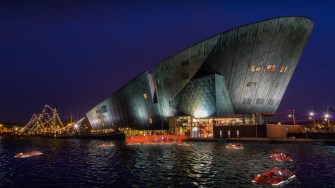 The NEMO Science Museum, with an illustration of the roundAround system.

Dynamic urban infrastructures for the future

While the Roboat project is currently focused on Amsterdam’s congestion, as coastal waters rise around the world, other cities will require this kind of enhanced flexibility in meeting the needs of their populations. Roads will submerge, waterways will grow, everything will shift around, and developing dynamic infrastructure systems will take on a new urgency as conditions evolve too quickly to be adequately addressed by long-term, fixed, traditional construction projects.

The first major mission for the Roboats will be the “roundAround,” a moving “bridge” built of connected autonomous boats circling the canal and ferrying people between the NEMO Science Museum in Amsterdam’s city center and the rapidly growing Marineterrein district. Currently, it takes about 10 minutes to walk a kilometer around the waterway to travel between the two locations, but the bridge will shorten that time to less than 2 minutes.

One aspect of the roundAround challenge is getting the autonomous Roboat units to play nice with obstacles and each other as they self-navigate. Another aspect is getting travelers safely onto and off the vessels’ ramps. The designers expect to get plenty of feedback from passengers that will inform refinement of the system going forward. 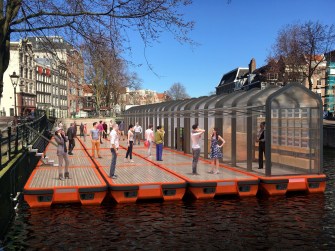 An illustration of the Roboat concept in action.

The Roboat project involves sets of interconnected Roboat structures, each of which is a “connected-vessel platform,” or a CVP. A CVP is comprised of two types of Roboats: A coordinator — the CVP’s brain — and a number of workers. Multiple CVPs can be assembled to make larger structures.

Both types of Roboats are outfitted with four propellers, a wireless-capable microcontroller, automated latching mechanisms, and a sensing system with which it can communicate with other vessels.

The coordinators use GPS for navigation, as well as an IMU (inertial measurement unit) with which they can plan the CVPs’ trajectory, orientation, and speed. In just a little over 100 milliseconds, a coordinator identifies collision-free regions to work out the shortest safe route. It also estimates its own final position and wirelessly commands its workers into the desired configuration around itself.

The new paper documents the capabilities of low-cost, 3-D-printed, 1/4 scale boats operating in an MIT pool. The boats demonstrated their capabilities by starting in one shape — side-to-side straight lines and squares — and flawlessly separating and reforming into rectangles, “L” shapes, and end-to-end lines. It’s a promising start: “A set of boats can come together to form linear shapes as pop-up bridges, if we need to send materials or people from one side of a canal to the other. Or, we can create pop-up wider platforms for flower or food markets,” says co-author Daniela Rus.

“My dad asked me if I had been to tutoring and I lied… Then he showed me the tablet.”
The Well

The larger truth on the streets is that no one uses just one drug anymore.
Strange Maps

Here’s how to appreciate them from a distance.
Up Next

How to make the most of meetings, with Tim Ferriss, Elon Musk, and Carson Tate