Scientists with the U.S. Geological Survey (USGS) were recently analyzing Colorado rainwater samples when they discovered something unexpected: microplastics, the tiny plastic bits (5 millimeters or smaller) that pollute the environment.

In a new report, bluntly titled “It is raining plastic”, USGS researchers describe how they found plastic in about 90 percent of their rainwater samples, which were obtained from six sites in the Denver-Boulder area.

“The plastic materials are mostly fibers that are only visible with magnification (~40X),” they wrote in the report. “Fibers were present in a variety of colors; the most frequently observed color was blue followed by red > silver > purple > green > yellow > other colors. Plastic particles such as beads and shards were also observed with magnification.”

The researchers confirmed that the fibers, beads, and shards in the rainwater were microplastics, but they aren’t sure how the material got there.

“I think the most important result that we can share with the American public is that there’s more plastic out there than meets the eye,” one of the researchers and USGS research chemist Gregory Wetherbee told The Guardian. “It’s in the rain, it’s in the snow. It’s a part of our environment now.”

Scientists still have much to learn about the extent of microplastics pollution, but the available evidence suggests that plastic has made its way into nearly every part of the environment, from the atmosphere to the deep ocean, as well as in marine life and birds. Alarmingly, scientists have also found microplastics in human stool, and plastic fibers in human lungs.

“Plastic fibers also break off your clothes every time you wash them,” Sherri Mason, a microplastics researcher and sustainability coordinator at Penn State Behrend, told The Guardian, adding that all plastic items might be shedding tiny particles. “And then those particles get incorporated into water droplets when it rains.” 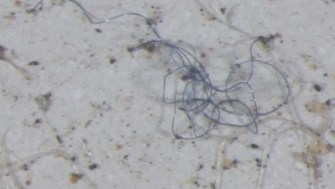 How are microplastics affecting our health? It’s hard to say, considering we’re all ingesting a number of pollutants from birth, and there’s little research showing exactly how plastics affect the human body over time. In experiments on mice, however, microplastics were found to increase levels of oxidative stress molecules in the liver. A separate 2018 study, published in the journal Science of the Total Environment, described how plastic contains additives that act as endocrine disruptors, and when microplastics are fed to mice, these disruptors significantly interfered with the microbiome.

“Mice aren’t humans, but we do know that when the microbiome is disrupted in humans it leads to many diseases, including type 2 diabetes and obesity,” Erin Pitkethly, RPh, a registered pharmacist and certified nutritionist with Robinsong Health in Ontario, Canada, told LIVESTRONG.com.

It’s likely impossible to totally avoid consuming microplastics, but two ways you might limit exposure include not eating shellfish (or only eating high-quality shellfish) and avoiding plastic food containers, which can leak plastic particles into food.

Tags
environmenthealthplasticpollution
In this article
environmenthealthplasticpollution
Related
Hard Science
200 years of exploring Antarctica
What we’ve learning from the world’s coldest, most forbidding, and most peaceful continent.
Life
Most of the seafloor is a thick graveyard of ooze
Each year, several trillion pounds of microscopic silicon-based skeletons fall down the water column to pile up into siliceous ooze.
The Present
How California could save its rain instead of letting it drain into the ocean
Why can’t more rainwater be collected for the long, dry spring and summer when it’s needed?
Life
“Virivores” discovered: Microbes that survive on a virus-only diet
Carnivores, herbivores, omnivores — and now virivores.
Health
5 biotech trends to watch in 2023
From synthetic biology to xenotransplantation, biotech will continue to march forward in 2023, in part powered by data and AI.
Up Next
The Present
Could A.I. detect mass shooters before they strike?
President Trump has called for Silicon Valley to develop digital precogs, but such systems raise efficacy concerns.