I can expect anywhere between two and five Karen tweets to come across my social media feed every day. Recently, there was the $40,000 Rolex-wearing Costco Karen, the basket-slamming Trader Joe’s Karen in North Hollywood, and this runner-up Costco Karen in Florida.

Of course, anti-maskers aren’t confined by gender. A Florida man lost his job after screaming at an elderly woman in Costco. A Nevada man was arrested after refusing to mask up in a casino. Then there’s former pro baseball player turned slacktavist, Aubrey Huff, who regularly tweet-storms about his constitutional rights being infringed upon, etc.

Everything in modernity is captured in some manner. That’s not entirely criticism; smartphone videos are a democratizing force. They hold people accountable when inside voices become pubic, either through words or actions. While this phenomenon sometimes results in a slippery slope into cancel culture, social media channels play an essential role in how we relate (or don’t relate) to one another.

This doesn’t give social media a free pass, as plenty of toxicity is brewed by quick fingertips. But the uptick in videos has lent renewed vigor to an old concept: shame. Specific to this moment, the shaming of anti-maskers. But does it work?

Tess Wilkinson-Ryan, a law and psychology professor at the University of Penn, writes that our “disgust should be aimed at governments and institutions, not at one another.” If our collective rage, confusion, and grief could be harnessed and used as a catalyst for political change, we would be in a very different situation. Her assessment that America is enduring a “failure of leadership” is an understatement.

Wilkinson-Ryan’s call for empathy over indignation is commendable, though we have to wonder if it meets this moment. She writes that shaming others for lack of social distancing is “useless or even harmful to society.” The question of shame requires cognitive reframing: it becomes too easy to blame people for making bad choices “rather than on people having bad choices.”

Jennifer Jacquet: How do You Punish Global Mega-Corp? Shame Them | WIRED 2014 | WIREDwww.youtube.com

She backs this up with research on the fact that we’re more likely to blame people of other races for standing too close and overestimating our own compliance with public health regulations while underestimating others. In conclusion, she calls for humility: don’t get so caught up in your biases that you overlook other people’s efforts. The real problem is “America’s half-hearted reopening,” the administration’s consistently inconsistent messages, lack of national regulations, and the weaponization of a pandemic.

Wilkinson-Ryan’s article is a fantastic example of what we should be focused on. But is shame really useless? I would argue no.

This goes back to differences between individualistic and collectivist societies. In her book, “Is Shame Necessary? New Uses for an Old Tool”, NYU associate professor Jennifer Jacquet points out that shame served as a “primitive emotion” that worked well in tribes restricted by Dunbar’s number. Shame is a powerful motivational tool if you’ll never know more than 150 people. Early societies were collectivist by default.

By contrast, guilt is experienced in private, away from the group—a marker of individualism. You need privacy to experience private emotions. Guilt, therefore, might be a Western emotional construct that evolved with large societies. Religions that evolved with it know the power of guilt. Yet does that mean we should leave shame behind? Jacquet argues against it.

She writes that the key is finding shame’s “sweet spot.” There are no clear “shame this, but don’t shame that” guidelines, though Jacquet notes seven habits of effective shaming.

“The transgression should (1) concern the audience, (2) deviate wildly from desired behavior, and (3) not be expected to be formally punished. The transgressor should (4) be sensitive to the group doing the shaming. And the shaming should (5) come from a respected source, (6) be directed where possible benefits are highest, and (7) be implemented conscientiously.” 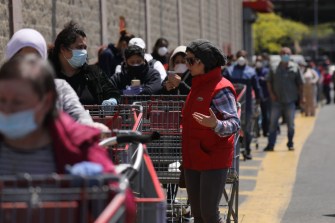 People wait in line outside of a Costco in Brooklyn on May 14, 2020 in New York City. Photo by Spencer Platt/Getty Images

Wearing a mask certainly concerns the audience, which is everyone. Refusing to mask deviates from desired behavior and is not formally punishable (though some cities are changing that due to non-compliance). Since masks have been politicized, number four is mostly off the table. Plenty of respected sources argue for masks, though that too is lost in the weaponization of masks (which also effects the last two habits).

Jacquet writes that acceptable shaming often focuses on “the powerful over the marginalized.” Yet no society has ever endured the reactive scrutiny of social media during a global pandemic. In a QAnon-fueled conspiracy theory-crazed culture, the powerful never look out for the marginalized, except in the deepest trenches where the president is considered a savior bringing forth a new age.

(This sounds insane, and it is, but it’s having real-world impact. I spend considerable time investigating conspiracy theories in the wellness community, and this theory is spreading on the Left and Right.)

Jacquet and Wilkinson-Ryan intersect in their desire to see our better angels emerge. As Jacquet concludes, there have been plenty of effective shaming campaigns, such as shaming fisherman for killing dolphins and manufacturers for poor working conditions. In each instance, a marginalized group (or animal) received better treatment.

Wilkinson-Ryan’s political assessment is spot-on, as marginalized communities need better leadership: the immuno-compromised, the elderly, the imprisoned, workers in the meatpacking industry. At the moment, however, our better angels are absent. That means shaming is one of the few tools in our arsenal that might provoke compliance. Or, as with anti-vaxxers, it might only make anti-maskers more committed to their lunacy. Tough call.

As Jacquet writes, “Shame’s service is to the group, and when it is used well and at the right time, it can make a society better off.” Since America can’t do any worse, some well-intentioned and thoughtful shaming might make an impact, in inches if not in miles.

Tags
coronaviruspoliticspsychologypublic healthsocial changeSocial distancing
In this article
coronaviruspoliticspsychologypublic healthsocial changeSocial distancing
Related
How to live after your soulmate has died
Astronomer Michelle Thaller explains the healing power of physics after losing her husband.
▸
7 min
—
with
Michelle Thaller
The Future
Space travel will radically change human psychology and spirituality
We are traveling in a realm that once exclusively belonged to the gods. Space travel will force humanity to rethink everything.
Neuropsych
Memory and the benefits of forgetting
Forgetfulness isn’t always a “glitch” in our memories; it can be a tool to help us make sense of the present and plan for the future.
The Learning Curve
5 Stoic quotes to help you through difficult times
“We suffer more often in the imagination than in reality.”
Stoicism: How to turn your sadness into strength
Chloé Valdary shares the ancient Stoic principle that can defeat modern despair.
▸
7 min
—
with
Chloé Valdary
Up Next
Neuropsych
Human brains remember certain words more easily than others
A study of the manner in which memory works turns up a surprising thing.