A just-released comparison of patent records and tax and school-district records has produced a stunning picture of a critical form of inequality in the U.S. The Equality of Opportunity project, led by the Stanford economist Raj Chetty, has found that children of families in the well-off 1% are 10 times more likely to file a patent application during their lifetimes than children of less affluent families. In addition, white kids are three times as likely to patent, and a whopping 82% of young inventors are male.

Together, these figures represent a loss of potentially millions of young “lost Einsteins.” The authors estimate the U.S. would have four times as many innovators if this disparity could be addressed. Fortunately, according to the same data, they see a fix: Regular exposure to innovation and innovators during childhood.

The researchers analyzed a new de-identified database of 1.2 million inventors in which patent records are linked to tax and school-district records. This allows the tracing of inventors’ lives from birth onward. The relationship to patenting and family wealth is stark. 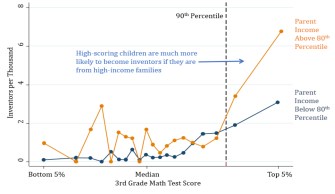 It’s not an issue of talent

The benefits of coming from wealth also show up in what happens to students from different economic classes with equally exceptional math talent over time. Kids who do well at math in 3rd grade are far more likely to become inventors, but only if they come from affluent families. “Put differently,” says the study, “becoming an inventor relies upon two things in America: excelling in math and science and having a rich family.” By high school the students’ scores dramatically diverge.

Patent rates by area where children grow up

One way to promote exposure to innovation during childhood is to live in the right area. The study identifies a correlation between geography and an innovative future. “Children who grow up in areas with more inventors — and are thereby more exposed to innovation while growing up — are much more likely to become inventors themselves.” More specifically, “Exposure influences not just whether a child grows up to become an inventor but also the type of inventions he or she produces.” People raised in Silicon Valley, though now living in, say, Boston are more likely to be inventors in computing-related fields. (Of course, family wealth is a prerequisite to living in the pricey Bay area.) Likewise, “those who grew up in Minneapolis — which has many medical device manufacturers — are especially likely to patent in medical devices.” 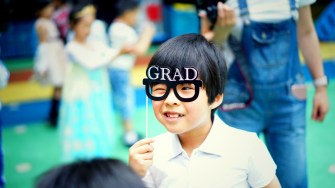 The data also show a strong influence of parents’ own innovative work on a child’s future patents. Especially striking, and demonstrating the connection, is that if a parent holds one or more patents, their child is likely to apply for patents in exactly the same field.

Encouragingly, while there are still many more male inventors than women, the gap is already shrinking. In a separate article in The Conversation, the authors of the study write that this disparity gets smaller every year. So looking forward, girls should have an ever-stronger likelihood of female inventors being around.

“If girls were exposed to female inventors during childhood at the same rate that boys are to male inventors, the gender gap in innovation would fall by half,” write the study authors.

In the era of A.I. and automation, what job skills do you …

In The Conversation article, the authors conclude: “Together, our findings call for greater focus on policies and programs to tap into our country’s underutilized talents by increasing exposure to innovation for girls and kids from underprivileged backgrounds. It may be particularly beneficial to focus on children who do well in math and science at early ages.” They single out mentorship programs and guidance counselors who consider kids’ long-term futures.

Certainly, the report makes clear that any parent who wants to foster a child’s innovative side should see if there are innovators nearby who can share their process with a curious young mind.

Tags
educationgenderInequalityinnovationinventionmathpolicy
In this article
educationgenderInequalityinnovationinventionmathpolicy
Related
The Future
How a device transmits radio waves with almost no power
Apart from the energy needed to flip the switch, no other energy is needed to transmit the information.
The Future
How the metaverse will revolutionize K-12 and higher education
Imagine going on a tour through the human circulatory system as a tiny cell. That is just one example of education in the metaverse.
The Present
How heat pumps of the 1800s are becoming the technology of the future
Innovative thinking has done away with problems that long dogged the electric devices — and both scientists and environmentalists are excited about the possibilities.
The Learning Curve
The art of asking the right questions
The right questions are those sparked from the joy of discovery.
Starts With A Bang
This one-page calendar will change how you view the year
It’s simpler, more compact, and reusable from year-to-year in a way that no other calendar is. Here’s both how it works and how to use it.
Up Next
Health
Why are girls hitting puberty earlier? The answer could lie in the medicine cabinet.
Mothers who tested positive for chemicals found in common cosmetic products were more likely to have girls who hit puberty early.