Earlier this month, a man shot a police officer in Pell City, Alabama, and fled the scene. Police didn’t know who the shooter was, but witnesses were able to describe his car and license plate. The suspect was arrested just hours later.

One factor that helped officers make the quick arrest was the Flock Safety system, which operates a network of cameras that track car movements by reading license plates. After plugging in the suspect’s tag number, Pell City officers were not only able to see where the car went in their own city, but also in nearby Heflin.

About 400 U.S. law enforcement agencies currently use Flock Safety cameras. Now, the company wants to give those agencies the option to connect to one network, the “Total Analytics Law Officers Network,” or TALON. This opt-in network would potentially allow law enforcement agencies nationwide to track a car as it drives from coast to coast, assuming it passes through the 700 American cities that have installed Flock Safety cameras.

Map tracking the car movements of a murder suspect in Alabama.Flock Safety

Flock Safety says its cameras help police solve more crimes. The company website notes that “70% of crime involves a vehicle” and law enforcement agencies say “a license plate is the best piece of evidence to track leads and solve crimes.”

But critics of Flock Safety have raised concerns over the potential for errors and abuse. In August, for example, police in Colorado held a family at gunpoint after a license plate reader flagged a car as stolen. It turned out to be the wrong vehicle.

With TALON, police would also have unprecedented information about the movements of citizens. It’s not hard to see how this data could be abused. Think, for example, of the Florida police officer who used the Driver and Vehicle Information Database (D.A.V.I.D.) to get women’s contact information so he could ask them out on dates.

Flock Safety says it designed its system under an “ethical framework,” noting that it deletes data on car movements every 30 days. The company also says its customers (which include private neighborhoods, in addition to police departments) own 100 percent of the data.

But the company can’t guarantee that the public gets a say in whether to install the system. What’s more, even if constituents had accepted Flock Safety being installed cameras in their own community, they might not want police to join TALON, which would put their local data on the national radar. 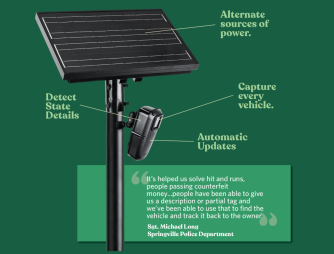 It’s currently unclear how many police departments plan to join TALON. But like the advent of facial recognition technologies, the spread of automatic license plate reader technology highlights how mass surveillance isn’t always driven by the state.

“We often think of dystopian surveillance as something that’s imposed by an authoritarian government,” Evan Greer, deputy director of the digital rights group Fight for the Future, told CNET. “It’s clearer every day that there is an enormous threat posed by privately owned and managed surveillance regimes, which will be weaponized by the rich and powerful to protect not just their wealth but the exploitative system that helped them amass it.”

A new study shows that naming conventions will change how infants represent objects in their memories.