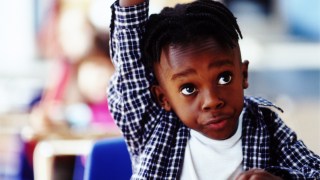 The Basis of Education Should Be Questions, Not Answers

Can democracy remain vibrant if the public, and especially children, don't have the tools to distinguish sense from nonsense?
▸
6 min
—
with
Lawrence M. Krauss

“You can get more information in your cell phone now than you can in any school, but you can also get more misinformation,” says American-Canadian theoretical physicist Lawrence Krauss. And he’s right: we’re in an era where any human can access a previously unimaginable wealth of knowledge. This access has grown faster than our ability to process it critically, however, and what we lack is any decent filter to weed out erroneous or partisan information. Children are the most susceptible to this, and Krauss argues that teaching children how to question information—essentially, how to make children skeptics—may save humanity from a dumbing-down. Lawrence Krauss’ most recent book is The Greatest Story Ever Told — So Far: Why Are We Here? Lawrence Krauss: One of the biggest surprises of the Internet is we thought when the Internet came out it would provide everyone new fundamental tools to learn about the world around them, and it would actually remove the censorship and information that we get. Before the Internet we used to get our news from three TV stations and it was carefully edited and carefully described, and after the Internet came out you could search news sources from around the world—great! The problem is the Internet also became a source of misinformation. There's that very famous cartoon that says, “On the Internet no one knows if you're a dog," with a dog typing on a typewriter. You don't know the source of your information, which is the beauty of it. It was the reason it was actually created by particle physicist working at the Large Hadron Collider, or at least CERN the laboratory where that now is, because thousands of physicists needed to communicate with information without caring about where the source came from.

But the fact that the source is shielded is, of course, a great concern nowadays in the political world among other things, and so we have to think about ways that we can address that.

Now, of course, information providers can try and work on that too, but we basically all have our own responsibility to become our own filters. And that's why it seems to me the educational system has to provide those tools, those filtering tools. And that's one of the reasons why I think science is so important because of its built-in filtering tools.

It recognizes that we all want to believe, and as Richard Feynman said, "The person you have to question most is yourself.” Knowing that you want to believe when you read something that validates your beliefs, you should be skeptical of it and your beliefs and you should look out for other sources.

So we have to train people that one source on the Internet is not good enough, you have to search broadly to see if it's validated. More over, you have to empirically test those ideas. If claims are made, you could look out and look at the data to see if those claims are validated.
We all have this new responsibility, because we have a sudden wealth of information, to become our own filters. And I can't see any way that we can move into an Internet-guided world where democracy remains vibrant if the public doesn't have the tools to distinguish sense from nonsense. And for me that's one of the reasons why I talk about science, because I think it provides us one of the key tools to do that.

One things seems very clear to me: education should not be left to private enterprise anymore than police or fire or military or in my opinion health because they're fundamental rights of people. And in a society that has the financial resources to provide individuals a safe and secure environment, which is really what government is all about, part of that is to educate young people. It's a right for every young person in a society, in a modern advanced industrial society, to receive an education. And that means not that we can't have the option of private education, but we have to ensure that students are provided opportunities to become the most productive adults they can be in a modern complex society.

That by the way doesn't mean treating science and other things as purely information, that's a mistake. We used to feel that schools were places that imparted information. Well, I can get more information in my cell phone now than I could in any school, but I could also get more misinformation. What we need to recognize is that science is not just a bunch of facts, but it's a process for deriving facts and it's a process to tell sense from nonsense.

What we need to provide students nowadays is a filter that they can use to assess all the information and misinformation they're barraged with so they can become responsible citizens. And that filter involves teaching kids how to question. Questioning is more important than answering it seems to me. When it comes to school we should teach kids how to question and say let's see how we could get the answer, let's skeptically ask questions, let's test our ideas, let's search through many sources.

Now, this should be the basis of any child's education today, that's public or private, but the government, of course, has to assure that students have at least equal opportunity. Students are going to achieve differently, but at least have equal opportunity access to education.
And that means we have to be able to account for all possible private education systems, some of which are frankly designed to keep students from thinking, to keep students believing some myth that may have existed a long time ago for fear that understanding how the universe really works might undermine their faith.

Well doing that is child abuse, because we're withholding literally resources that will help children become more effective adults. And so there's a very important role in government to ensure that all kids have equal opportunity access to the process by which we gain information. And then as they go out in the outside world they'll get lots of information. I received a PhD, but I will say even in physics most of what I know now I learned after I got my PhD.