The world does not have infinite resources. Yet as humans have exploded in population, from 1 billion in 1804 to nearly 8 billion today, we’ve treated the planet as our perpetual garden, leading to numerous problems, including overfishing. Over one-third of fisheries worldwide are pushed beyond their limits. Tragically, we continue to decimate populations year after year.

If we remain at the current pace, in a few decades all we’ll have left to eat is jellyfish—yet another consequence of climate change. Sure, some of the 200 species are edible, though there’s a reason you don’t see shortages of jellyfish poke. We need to be proactive and limit trawling and other environmentally damaging practices. We also need to innovate, as a few companies are doing.

Some recoil at the mere mention, yet that’s what innovation entails. We’ve gotten ourselves into this problem through technology—giant ships that drudge up entire ecosystems in a matter of hours—and technology might just help keep one of the most nutritious food sources on the planet in our diet. In the last half-century, oceanic “dead zones” have quadrupled due to human intervention. That practice cannot last.

While in countries like America, fish are a healthy option but not a necessity, many other countries rely on seafood as a main staple in their diet—according to the UN, 3.2 billion people. Beyond trawlers, warming ocean temperatures are destroying fish populations. This trend isn’t only destroying diets but entire economies as well.

Future of Food: This genetically engineered salmon may hit U.S. markets as early as 2020www.youtube.com

While cell-based beef is getting all the press, companies like BlueNalu recently raised $24.5 million in funding. The San Diego-based start-up extracts muscle cells from an anesthetized fish, treats the cells with enzymes in a culture, places the mixture in a nutrient solution in a bioreactor, spins it all around in a centrifuge, and finally 3D-prints the new concoction into the desired shape.

The goal isn’t to perfectly replicate a fish that you’d find on ice in your local market. No brain, skin, organs, or even possibility of consciousness are in this creature. In a strange twist, this makes cell-based seafood a potential food source for vegetarians and vegans, since the Adam fish can be returned to the waters unharmed.

One current solution to overfishing—fish farms—comes with it a host of problems, including the proliferation of sea lice, which have a tendency to escape the porous boundaries to infect wild fish. Bonus: with cell-based fish, you won’t run into any issues with mercury or microplastics.

What you’ll (hopefully) purchase is a good-tasting product, which has thus far been elusive. BlueNalu CEO, Lou Cooperhouse, is confident his company’s product will eventually meet standards set by your taste buds.

“Our medallions of yellowtail can be cooked via direct heat, steamed or even fried in oil; can be marinated in an acidified solution for applications like poke, ceviche, and kimchi, or can be prepared in the raw state.” 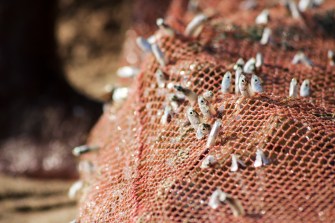 There are barriers, of course. As with pluripotent meats, cell-based fish are expensive. A spicy salmon roll produced by the start-up, Wildtype, cost $200 to make. It’s going to take a while for the price to drop and consumer demand to rise; estimates are five to ten years.

Another issue is indicative of solar power and wind energy trying to cut in on Big Oil: the seafood industry doesn’t want to lose its profit margin. Of course, like oil companies, Big Seafood is betting on a finite resource. The sooner they realize that, the better.

Then there’s production, which is where education comes into play. Former BlueNalu Chairman Chris Somogyi tries to demystify the laboratory process.

“We aren’t using CRISPR technology. We aren’t introducing new molecules into the diet. We’re not introducing a new entity that doesn’t exist in nature. The approval will be about whether this is safe, clean and are the manufacturing processes reliable and accountable.”

If there’s an ick factor to cell-based fish, remember that most processed foods are already created in laboratories. There are no Oreo trees or ketchup plants to harvest.

For now, these start-ups and others like them will have to figure out how to create non-energy-intensive and cost-prohibitive solutions for spinning up seafood inside of a petri dish. Novelty alone will create enough demand to get them going, as precedent in the lab-grown meat industry shows.

The reality is that we need to go down this path. There are too many humans and not enough resources. While we can hope (as David Attenborough does in his new Netflix documentary) that national governments will create more no-fish zones, there’s no guarantee that will happen. We need science to win this one.

A successful trial that tested a vaccine against bladder cancer in dogs could help develop a similar one for humans.
The Future

A “bio-battery” made from genetically engineered bacteria could store excess renewable energy and release it as needed.
The Present

One home was printed in 28 hours. Now, Alquist 3D is building 200 more.
Health

Mater certissima est – the mother is always certain.
The Present

Regardless of your age, incorporate the piano into your life for better health.