We’re drowning in statistics. More charts likely exist explaining gun violence in America than any other topic. Each one highlights the same issue: Americans have issues. This we know. When those issues involve firearms, we’re particularly ready to claim the American promise of being “number one.” No longer do we dominate in education, quality of life, happiness, life expectancy, or health care. But guns, we’ve got them.

The reasons are manifold; no one denies that. Speculating over why so many guns are fired in this country is useless. But that doesn’t stop some people from trying.

When asked if the right to bear arms is equivalent to free speech, Jordan Peterson replies that nothing is as essential as the right to free speech. His father, a hunter, collected 200 single-shot rifles because “he believes in aiming carefully.” Northwestern Canada, Peterson continues, is a rural, hunting culture, where “people take their guns seriously.”

The right to bear arms, he continues, is an integral part of a free society. If only the police and army are “allowed to be dangerous,” there’s going to be problems. He attempts to end his response there, then reconsiders.

This video is shot in the wake of the Las Vegas shooting on October 1, 2017, in which a lone gunman fired over 1,100 rounds into the Route 91 Harvest music festival. After killing 58 people and injuring another 851, the gunman killed himself. This was the deadliest mass shooting by a single individual in U.S. history.

Peterson notes that gun legislation debates kick off after incidents such as this, with “each side” hunkering down in their corner, refusing to budge. He continues,

“I think that it’s unfortunate to use an event like the Las Vegas shooting or the Columbine shooting to make political capital.”

It is Peterson’s belief that it is a right that the individual should be “allowed or even encouraged to be dangerous, but controlled.” He concludes this segment by encouraging individual responsibility, then references his audience to a biblical lecture he gave on Cain and Abel.

It’s not hatred for other people that drives someone to shoot down into a defenseless crowd from a hotel window; it’s hatred for being itself. Being embittered leads to outrage, which leads to becoming homicidal and even genocidal. Peterson speculates that such shooters are, in essence, out for “revenge against God for the outrage of creation.”

This isn’t the first time Peterson cited anger at a supreme being as the impetus for murder. When discussing a reckless driver navigating sidewalks in Toronto, killing 10 and injuring 16, he said the murderer, a self-proclaimed incel — “involuntary celibates” believe women are sexual objects and little else — was angry at God for the fact that women reject them. Murderous impulses, it appears, often stem from an offense by the Big Guy Upstairs.

The Las Vegas shooting could have been inspired by neurological pathology, he continues, though he believes the embitterment hypothesis is correct. He cites a Steven Pinker tweet that suggests that the media not publish the names of shooters. Peterson suggests this last-ditch arrogance provides an opportunity for them to be in the spotlight — their meaningless lives have amounted to something, however horrendous that thing might be. 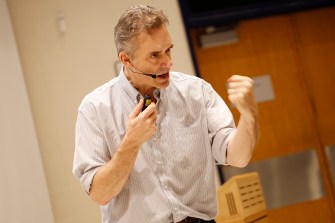 That is all to say Peterson appears to believe gun control is useless at best and dangerous at worst, given that it reduces our own opportunity for “dangerousness.” When asked if gun legislation would help stop school shootings, he replied:

“I think that in the United States the probability that gun legislation would stop the school shootings is basically zero. School-shooting culture doesn’t seem to have manifested itself in other places as much as it has in the U.S. And I can’t tell exactly why that is. It’s conceivable that it has something to do with the more rough and ready attitude towards guns.”

By the time I entered second grade in 1982, I walked the half-mile to Parkview Elementary. Two years later, the mile-plus walk to Joyce Kilmer was how I commuted for the next five years. Times change; today few parents would allow their young children to walk such distances in any suburb or city.

I also never experienced active shooter drills in school. This fact has not biased me against guns. I enjoy shooting skeet; while I’ve never hunted, I’d be open to trying. Given that I partake in the end cycle of animal life when consuming them, participating in the beginning would be both informative and valuable.

What I couldn’t imagine is standing in front of the parents of the children murdered in Sandy Hook, staring them in the eyes and pontificating about the “outrage of creation” or being mad at God for not getting laid. Yes, the country is divided in our reactions to gun control. Yet when the debate leaves the realm of basic human emotions, you have to question its worth.

Not that Peterson is necessarily wrong in this regard. The psychology of murder is as intense as the act of it. We just get so caught up in the debate we forget about the humans these violent actions affect. While I can’t imagine the need for owning 200 single-shot rifles, so be it if the hunting brings satisfaction and sustenance. But thinking this problem is going to work itself when more people take personal responsibility is simply ignorant.

Legislation matters. When laws allow for the mentally ill and emotionally disturbed to stockpile armaments, there is no need for debate. Basic common sense suffices — one would hope.

Paradoxically, we lose wars because the world is peaceful and the U.S. is powerful.
Up Next
Diversity & Inclusion

It’s a strange situation. In many American workplaces, it’s the sexual predators we protect, not their victims, according to journalist and author Gretchen Carlson. Since her landmark 2016 lawsuit against Fox […]