John Lewis Gaddis is the Robert A. Lovett Professor of History at Yale University, and was the founding director of the Brady-Johnson Program in Grand Strategy. His previous books include[…]
Go to Profile 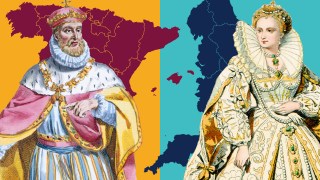 How Spanish, not English, was nearly the world’s language

The reason has to do with how the wind was blowing in a particular part of the world in August of 1588. It's that specific.
▸
5 min
—
with
John Lewis Gaddis

Want to know the reason much of North America speaks English and not Spanish? It all boils down to a single day in the English Channel in August of 1588, says Yale University history professor John Lewis Gaddis. The Spanish Armada was cleverly chased out of British waters by a rag-tag British fleet that set old ships on fire and pointed them right at the anchored Spanish fleet, causing the Spaniards to cut anchor and flee. Because of the way the wind was blowing, the Spanish ships had to sail all the way around the British Isles (about 2,000 nautical miles) to get home and were soundly defeated. That led, John posits, to the rise of the British empire. John’s latest book is the fascinating On Grand Strategy.

The reason I like to teach it is because Spain was the global superpower in that period. Spain had conquered almost the entire new world. Britain had not—England as it was at that time—had not even begun to develop colonies.

And the issue, of course, was Catholicism, and was Catholicism going to be brought back to England after it had been kicked out by Elizabeth’s father Henry VIII.

So this was what led Philip (believing that he was an agent of the Almighty) to send this largest of all naval forces north into the English Channel as a launch pad for the reconquest by Catholicism of England. And that’s August of 1588.

Elizabeth’s strategy was not to attempt to directly confront that fleet, because she didn’t have a fleet that was capable of doing that. She certainly could not have confronted directly a Spanish army because she had virtually no army of her own.But she is thinking in terms of geography. She’s thinking in terms of what direction the winds blow in normally in the English Channel.

And she saw that if she just allowed the Spanish fleet to advance slowly up the English Channel—which it had to do because it was cumbersome—with a few English ships pursuing it and then pick them off as they pursue, and then as they got up to the border of what’s now Belgium and France (where they were going to disembark their troops) realized that taking advantage of the winds, if you just set a few old English ships on fire with explosives on them and send them into the middle of this huge Spanish fleet, that’s going to cause terror and that in itself will be enough to defeat the Spanish.

So it’s all happening on one evening with the winds in the right direction with eight ships used, and the Spanish completely panicked to the extent of cutting their own anchor cables so more than 100 ships self-destructed in terms of losing control of the ability to navigate.

The only thing they could do then was to flee, but because of the winds, they had to flee around all of England, around Scotland, down the Irish coast. And by the time they staggered back into Spain they were profoundly depleted. That’s the turning point.

That’s the moment at which it can be said the Spanish Empire reached its high point and then started descending.

And it’s also the moment at which we can say the English began to become very gradually a superpower.

And I’m fascinated by the fact that it all can be reduced to a single night in the English Channel, and to the direction in which the winds blew. So that testifies to the importance of seizing the moment. It testifies to the importance of not micromanaging but macromanaging in the sense of delegating authority to the experts, in this case, her own sea captains. Trusting them to do the right thing. Trusting them to take advantage of spontaneous moments. They didn’t have time to consult Elizabeth about the fire ships.

They didn’t have time to wonder if they sacrificed eight ships, will she get mad and cut off their heads? They figured no, it’s unlikely because she’s a strategist herself. She will understand what that sacrifice achieved. And, of course, that’s what happened. So it’s her great triumph. It’s Spain’s great failure, and you can argue it leads to the development of North America by the British and to the fact that we are sitting here speaking English and not Spanish now.

The case for universal paid family leave is extremely convincing