Jason Fletcher is a Professor of Public Affairs with appointments in Sociology, Applied Economics and Population Health Sciences at University of Wisconsin-Madison. A specialist in health economics, economics of education[…]
Go to Profile 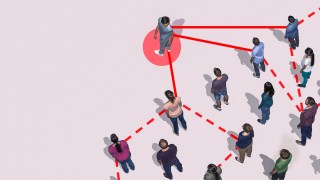 How Preventing One Suicide Can Save Many Lives

Recent research shows that suicidal behavior is a social contagion that spreads through families and classrooms. The good news? So does suicide prevention.
▸
5 min
—
with
Professor of Sociology, Applied Economics, and Population Health Sciences

Much of the research on suicide prevention focuses on individual risk factors—but what about suicide as a social contagion? Professor Jason Fletcher and colleagues decided to examine the social processes related to suicide and found that it spreads through families, and spills over into classrooms—and, most intriguingly, that it moves along gender lines. This seems like terrible news, but discovering this mechanism actually has policy implications for suicide prevention: “Successful suicide prevention programs have this potential for spilling over on people who aren’t treated themselves or who aren’t intervened on themselves,” Fletcher says. Preventing one suicide in a family can reduce the likelihood of an attempt for an adolescent within that family, but also for the adolescent’s classmates—that’s a pretty astonishing finding. If you are in crisis, please call the National Suicide Prevention Lifeline at 1-800-273-TALK (8255) or contact the Crisis Text Line by texting TALK to 741741, and to find support for yourself or a loved on, reach out to someone at The American Foundation for Suicide Prevention . This video was filmed as part of the Los Angeles Hope Festival, a collaboration between Big Think and Hope & Optimism.

Jason Fletcher: So we focus attention on some of the behaviors on the very dark side of the spectrum of hopefulness and optimism, which is suicidal behaviors. When we dug into that literature, we saw the importance of suicide as a cause of death for young people, and for teenagers it’s the number two cause of death for, I think, ages 15 to 19 in the United States.

A lot of the scholarship that’s focused on suicide has focused on individual risk factors—both genetics and the presence of physical and emotional pain—and what we wanted to do is think a little bit broader about social contagion and social processes related to suicide. Processes of social contagion and suicide have also been understudied because social contagion and social processes for adolescent suicide often come up in the news when a celebrity commits suicide, and there are public policies for the media not to report celebrity suicides in order to not have spikes of adolescents committing suicide as copycatting. More recently the media has being trained that if there is a celebrity suicide to report the story but also report hotlines and information for adolescents who are feeling the same way. So there’s a lot of public policy interest in the potential for contagion and suicide. So we focused some attention on that in our study, too.

So what we did was we surveyed data that had information on suicide, and to think about social processes, we found data that had not just your own suicidal attempts or suicidality but also whether or not family members had recently committed suicide. And our thinking was in order to trace a social process we wanted to see, in some sense, patient zero—which would be a family member having committed suicide—and then trace that through an adolescent social network. So we measured family suicides that occurred in a previous year. We examined the impact on the adolescents in the families that had family suicides, but then we pivoted and asked the question: do those family processes spill over into the classroom? So we examined the impact of having a classmate who had a family member commit suicide in the last year. And, again, we found very large effects that seemed to work through having a classmate’s family member commit suicide, affecting the classmate him or herself, it then spills over into the classroom on the suicidal behaviors of those who are not directly affected.

And the other surprising finding in that study was that these pathways between a family member committing suicide, an adolescent increasing their suicidality and then spilling over into the classroom is that that process only follows gender lines, meaning that if I’m a female student in a classroom it only matters to me whether females in my classroom had family members who’ve committed suicide. Having males in my classroom who had family members commit suicide does not affect my suicidality. So it’s a very intriguing and surprising finding. It says something both on the potential for spillovers for contagion in suicide but also that it’s a little bit more complicated because once it moves into the classroom I think these suicide contagions take advantage of preexisting networks where girls are friends with girls and boys are friends with boys inside classrooms, and when a bad thing happens to a classmate’s family then that news and those effects seem to travel on gender-specific lines. And similar to the child abuse examination where we found that family members or family processes spilled into the classroom, there’s a policy implication here that successful suicide prevention programs have this potential for spilling over on people who aren’t treated themselves or who aren’t intervened on themselves.

If you can successfully prevent a suicide in a family member that actually reduces the likelihood of a suicide attempt in both the adolescent in the family but also the adolescent’s classmates. So again this has the possibility of a larger bang for your buck where you spend money to reduce suicide or spend money to prevent suicide in a single family but you gain the benefits of both the family and the classmates of the family.

Does America Really Respect Its Military Men and Women?