Loud and roaring glaciers once populated the Icelandic shores. Their reign and permanence stood unquestioned for centuries — millennia. That is, until now. The glacier that was once known as Okjökull, colloquially referred to as “Ok,” saw its last day in the sun sometime in 2014.

Rising temperatures from the onslaught of the climate crisis has taken another victim. “Ok” was not the largest or most well-renowned glacier in Iceland, but it was historically significant enough to have been mentioned by early Viking settlers. Nearly a century ago, the glacier covered some 6 square miles and was about 165 feet thick, before dwindling down to a .4 square mile radius, with ice just shy of 50 feet deep.

A glacier is a compacted body of ice that accumulates greater mass every winter, while losing some in the summer. It’s constantly on the move but is able to support itself. Once a glacier stops, it enters its final melting countdown, never to be whole again. 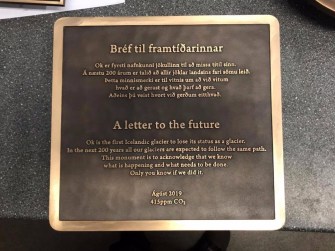 Glaciologists consider the remains of this glacier “dead ice.”

A group of locals and scientists have decided to eulogize the world’s first dead glacier with a plaque. It’s been led by author Andri Snær Magnason and geologist Oddur Sigurðsson. The sign will be installed on August 18th, 2019 at the former site.

Written in both Icelandic and English the plaque’s opening and closing statement is as follows:

“In the next 200 years, all our glaciers are expected to follow the same path… This monument is to acknowledge that we know what is happening and what needs to be done. Only you know if we did it.”

Speaking to The Guardian, Cymene Howe, associate professor of anthropology at Rice, stated that this would be one of the first monuments to a glacier felled by climate change.

“Frozen within them are histories of the atmosphere. They are also often important cultural forms that are full of significance,” she said.

Her colleague Dominic Boyer, warns that Okjökull’s fate will one day be shared by all of the glaciers in Iceland if we do not curb our greenhouse gas emissions.

The northernmost point of the globe is warming twice as fast as the rest of the planet. With last June being one of the hottest months of world record, scientists fear that we’re getting closer to a climate tipping point. One in which we’ll hit a runaway effect and the possibility of Iceland’s glaciers all being completely gone by 2200 — this, reportedly, would raise global sea levels by a centimeter.

Looking toward Greenland, we can see a fuller picture of the way local culture meshes with these important geological features. 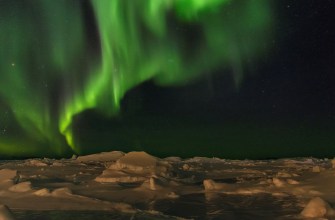 Sermeq Kujalleq, also known as the Jakobshavn Glacier, is one of the world’s fastest glaciers. Part of the greater Greenland ice sheet, it’s been around for more than 250,000 years. While it’s garnered a lot of tourism over the past decade, it’s also an integral part of the townsfolk who live around it. One local named Uffe Bang, says that he likes to take the time out at least twice a month to walk the trails and take in the scenery.

Great fishing in the fjord has attracted people to build settlements here for hundreds of years. During the Stone Age, a group of people called the Saqqaq lived here. European whalers docked in the 16th century, establishing trade posts in the Disko Bay. Today, the colony of Jakobshavn consists of some 4,500 people — the third largest city in Greenland and has since become the country’s most famous tourist spot.

The massive glacier has been receding since 1850. In the 20th century, the glacier withdrew eight miles — in the first 10 years of the 21st century, it has already receded an additional nine.

Sermeq Kujalleq, is safe for now. Glaciologists note that there has been a slight interruption in its long-term retreat. As the glacier is so large, it’ll likely be producing icebergs and still be a sight to see for hundreds of years. Ilulissat resident Casper Malchow remarked:

“It is a place that is good for the soul. Alone on the mountain with huge icebergs in the background and the sounds of whale playing in the icy water, it does something to you.”

Hopefully, the same will be said for Greenland’s Icelandic glacier brethren in the many years to come.

For decades, researchers have proposed that climate change and human-caused environmental destruction led to demographic collapse on Easter Island. That's probably false, according to new research.

The guilt-free air conditioning, called "cooling paper," is made from recyclable paper and doesn't use any electricity.

In France, ancient forests are resurging — growing bigger every year

France's forests are even creeping up on their major cities.