Food trucks are essential to Los Angeles. It’s difficult to drive a few blocks without stumbling into a handful; in my neighborhood, taco trucks reign supreme. About a dozen miles away over the Hollywood Hills, an ice cream truck has figured out a way to stand out, a challenging task in an oversaturated market: charge influencers double.

It wasn’t even a marketing ploy. The truck’s founder, Joe Nicchi, simply got fed up with “influencers” asking for free cones to share photos of on Instagram. Employing the hashtag #InfluencersAreGross, Nicchi, who drives one of CVT Soft Serve’s two trucks around the Valley (among other parts of Los Angeles), recently posted this sign on his truck. As he told The Guardian,

“We’re the anti-influencer influencers. It’s weird… but I think it’s really fun. I hope it inspires small businesses to hold their own and tell people to f— off.”

Nicchi, like many in the City of Angels, is an actor who needed to earn a living while hustling from audition to audition. Instead of going the usual route — instructing yoga replaced waiting tables years ago — he decided to appeal to our collective sweet tooth. He rolled out his first CVT truck in 2014.

Is there a dark side to social media influencers? | The Stream

Is there a dark side to social media influencers? | The Stream

It’s not only the $4 cone the greedy and privileged seek. One famous actor requested free ice cream for her entire crew in exchange for a photo. The whole idea is reminiscent of the rumor that Salvador Dali used to pay for his dinner by signing the bill instead of forking over cash. Yet Dali was not alive during a time when anyone can pay for tens of thousands of followers and then set up shop for doing nothing but snapping photos. The current story invokes less romance.

Beyond the demand for free stuff, influencer culture has become dangerous. Agencies are rushing in to manage and curate personalities, many of whom have no particular skills beyond looking appealing on camera. While there are certainly positive benefits to social media, such as women openly discussing overcoming eating disorders, there are plenty of factors working against the mental and physical health of the influenced.

Take Kim Kardashian’s recent announcement that she’s vegan. The context is not a war against animal cruelty; it’s not even about better health. She declared that a plant-based diet is the reason her waist is now skinny. Veganism is her response to the charge that she had ribs removed in order to fit into a particular dress.

The real issue is the revival of corset training, a 19th century fashion that carries a host of potential health issues, including breathing problems from lung restriction, atrophying of back and pectoral muscles, and the possibility of fractured ribs. That the influenced are putting their health at danger by wearing a device that does nothing to actually promote weight loss or better health is a shameless consequence of unfettered capitalism using social media posts as subterfuge. 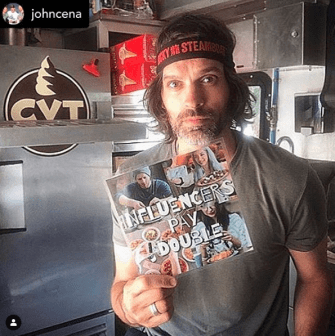 This is what happens when influencers wield #science without realizing a hashtag doesn’t actually reflect the real world. The Kardashians have a vested interest in followers buying corsets and it has nothing to do with health. Sponsorships and clothing lines are the motivating factor behind the revival of a practice that should have been left in the Victorian era, especially when we should be influenced by #equalpay, not looking like a cartoon.

Back in the real world, Nicchi notes that CVT would survive even if Instagram disappeared tomorrow. Not only will good ice cream outlast every silly trend, but the whole debacle points to something much more humane in us: supporting small businesses. He hopes the recent press will help influence the fact that small business owners don’t have to be held hostage to entitled clientele with loud fingers.

“There’s something so redeeming about outing influencers,” he says. “I hope that more people do not allow likes and comments and followers to hold weight in the business. I want people to go to a restaurant because the food and service is fantastic.”

The media is deliberately pushing your buttons.
Health

Black women are 3x more likely to die giving birth. Here’s one plan to fix that.
▸
7 min
—
with
Michael Dowling
Up Next
Starts With A Bang

New Method For Tracing Dark Matter Reveals Its Location, Abundance As Never Before

When stars get ejected from galaxies within massive clusters, they go where the dark matter is.Dark matter is one of the greatest mysteries in the Universe, displaying its effects in every […]