We often think of evolution as taking place over extended periods of time as mutations prove themselves advantageous, or not. Mutations, though, are not rare things: They happen all the time. Scientists estimate that there were 37 trillion of them in your own body just over the last 24 hours. (It’s amazing more things don’t go wrong, right?) The characteristics we see in ourselves and other organisms are merely the latest winners in a wild and woolly mutation free-for-all competition, in which nature, or random chance, tries out many wonderful, bizarre, and ridiculous traits as things settle out over the long term.

Adaptations in response to changing environmental factors occur all the time, too: An attribute that may have been meaningless before may suddenly become very helpful. Here in the Anthropocene, animals are adapting to all sort of habitat changes we’ve imposed on them. While not yet long-term changes, necessarily, these characteristics suggest we may be having a considerable impact on the ongoing process of evolution in the world’s organisms. 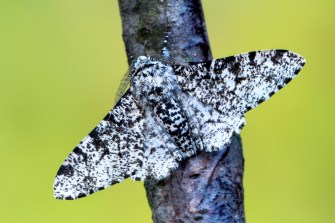 Pollutants — mostly coal soot —covered the British countryside, darkening its trees. Worse, sulfur dioxide emissions wiped out many of the trees’ lichen and moss coverings. Against these darkened backdrops, light-colored peppered moths became far too easy to spot by predators. Better suited were the darker peppered moths, which soon came to dominate the habitat — by 1895, some 95 percent of peppered moths spotted were the darker variety.

Fortunately, the Industrial Revolution days passed, with dirty factories over time being replaced by cleaner alternatives, and today, the light-colored peppered moths are back on top.

The story is a pretty fast-paced and dramatic example of how extreme our impact can be, and also — and there’s a hopeful feeling to this — how short-lived it can be if we fix what we’ve broken. 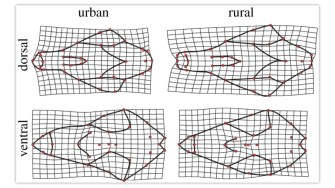 Researchers published in June a really interesting study regarding a surprising way in which foxes are adapting to life in human-dominated urban environments.

An examination of 111 red fox skulls from London, UK, revealed “urban individuals tending to have shorter and wider muzzles relative to rural individuals.” Essentially, the more urban a fox’s environment is, the shorter its snout was likely to be. The change may be considered an example of Darwin’s “domestication syndrome,” as Big Think previously reported.

The study suggests it’s all about the biomechanics benefits imparted by such a change:

“Firstly, a shorter snout, as found in urban foxes, should confer a higher mechanical advantage but with reduced closing speed of the jaw. This may be advantageous in an urban habitat where resources are more likely to be accessed as stationary patches of discarded human foods. Furthermore, in some cases, these foods may require a greater force to access them, explaining the expanded sagittal crest in skulls of urban foxes.”

If these traits make an individual fox better suited to its city life, it’s that much more likely to survive and reproduce than a longer-snouted competitor. 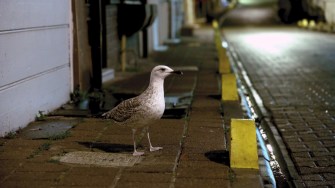 Habitat loss is the single most destructive thing we’re doing to animals. It can lead to utter displacement and death, and it can also change the way animals go about doing the things they need to do to survive.

In many cases, animals dealing with fresh human encroachment bend before they break, and some are trying to carry on around us, so to speak. A 2018 study in the journal Science finds, for example, that animals are becoming more nocturnal to get out of the bipeds’ way.

The authors of the study analyzed data from 76 other reports to learn how 62 species on six continents were trying to adapt to our intrusive presence. The data was sourced from all sorts of devices such as cameras to GPS trackers, and ran the gamut from ‘possums to pachyderms.

What the researchers found was that animals known to split their activities between day and night were overwhelmingly becoming busier after dark. There was a 68 percent increase in nighttime activity among such animals.

If this habitat pressure continues, will we start to see individuals with, for example, better night vision, come to dominate as competitors for scarce resources? It’ll be interesting to see.

When people say, “Such and such animal has this trait because it allows them to…” what they’re really saying is that “Of all the crazy mutations that nature tried out, individuals with this mutation fared better than others did.” Whether it’s effective camouflage, the ditching of a trunk, or becoming a night owl — except for owls who already… never mind — temporary adaptations become fixed evolutionary traits when the conditions in which they are beneficial remain in place long enough. In the case of the pressure we’re continually imposing on other life forms, it bears saying that only the ones lucky enough to survive humankind’s challenging influence in the first place will get that chance to change.

Hybrid animals emere when two different species from the same family reproduce. For many years, the kunga’s lineage was just another genetic mystery.
Neuropsych

With around 5,000 summertime residents, increased tourism, and a warming planet, it is becoming difficult to protect Antarctica from invasion.
Up Next
The Present

R.P. Eddy wrote about a coming pandemic in 2017. Why didn’t we listen?

In his book with Richard Clarke, “Warnings,” Eddy made clear this was inevitable.