How wide is the gender pay gap at some of the world’s largest companies?

For this year’s Equal Pay Day on March 31, the investment firm Arjuna Capital published a report on gender pay disparity that offers some answers. The firm’s Gender Pay Scorecard includes quantitative data on 50 major U.S. companies, such as Apple, Nike and Amazon.

Companies are graded based on five categories: adjusted gender pay gap, median gender pay gap, racial pay gap, coverage, and commitment (Coverage here refers to the extent to which a company’s disclosed pay data covers operations outside of the U.S.).

The most recent data from the U.S. Census Bureau shows that a woman working full time earns about 81.6 cents for every dollar a man earns, while her median annual earnings are about $9,766 less than his.

“The world’s largest corporations have come under intense pressure to close their gender and racial pay gaps in response to investor pressure, the #MeToo movement, and increasing public policy and regulation,” the report states. “This Equal Pay Day, we have compiled our third quantitative accounting of current pay disclosures, performance, and commitments among corporate leaders and laggards in four industries: finance, technology/communications, consumer, and healthcare.”

Of the 50 companies, only three received an “A” score: Starbucks, Mastercard and Citigroup. Meanwhile, 25 companies received an “F”, though it’s worth noting that 11 of those 25 companies didn’t disclose any data at all.

“Investors have effectively used shareholder dialogues and proposals to move this process forward,” the report states. “The continued growth of the gender and racial pay gap shareholder campaign, combined with an annual scorecard identifying industry leaders and laggards, will help improve corporate disclosure and practices, advancing the goal of pay equity.”

Arjuna and other parity advocates especially want companies to disclose a specific measure of the gender pay gap: the unadjusted median pay gap, which is the raw difference between the median earnings of men and women. In contrast, the adjusted pay gap controls for factors like age, educational attainment, geography, hours worked and seniority. The adjusted pay gap is almost always narrower than the unadjusted version, so companies tend to prefer reporting this measure. 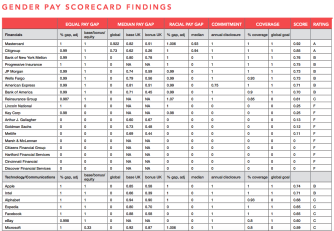 “The first step is for companies to analyze their current pay structures and disclose any gaps. Transparently addressing gender and racial pay gaps is essential to achieve pay equity and create more diverse companies.”

It depends on whom you ask. Some say that the bulk of the disparity stems from gender discrimination. Skeptics of the gender pay gap say it’s a total myth. Who’s closer to the truth?

Obviously, it’s complicated. There are many factors you could examine to find causes for the gap. For example, pregnant women have to take time off work, and mothers — for complex reasons, some of which are cultural — tend to spend more time caring for children. Both help to lower women’s overall earnings. Another potential cause lies in the body of research showing that men are more likely than women to negotiate salaries.

But one of the most compelling explanations for the gender pay gap is the fact that men and women make different career choices. On the whole, research on earnings between the genders shows that men tend to choose jobs in higher-pay industries, work more hours, work more dangerous jobs, and prioritize earnings over work-life balance.

Researchers at Harvard University recently conducted a study on gender pay disparity that focused on train and bus operators. The researchers wrote:

“Women value time away from work and flexibility more than men, taking more unpaid time off using the Family Medical Leave Act (FMLA) and working fewer overtime hours than men. When overtime hours are scheduled three months in advance, men and women work a similar number of hours; but when those hours are offered at the last minute, men work nearly twice as many. When selecting work schedules, women try to avoid weekend, holiday, and split shifts more than men. To avoid unfavorable work times, women prioritize their schedules over route safety and select routes with a higher probability of accidents. Women are less likely than men to game the scheduling system by trading off work hours at regular wages for overtime hours at premium wages.”

The findings align with a major 2009 study conducted by the U.S. Department of Labor, which examined more than 50 peer-reviewed papers on the nation’s gender pay gap. It found that the gender pay gap disparity “may be almost entirely the result of individual choices being made by both male and female workers.” 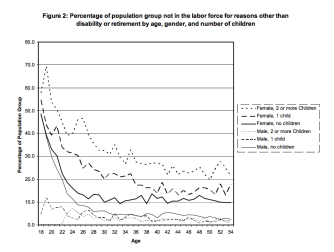 But that doesn’t prove that gender discrimination is nonexistent in the workplace. After all, even statistically adjusted data shows a gender pay gap. Additionally, biased cultural forces may partly explain why women make certain career choices; for example, some research suggests that women are encouraged not to pursue careers in science and engineering at a young age.

But what the research does conclusively show is that anyone who says the gender pay gap is completely a myth or completely a societal injustice is oversimplifying the issue.

The Knights Templar were not only skilled fighters, but also clever bankers who played a crucial role in the development of Europe’s financial systems.
Videos

‘The Broad and Narrow Way’ helped 19th-century preachers explain the consequences of virtue and vice.