The end of the 20th century was the high-water mark for global democracy. The Soviet Union had collapsed. Nearly all of Latin America, along with many Asian nations, had moved away from dictatorships and conflict during the “third wave” of democratization. And the U.S. — the world’s chief pusher of democracy — was a virtually unchallenged superpower.

But since 2006, the quality of democracies has been degrading as the world undergoes a “global democratic recession,” says a new paper published in the journal Democratization.

“Not only have average levels of freedom (or democratic quality) been declining globally and in most parts of the world, but the pace of democratic breakdown accelerated and the number of democratic transitions declined, particularly in the past five years,” writes sociologist and study author Larry Diamond.

What are the signs that democracy has declined over the past 14 years? The paper offers three:

Democracy stopped expanding: Since 2006, “the proportion of democracies in the world has gradually declined, to 55% of all states and 48% of states above one million population. And the percentage of people living in democracies has declined from 55% to 47%. The year 2019 marked the first time since the end of the Cold War that the majority of states over one million population was not democratic, and also the first time that a majority of the world’s people did not live in a democracy.”

Democratic freedoms have receded: Four different scales that measure levels of democracy — Freedom House, the Economist Intelligence Unit, and V-Dem’s Liberal and Electoral Democracy indices — “agree that there has been a modest negative trend for the advanced Anglophone and West European democracies, a more substantial slide for countries in Latin America and the Caribbean above one million population, and erosion – but of widely varying extent – in Sub-Saharan Africa.” Meanwhile, those same scales found significant improves in freedom among South Asian and former Soviet nations.

Democratic breakdown has accelerated: The past five years have seen more democracies crumble than any other five-year period since the third wave of democratization began in the mid-1970s. During that same period, the number of nations that switched to democracy was the lowest it’s been in decades.

The paper notes that, while military leaders and revolutions have toppled past democracies, the past decade or so “has mainly been an era of civilian assaults on democracy.” In other words, it seems as if a large share of citizens in democratic nations are — wittingly or unwittingly — supporting the erosion of democracy, at least as it currently exists.

Populist candidates, Diamond suggests, have been able to rise to power by “inflaming divisions and mobilizing the good, deserving ‘people’ against corrupt elites – the professional or ‘deep’ state and their effete, educated handmaidens in the other (liberal) political parties – as well as a host of alien threats, such as international institutions, refugees and migrants, and ‘undeserving’ minorities who really don’t ‘belong’ in the country.”

Noting there’s no “master” explanation for the democratic recession, the paper outlines several potential contributors, including:

The erosion of political norms and institutions: Autocrats tend to have an easier time gaining power when political parties are weak, citizens aren’t committed to democratic ideals, the rule of law is weak, and there’s a lack of horizontal accountability, such as independent courts and legislatures.

International context: Amid the chaos and failures of the U.S. invasion of Afghanistan and Iraq, the world began to adopt a more “pessimistic view of democracy promotion.” The 2008 recession had a similar effect. Diamond wrote: “If the world’s most powerful democracy could spawn a financial crisis that almost produced a global depression; if the world’s largest collection of democracies (the E.U.) could not manage its borders or accommodate the rising tide of refugees and migrants due to wars and revolutions, then maybe democracy was not such a great system after all.” 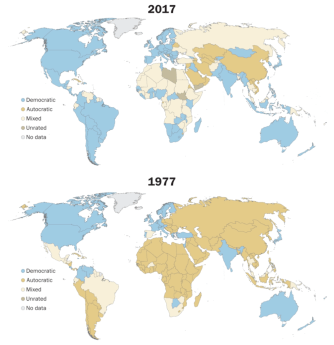 Comparison of Democratic versus other types of governments in 1977 and 2017Credit: Pew Research Center

Russian rage and Chinese ambition: Although the U.S. remains a superpower, these two “authoritarian projects” are working to undermine liberal values around the world by using “sharp power,” which the paper defines as operating “in the shadows to compromise institutions,” unlike soft power, which “seeks to inspire and persuade transparently though attraction and the power of example.” 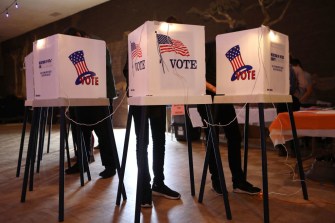 Diamond concludes the paper by warning that the global community is “perilously close to and indeed have probably already entered what [Samuel P. Huntington] would have called a ‘third reverse wave,’ that is, a period in world history in which the number of transitions away from democracy significantly outnumber those to democracy.”

According to survey results, most people seem to value democratic rights, yet more than half of citizens in the U.S., U.K., Japan, and France say they’re dissatisfied with democracy. Of course, that doesn’t necessarily mean people want autocracy.

But it does beg the question: What kinds of leaders and governing styles will dissatisfied citizens be willing to entertain — or unwilling to resist — if democracy doesn’t find a way to reinvent itself in the 21st century?

The questions about which massive structures to build, and where, are actually very hard to answer. Infrastructure is always about the future: It takes years to construct, and lasts for years beyond that.
The Future

Think of a combination of immersive virtual reality, an online role-playing game, and the internet.
Up Next
Neuropsych