Ever since Homo erectus carved a piece of stone into a tool, the welfare of humanity has been on the increase.

This technological breakthrough led first to the hand axe, and eventually to the iPhone. We have found it convenient to organize the most dramatic period of change between these two inventions – beginning roughly in the year 1760 – into four industrial revolutions.

As each revolution unfolded, dire predictions of massive job losses ensued, increasing each time. The first three are over, and these concerns were clearly misplaced. The number of jobs increased each time, as did living standards and every other social indicator.

McKinsey predicts that 800 million workers could be displaced in 42 countries, or a third of the workforce, because of the Fourth Industrial Revolution (4IR). When reminded of the experience with the previous revolutions, the comeback is often that this one is different. Although this has been said at the onset of each revolution, could there be something more to it this time?

Disruptive technologies such as artificial intelligence, robotics, blockchain and 3D printing are indeed transforming social, economic and political systems, often in unpredictable ways. The technology itself is difficult to map because its growth rate could be exponential, factorial or higher. It is this unpredictability that is making impact assessments difficult. Difficult – but not impossible.

To begin with, we know that a lot of low-skilled, repetitive jobs are being automated, starting in high-wage countries but quickly spreading to the developing world. And not all high-skilled jobs are immune either.

But are there limits? To answer this question, we need first to understand how work has been transformed, especially with global value chains. Jobs now consist of a bundle of tasks, and this is true for all skill levels. As long as one of the multitude of tasks that a worker performs cannot be technically and economically automated, then that job is probably safe. And there are a lot of jobs like that, although it may not appear so on the surface.

For example, although most tasks performed by waiters can be automated, human interaction is still required. Human hands are also highly complex and scientists have yet to replicate the tactile sensors of animal skin. The robot may deliver your soup, but struggle to place it on your table without spilling it. Apart from what vending machines can dispense, some of the tasks associated with waiting tables will still require humans.

The debate also tends to wrongly focus on gross rather than net jobs, usually unintentionally. But it is the net figure that matters in this debate. 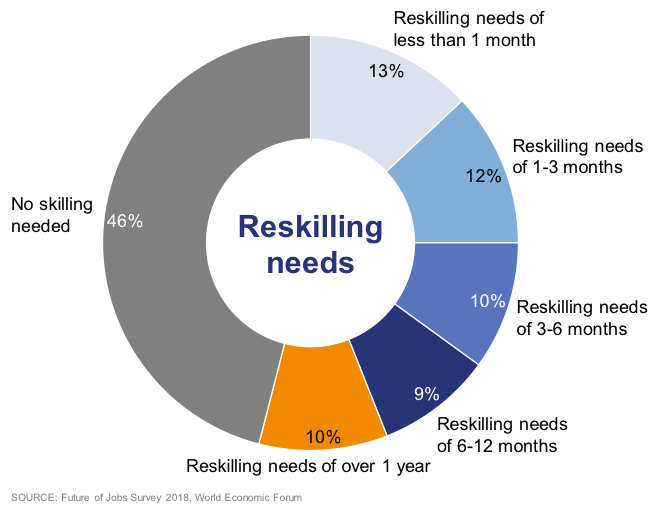 For instance, greater automation of production processes will require greater supervision and quality control. Humans will be required to carry out this function. The focus on gross ignores the higher skilled jobs created directly as a result of greater automation.

And as long as the cost of adding more supervisors does not outweigh the savings from automation, the reduction in the price of the final product will spur an increase in demand. If the increase in demand is large enough, it could even expand the number of jobs in factories that automate part, but not all, of their production process. In this case, the automation leads to a net increase in jobs.

There will also be inter-industry effects. Productivity gains from new technology in one industry can lower production costs in others through input–output linkages, contributing to increased demand and employment across industries. Higher demand and more production in one industry raises demand for other industries, and on it goes.

Why, then, the widespread pessimism about the 4IR and jobs?

It could be that it is easier to see how existing jobs may be lost to automation than it is to imagine how new ones may emerge sometime in the future. Simply put, seeing is believing. In a sense, this is like the gross versus net confusion, but separated by time and greater uncertainty.

It is also more sensational to highlight the job-displacing possibilities than the job-creating ones. We also hear more about it because, while the benefits are widely dispersed across the general public through lower prices, the costs are concentrated and can displace low-skilled workers, providing greater incentive to organize and lobby against or complain about the costs.

Furthermore, when there is enough uncertainty, it is generally safer to overstate rather than understate the potential cost to innocent victims of change. All of these factors could combine to explain the unwarranted pessimism over jobs.

But there could be a silver lining to all this negativity. If it leads to greater efforts to reskill and reshape the workforce to better adapt to change, then this is exactly what is required, and there is no overdoing it. Ironically, it could well be this pessimism that produces the preparedness that results in it being misplaced – if not to begin with, then in the end!

Jayant Menon is Lead Economist at the Asian Development Bank, and Adjunct Fellow of the Crawford School, The Australian National University.

Tags
economicsglobal developmentmanufacturingwork
In this article
economicsglobal developmentmanufacturingwork
Related
The Past
How people crossed the Atlantic Ocean before commercial aviation
For centuries, the only way to travel between the Old and New World was through ships like the RMS Lusitania. Experiences varied wildly depending on your income.
The Past
How the crusades spawned the world’s first financial services company
The Knights Templar were not only skilled fighters, but also clever bankers who played a crucial role in the development of Europe’s financial systems.
The #1 thing employees want at work
Here’s how to design a work environment that gives control to employees and stimulates open conversation.
▸
with
Todd Rose
The Big Think Interview
Why so many people work “bullshit jobs”
Experts say we should only be working 15 hours per week, so why are some working 80?
▸
6 min
—
with
James Suzman
The Present
To the moon? Five microeconomic lessons from Bitcoin
Bitcoin is often derided as volatile, but a new report suggests there is a method to the madness.
Up Next
The Present
How to best leverage being a self-directed learner on your resume
Showcase self taught skills.