Isn’t it nice when complicated problems have simple solutions? Take, for example, our diets. There’s a confoundingly large amount of research on what goes into a healthy diet, and fads such as the Atkins, keto, and paleo diets all claim to be the easiest, best, and one true way to lose weight and stay healthy. But really, all of the critical information one needs to stay healthy was summed up in seven words by the journalist Michael Pollan: “Eat food. Not too much. Mostly plants.”

Easy! Now you don’t have to buy new diet books every five years. But those seven words might also be a simple answer to an even more complex problem: Climate change.

In October of 2018, the UN Intergovernmental Panel on Climate Change released an extremely gloomy report. In it, researchers wrote that humanity has just 12 short years to change our behavior in order to limit global warming to a tolerable — although still dangerous — 1.5 degrees Celsius. If we can’t do that, we can say goodbye to coral reefs, and say hello to increasingly extreme weather events, sea level rises between 33 and hundreds of feet, and an equator too hot for most forms of life. 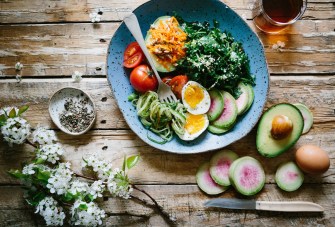 Photo by Brooke Lark on Unsplash

What can we do?

It may feel like an individual can’t do too much to make a contribution. But fortunately, changing your diet is something everybody can do. Based on the report’s findings, we can drastically cut emissions and pollution if we switch to “flexitarianism.”

Flexitarianism is just a flexible form of vegetarianism. You don’t have to give up meat, you just have to follow the last part of Michael Pollan’s advice: For the most part, eat plants. If that doesn’t seem feasible, we can still mostly eat meat so long as we take more care in what kind of meat we eat. 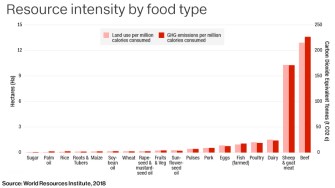 Rice, roots and tubers, and corn are among the least-polluting types of food. Dairy, sheep, and beef, however, are particularly bad polluters. World Resources Institute, 2018.

This graph shows the amount of greenhouse gases produced by different foods and the amount of land they take up. A cursory glance shows you what you need to know — beef and sheep meat production are resource intensive. In a CNN interview, researcher Marco Springmann from the University of Oxford explained,

“Beef is more than 100 times as emissions-intensive as legumes. […] This is because a cow needs, on average, 10 kilograms of feed, often from grains, to grow 1 kilogram of body weight, and that feed will have required water, land and fertilizer inputs to grow.”

While digesting this resource-intensive feed, cows and sheep emit methane, a greenhouse gas that is 30 times as potent as carbon dioxide.

So, by either limiting how much beef and sheep they eat or cutting it out entirely, your average Joe can make sure there are still islands in the Caribbean for their kids to visit. Here’s some flexitarian techniques that can help. Photo by Peter Wendt on Unsplash

How to become a flexitarian

As the graph above showed, eating low-impact meats can make a big difference. Chicken, pork, and fish all contribute relatively minor amounts of greenhouse gases, and they’re healthier than beef too.

For those who can’t forgo a burger, try a beef-mushroom burger. Mushrooms retain water, have a meaty texture, and also pack that umami flavor you get from beef. Mixing mushrooms into the ground beef for a burger makes for an excellent combo that you may even enjoy more than a 100 percent beef burger. What’s more, if just 30 percent of every burger sold in America was made of mushrooms, it would have the same impact as taking 2.3 million cars off the road, retain the equivalent of 2.6 million Americans’ water consumption, and free up a portion of agricultural land larger than the state of Maryland.

There’s also many alternative, beef-free burgers. Lab-grown beef, as we covered in early December, is just beginning to be served in restaurants. Moreover, companies such as Memphis Meats, SuperMeat, and Mosa Meats are currently selling lab-grown beef.

The brave can try eating bug burgers, too, which are typically made of a mix of chickpeas and mealworms. If you’re feeling experimental, try to find an Ikea that’s offering their mealworm-based “neatball” as an alternative to their classic Swedish meatballs. And of course, there are plenty of vegetarian burgers being sold. The Beyond Burger looks and tastes like a beef burger, and it even “bleeds” beetroot juice.

It would be great if we could convince industry to stop polluting, if we could switch our power-grid to an entirely renewable system, or if every car was electric. In time, we might actually manage to realize some of these goals, but they will require coordinated and persistent effort. In the meantime, going flexitarian might be the best thing any person can do to prevent climate change.

Explaining Your Failures Is Key to Succeeding

Door-to-door brush salesman Norman Hall had a unique way of explaining what his day is like to Dan Pink, author of Drive: The Surprising Truth About What Motivates Us. Hall […]