Tesla CEO Elon Musk wants “a few hundred” more people to test out the company’s new Autopilot Hardware 3, the long-awaited neural net technology that the company has said will give cars “Full Self-Driving Capability” for $8,000 plus the price of the car.

It’s been hard to pin down details about Hardware 3. Musk had once promised that Tesla cars would be able to provide a coast-to-coast autonomous drive by the end of 2017. Of course, that never happened, though the cars do offer limited self-driving capabilities, including:

In September, Tesla announced that it planned to use a team of internal testers to test an early version of Hardware 3. One month later, the company removed an option from its website that let customers pre-order “Full Self-Driving Capability.” Musk said the controversial option was “causing too much confusion.”

Now, an internal Tesla message, ostensibly from Musk, shows that the company is offering to swap out Hardware 2 for Hardware 3 in the cars of anyone, customers or employees, who chooses to participate in the testing program. It’s the “last time the offer will be made,” the message reads. 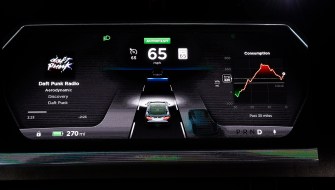 It’s unclear, exactly. The website 1reddrop, which covers Tesla news and technology, wrote that Tesla is focusing on improving GPS technology, and that increased computing power in Hardware 3 will translate to lower latency and quicker reaction times. Also, it could enable the cars to keep better live maps of roads:

Every Tesla with Autopilot engaged sends a ton of information back to the company’s servers, and this information can be used to maintain live maps that are constantly being updated.

The biggest problem for Tesla right now is reliability. Autopilot hardware 2 and 2.5 are now stretched to their physical limits, but Autopilot Hardware 3 will be far more powerful in that it can process a lot of the information on-board.

Whether this means Teslas will be fully self-driving remains an open question. It also depends on how you define the term.

​The Society of Automotive Engineers’ 6 levels of driving automation

1reddrop wrote that the new update could “decisively bring Tesla into Level 4 territory. If they succeed within the projected timeline, Tesla could become the world’s first automaker with a fully autonomous (by SAE standards) fleet on the road in 2019.”

It is often assumed that AI will become so advanced that the technology will be able to do anything. In reality, there are limits.
Hard Science

A levitating vehicle might someday explore the moon, asteroids, and other airless planetary surfaces.
Up Next
The Present

Fake news is everywhere. Even in places that were once legitimate.

Consider the decline and fall of the South China Morning Post.