By electrifying our most powerful sex organs, our brains, research has shown that provocative conversation has the ability to add serious sizzle to our sex lives. Yet, it’s a highly subjective form of bedroom art that comes in many varieties. In fact, one in five people admit that they have stopped sex cold because of the dirty talk. A chilling statistic. 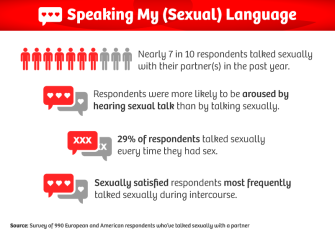 What’s hot and what’s not?

Participants said that a safe bet is not to start off with talk that’s too aggressive and too intimate too soon. What the study recommends is beginning slowly with suggestive, flirty questions paired with light touching. Perhaps the best received form of dirty talk is simply complimenting your partner’s performance as well as articulating what you want your partner to do to you, or what you want to do to your partner. “Respondents were quick to pay appreciation to times when a partner articulated a sexual request or desire, with more people reporting that these phrases were a turn-on than any other form of dirty talk,” reports the study.

The biggest point of contention in the survey was nicknames, particularly of the derogatory variety (e.g. “whore”, “daddy”). These were the number one turn-off for some respondents, yet they were the number three turn-on for others. When it comes to the pet names, the message seems to be to proceed cautiously, starting off lighter (“sweetheart”, “baby”). You can always add spice, but if you cross the line you risk obliterating the mood and finding yourself among that unfortunate 1-in-5 statistic cited earlier. Setting boundaries through honest conversation is the safest way to navigate these waters. 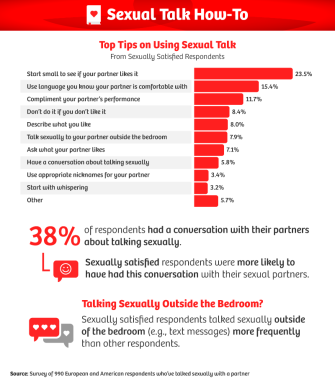 So, where do people learn the language of good dirty talk? According to 61% of the respondents, it was inspired by spur-of-the-moment events such as what their partner was doing at the time. The next top inspirations for men and women were previous partners and pornography.

This is your brain on dirty talk

So, why does dirty talk turn us on? It has to do with a few “erogenous zones” in the brain that effect how we respond to sex talk and sexual stimulation. Sex drive and testosterone production originate in two parts of the hypothalamus: the preoptic area and the suprachiasmatic nucleus. Dirty talk stimulates both of these areas.

“People very much enjoy dirty talking because it activates all regions of your brain while your body is also getting stimulated,” sex and neuropsychology expert Daryl Cioffi told Medical Daily in 2015. “Similar areas of the brain are touched upon during dirty talk as when we curse. So, very often as your brain sees it, the dirtier the better.”

Another important area in the brain is the amygdala, a fear center that plays a large role in the excitement and pleasure experienced during sex. Submissiveness in bed, such as being called names, can stimulate the amygdala by making a participant feel vulnerable.

Tags
communicationmenrelationshipsSexvulnerabilitywomen
In this article
communicationmenrelationshipsSexvulnerabilitywomen
Related
The Future
How a device transmits radio waves with almost no power
Apart from the energy needed to flip the switch, no other energy is needed to transmit the information.
The Well
How to articulate your thoughts effectively
Make it simple. Make it clear. Make it stick. Alan Alda on how to get everyone to understand your thoughts.
▸
5 min
—
with
Alan Alda
Life
How artificial intelligence is helping us decode animal languages
Communication among cetaceans, like whales and dolphins, looks especially promising.
Neuropsych
About 1 in 100 people stutter. What causes it?
The majority of children who stutter will spontaneously recover from it without intervention, but some 20% of people do not.
Neuropsych
How do lie detectors work?
Experts explain how lie detectors work, what happens in the brain when we tell lies and how accurate polygraph tests are.
Up Next
Starts With A Bang
The Expanding Universe Might Not Depend On How You Measure It, But When
It’s been called the biggest conundrum in all of cosmology, and recent measurements just add to the confusion.One of the most puzzling facts about the Universe is that different ways […]