Jen Schradie is a sociologist and Assistant Professor at the Observatoire sociologique du changement at Sciences Po in Paris. Her work has been featured on CNN and the BBC and[…]
Go to Profile 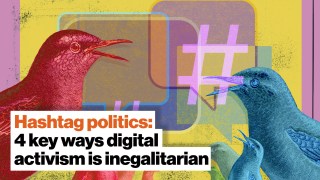 Many believe that the internet has made it easier for us to participate in political activism. But is that really true?
▸
6 min
—
with
Jen Schradie

JEN SCHRADIE: A key claim that's made around digital activism is that it is this more egalitarian space and also enables a wider variety of people to participate because of the lowered costs of participation. And this argument is made because of how expensive it is in terms of time and energy, for example, to print out flyers or go to a meeting to plan an event. Someone may need to pay bus fare or gas or pay for child care. And so many have argued that digital activism really lowers the costs for political participation. However, I found that this argument really doesn't consider the costs that people who may not already have a computer or a smartphone or high-speed internet access or a data plan that allows you to be on social media constantly, which uses up a lot of data, that these are very high costs for people who are struggling at the margins. And yes, certainly we hear reports of viral videos of working-class folks posting something, some injustice, and that's very real, but those are outliers compared to people who do have more resources who are able to engage on a regular basis. And what I found is that the middle- to upper-class groups were much more likely to have higher levels of online engagement than poor and working-class groups. And the reason is, first of all, organizationally.

So groups who have more middle- to upper-class members tended to just simply have more computers and skills and general resources, but I also found individual reasons. The individual members, they really lacked what I call ASETs. So they tended to lack access -- A for access. Some people had to drive, for example, 10 or 20 miles to their aunt's house who happened to have a computer, or they had to go to the library, or maybe they had a computer but it's not working so well. So basic access was important. So the next part of ASETs is S, skills. So really understanding the nuance of how Twitter works was really intimidating for people -- how the Facebook algorithm works. People talked about learning how -- maybe even going to a training to learn about how to build a website but not really being able to sustain those skills. But most people didn't even have those basic skills at all. The other issue that I think is really key and part of this ASETs -- so A-S-E -- is empowerment. So many people I talked to said, well, I'm not a computer person or I don't get up there in talking about Twitter, this very hierarchical sense of that's up there, I'm down here. That's not for me. One woman told me Twitter is too fast. I just can't keep up. And this idea of feeling entitled and empowered to engage in these tools that for middle- to upper-class folks just feel normalized or part of their everyday routines, but for a lot of people, it's much more challenging. But the other key point of ASETs is the last letter, T for time.

One worker I spoke with, young guy who's 25 years old. He was a nursing assistant at a mental hospital. And he had to drive into work. It took him a while. Lived in a very rural area. When he got to work, he had to hand over his cell phone, and he wasn't able to use it for his entire shift, sometimes up for 12 hours. And so if you think about then the time that it took for him to drive back home, he had very little time to be engaged online. And often digital politics happens very quickly. So for people who don't have consistent online access like many of us do who have a smartphone and a laptop and perhaps a tablet or other gadgets that can be substituted in if one isn't working, for example -- that's not always the case for a lot of people, and it's really important to remember that when we see a hashtag trending that that hashtag may not really be representative of people overall, especially the poor. And in the issue that I studied, I found over 60,000 tweets, and only one tweet was from a poor, working-class group, which is statistically zero

America’s education system is centuries old. Can we build something better?