Previous research has demonstrated that mother cows recognize and respond to the voices of their own offspring. Their calves, too, know their moms’ voices. A new study from the University of Sydney, however, reveals bovine communication goes far beyond mother and child. Each cow has a unique voice and “talks” with — sorry — her “cowlleagues” all the time, expressing a range of emotions about a variety of farmyard experiences. 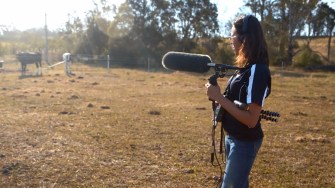 The herd is heard

Alexandra Green, a PhD student, is lead author of the study published in Scientific Reports. For her research, she recorded 333 vocalizations of 13 Holstein-Friesian heifers. She tells University of Sydney News, “We hope that through gaining knowledge of these vocalizations, farmers will be able to tune into the emotional state of their cattle, improving animal welfare.”

“This study shows that cattle vocal individuality of high-frequency calls is stable across different emotionally loaded farming contexts. Individual distinctiveness is likely to attract social support from conspecifics, and knowledge of these individuality cues could assist farmers in detecting individual cattle for welfare or production purposes.” — Green, et al

The study’s recordings were captured across five months at an Australian farm. They were captured by Green during cows’ estrus, during feed anticipation — a presumably happy moment — and during feed frustration as cattle were denied expected food. Vocalizations were also recorded when these social animals were individually isolated from their herd. 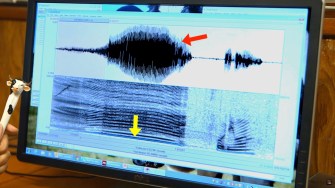 Green traveled to Saint-Etienne, France, where she worked with co-authors psychologist David Reby and bioacoustician and animal behaviorist Livio Favaro. Together, they analyzed her field recordings using Praat phonetics software, which produced visual representations of the audio, including an indicator of each voice’s fundamental pitch.

These analyses proved the uniqueness of each cow’s voice. For cattle farmer Neville Catt, on whose grounds the research was conducted, there’s no doubt who he’s hearing when a cow begins vocalizing. “Not only do I talk to cattle, I think they talk to me,” he says. One of the new insights Green’s study contributes is that the sound of each heifer’s voice is not limited to specific circumstances like parenting, but in fact remains constant for life. Says Green, “We found that cattle vocal individuality is relatively stable across different emotionally loaded farming contexts.”

“Cows are gregarious, social animals,” says Green. “In one sense it isn’t surprising they assert their individual identity throughout their life and not just during mother-calf imprinting. But this is the first time we have been able to analyze voice to have conclusive evidence of this trait.”

Getting to know Catt’s cows

In terms of the mechanics, says Green, cows produce calls in either of two ways. For up-close, quieter communication, their mouths remain closed, with the sound coming through their nasal passages as an “mmmmmmmm.” To call out to other cows not nearby, however, they pump up the volume by opening their mouths as they vocalize.

In the end, “They’ve all got their very distinct personalities You’ve got your chatty cows, you’ve got your shy cows. I’ve got one girl who won’t shut up,” Green says.

Green plans to incorporate the research into her doctorate that proposes utilizing her findings in dairy-farm welfare assessments. On a personal level, she hopes one day to feel qualified as a genuine “cow whisperer” specializing in — her word here — “cowmoonication.”

More than 90% of human faces are home to mites that live in our skin pores. These friendly guests might be merging with us.
Up Next
Health

Forthcoming Phase II trials with ibogaine aim to find out.