Ever since 1978, when the Chinese decided Maoism was nuts and that state capitalism was worth a shot, China has enjoyed meteoric economic growth and is now the second largest economy on Earth. While the median income is still low and millions of people still live as peasants, anybody standing in the Parkview Green mall in Beijing on singles day will see that capitalism has been fully embraced in China and that a large middle class has taken root and is consuming like never before.

As you might expect, there are tangible results of giving hundreds of millions of people buying power on a scale they have never had before. Chinese tourists are finally able to tour the world in a way that the populations of other countries have been doing for decades, with a few cultural difficulties along the way. Since 1981, half a billion people have been lifted out of extreme poverty and are now enjoying lifestyles unimaginable only a few decades before.

One thing you might not have expected is the effect these consumers have on our film industry, and how the Chinese government uses its buying power as a tool for self-promotion. 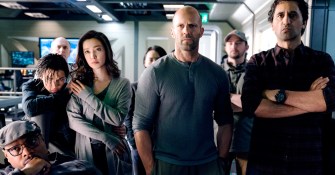 Jason Statham and Li Bingbing lead the cast of The MEG.

Wait, what? How do they do that?

Supply and demand combined with strict controls on what movies get into China. At the time of writing, only 34 major American films are allowed into China each year using a quota system. Since China is the world’s largest film market, getting into it is a very competitive business. Movies that the censors don’t like aren’t going to get in, giving them tremendous power over what money-chasing Hollywood executives are going to make.

You can circumvent the quota system by co-producing the film with a Chinese firm, which makes it a domestic film for quota purposes. This method has lots of strings attached though, as it requires a movie to have a certain number of Chinese actors, filming locations in China itself, and the film cannot portray China as a villain.

Some of the co-produced films it makes are big-ticket items. In 2018, the list included Mission: Impossible — Fallout,Venom, The MEG, and Pacific Rim: Uprising. Other blockbuster films from the last decade to be co-produced include Wonder Woman, Kung Fu Panda 3, and Looper.

How Far Can China Rise?

Why control the cinema?

The ability to decide what movies people can see in theaters has always been a staple of modern dictatorships, and China is no different. It merely takes the concept a few steps further. China not only assures that its population doesn’t see anti-communist messages in films, but it also works to make sure you don’t get the wrong idea about China either. It achieves this by applying pressure on the studios.

Larry Shinagawa, a professor at Hawaii Tokai International College, told The New York Times that, “You’re not going to see something that’s like ‘Seven Years in Tibet’ anymore,” as the studios are so concerned with keeping the censors happy they would never risk depicting China in a negative light in any film. When was the last time you saw a film where China was the villain?

Any studio that would seriously offend the censors runs the risk of seeing its other films locked out, leading to many cases where studios have altered plot points in hopes that its films won’t get blocked by the Chinese censors. For example, in the book World War Z, the global zombie plague begins in China, the utterly incompetent Politburo is nuked by a rogue officer, and Lhasa, Tibet is the largest city in the postwar world. In the film, the plague is implied to have begun in Korea and the other plot points aren’t even mentioned — all of which is very intentional.

In the 2012 film Red Dawn, the invading Chinese army was changed (at enormous cost) to a North Korean one in post-production after the Chinese government objected to being the bad guy.

Sometimes the edits are made even if the issue is a minor one. The movie Pixels initially had a scene where the Great Wall of China was to join other global monuments in being blown up, but in the final film it was swapped with the Taj Mahal, out of fear the scene would get the movie banned.

Other times scenes are added to get the film into China, despite making the film less attractive to foreign audiences. The writers of the movie Looper, which was co-produced by a Chinese firm, changed the location of some scenes from Paris to Shanghai to comply with the co-production laws and appeal to Chinese audiences. This required making two versions of the film, as some of the Shanghai scenes failed to resonate with Western viewers.

There are also bans placed on films in order to prevent dissent in mainland China itself. The Disney film Christopher Robinwas banned as part of a general strictness about Winnie the Pooh. This is motivated by a tendency on social media to point out a physical likeness between pooh bear and President Xi Jinping, and use Winne the Pooh as a satirical symbol for the leader in an attempt to get around the censors. I couldn’t make this up if I tried.

Why are they doing this?

At heart, this is a grab for soft power.

Soft power, “the ability of a country to persuade others to do what it wants without force or coercion,” is something that culturally influential countries and unions like the US or the EU have. It stands opposed to hard power, which is the ability to coerce another country with force, and can be used to promote your interests without making other countries too nervous about your intentions. After all, when is the last time you saw a Japanese cartoon and thought Japan was taking over?

China has been making a major soft power push on many fronts over the last few years. Confucius Institutes, learning centers to promote the Chinese language and culture, are a common sight on college campuses; Chinese investment is pouring into Africa; and explicitly Chinese films are trying to break into the mainstream. This attempt to introduce people to Chinese culture has not gone unnoticed or without controversy.

The results of this campaign have been mixed, and the highly successful cases are limited to the developing world, according to USC professor Stanley Rosen. However, China is pouring a lot of money into the effort to improve its image abroad. Squeezing Hollywood studios with threats of being locked out of the Chinese market into depicting China positively is just another way to acquire soft power without having to make convincing propaganda movies themselves. Given that 53% of Americans have a favorable view of China, the highest level in decades, this campaign is making some progress.

These tactics are nothing new. Several countries have programs similar to the Confucius Institute, and investment as a means of soft power is as old as modern diplomacy. Restrictions on references to Hitler have altered the plot-lines of more than one video game that needed to be sold in Germany. China’s size just makes these methods more powerful when it uses them.

Some of the things the Chinese government is doing are a little more nefarious than just trying to make itself look good. Richard Gere, the famed actor, activist, and an all-around officer and gentleman, is banned from entering China as a result of his activism in support of Tibetan independence. Gere also alleges that his career downturn was caused by Chinese pressure on major studios not to feature him.

Lady Gaga can’t visit China, and her music has been blacklisted because she hung out with the Dalai Lama when he visited Indianapolis. Katy Perry once wore sunflowers, symbols of Taiwanese independence and democracy, during a concert in Taipei, and earned an “indefinite” ban on entering Red China as a result. Maroon 5 had their Chinese shows canceled because one of them sent the Dalai Lama a birthday greeting on Twitter.

Brad Pitt is also banned from going to China as a result of making the film Seven Years in Tibet with David Thewlis, who also can’t get in. Pitt did visit in 2014 as the guest of Angelina Jolie, suggesting that his ban might not be deemed worth enforcing.

Given the amount of money these artists could make in the Chinese market, banning them over political statements is a powerful move that could frighten others into silence. Given the recent clampdowns on dissent in China as part of the sudden reversion back to ‘70s-esque authoritarianism, this might be precisely what the party leaders in Beijing want.

All of the actions described above lead to media outlets depicting China positively on their own accord. As Stephen Rosen explained to the Financial Times, “For the China market you self-censor because of its size.”

How China is changing Hollywood

The red menace is back, and it’s using supply and demand this time! The irony is overwhelming!

While China’s interest in influencing Hollywood is understandable from a PR standpoint, it is yet another element of China’s rise that came as a surprise to western observers. While it is unlikely that Hollywood films will start singing the praises of the 12 Virtues of Socialism anytime soon, you aren’t likely to see any movies that make China look bad in the near future.

Why? Well, would you do anything to prevent yourself form having access to 1.5 billion movie goers?

The Thucydides trap: What America gets wrong about China

Tags
Chinafilmforeign policyglobal developmentglobal issuesmediamovies
In this article
Chinafilmforeign policyglobal developmentglobal issuesmediamovies
Related
High Culture
The silent power of great movie soundtracks
Movie soundtracks don’t just help us recall the plot of a film; they also allow us to better understand its meaning.
The Present
Rare earth war: can the U.S. even compete with China?
China’s dominance of the rare earth metal industry is part of its overall geopolitical strategy.
The Present
How the U.S. reinvented the notion of empire
Preferring “bases not places,” the U.S. does not really resemble the empires of old.
The Future
The metaverse: From science fiction to virtual reality
Think of a combination of immersive virtual reality, an online role-playing game, and the internet.
The Present
Why the U.S. is trapped in “endless war”
Instead of just Afghanistan, the U.S. military ought to withdraw from the entire Middle East and much of the rest of the world.
Up Next
Neuropsych
Video games and the paradox of failure
The paradox of failure explains why even a healthy rage-quit won’t keep a good gamer down.