While the physical effects of COVID-19 have dominated headlines for the last 13 months, mental health effects are considered a simultaneous pandemic that could outlast the virus. Children have generally been resilient against the novel coronavirus (though at least one variant is hitting that demographic harder). In terms of depression and anxiety, however, children are on par with adults.

Emergency hospital visits for mental health issues in the 12-to-17-year-old demographic have jumped 31 percent since the pandemic began. Younger children have fared only slightly better: a 24 percent increase for children ages 5 to 11. In Germany, one in three children has suffered anxiety or depression over the past year. On top of this, children are having trouble learning in remote education environments.

However, at least one demographic fared better than normal, at least during the early phase of lockdowns. According to a new study, published in the Journal of the American Academy of Child and Adolescent Psychiatry, middle school children from a predominantly Latinx community with higher-than-normal levels of mental distress experienced a reduction in symptoms.

Those without mental health issues benefited as well, at least in terms of internalizing and overall behavior; there was no change in attentional issues or externalizing.

The researchers began tracking 322 children (average age 12) in January 2020, before the pandemic took hold in America. They were studied until May 2020. While this only represents a sliver of time in lockdown, senior author Carla Sharp, a psychology professor at the University of Houston, says the results have important clinical implications.

“First, promoting family functioning during COVID-19 may have helped protect or improve youth mental health during the pandemic. Further, it is important to consider cultural factors, such as familism and collectivism in Latinx communities that may buffer the early effects of disasters on mental health to COVID-19 stress.” 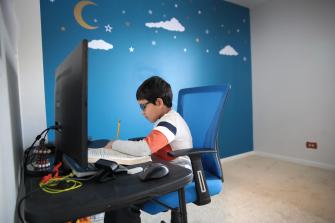 Seven-year-old Hamza Haqqani, a 2nd-grade student at Al-Huda Academy, uses a computer to participate in an E-learning class with his teacher and classmates while at his home on May 01, 2020 in Bartlett, Illinois.Photo by Scott Olson/Getty Images

Many have decried what we’ve lost during this past year. Indeed, the issues are many and complex. Yet we’ve also seen reductions in environmental damage (including noise pollution) and increased savings. We also have a greater awareness of how factory farming helps viruses proliferate. And, despite the obvious challenges of earning a living with so many businesses and industries shuttered, this time has afforded some an opportunity to reconnect with their family.

“Our findings underline the importance of the family environment and Latinx collectivist values of community connection for promoting child resilience and brings into stark focus the possibility that school environments may exacerbate mental health difficulties. Removal from that context into a less pressured environment immediately and positively impacts mental health.”

Since the study ended shortly into the pandemic, the novelty of family togetherness could have diminished as families became economically strained and realized that spending all their time together was more taxing than initially imagined. That said, humans are social animals that require regular contact with family and peers. The latter group might not have been available, but at least for some children, their families filled in the gaps, especially for those that did not thrive in a traditional school environment.

You open an app and start scrolling, then suddenly it’s an hour later. Sound familiar?
The Present

An interactive “globe of notability” shows the curious correspondences and the strange landscape of global fame.
Neuropsych

The “Mind After Midnight” hypothesis aims to explain why night owls tend to suffer more negative health outcomes.
Up Next
The Future

The EmDrive turns out to be the “um…” drive after all, as a new study dubs any previous encouraging EmDrive results “false positives.”