In the year when the Swedish word “flygskam” (flight-shaming) hit the news in Europe, public concern about carbon emissions from aviation is endangering the sector’s social license to operate.

Aviation is a critical sector that connects travelers and businesses across the globe, fosters economic growth and supports humanitarian missions. It is therefore important for the sector, in collaboration with all those who depend on it, to continue to do all it can to lead the way towards sustainable operations. With demand for flights projected to double over the next 15-20 years, 2019 could be the year that the industry, or at least the most progressive actors within it, define a pathway towards net-zero flying.

Over the last decade, the aviation sector has made progress in improving fuel efficiency through improved aircraft design and operations. The International Civil Aviation Organization (ICAO) achieved an important milestone to limit emissions growth with the Carbon Offsetting and Reduction Scheme for International Aviation (CORSIA), a globally agreed market-based measure to achieve carbon-neutral growth for international aviation from 2020.

Alongside these achievements, more options exist when it comes to managing aviation’s carbon footprint. While electric planes – which could run at half the cost and noise of conventional aircraft – are a very real medium-term possibility for smaller aircraft on short routes, they’re likely not an option for widespread adoption on larger or long-haul flights due to low energy density of current battery technology.

Hybrid propulsion, whereby electric motors would provide initial thrust on take-off and landing for example, could on the other hand reduce emissions in medium- and long-haul flying, but this also will take years to make a substantial impact. This leaves sustainable aviation fuels, or SAF, as the most realistic option today for greener flying. SAF could come in various types of sustainable bio-fuels (derived from waste and not in competition with any food crops) that are in use already today. Synthetic fuels are another potential source, capturing CO2 during their production phase. SAF – which can reduce the carbon footprint of aviation fuel by up to 80% over their full life cycle – started testing on commercial-sized aircraft systems in 2008. As well as being cleaner than kerosene, another benefit of SAF is that they can be blended with conventional jet fuel, allowing for a gradual introduction into supply chains without the need for any expensive engine adaptation.

Air travel is centered around hubs.The fact that the 20 busiest airports in the world handle nearly one-fifth of all air passenger traffic should make it a lot easier for SAF to be adopted en masse by airlines. Yet, seven years after their introduction to commercial flights, they still account for less than 0.1% of total aviation fuel consumption, with airlines struggling to break away from fossil fuels.

SAF will only be in a position to compete effectively with petroleum-based fuels when they can be produced in sufficient quantities. Overcoming this impasse requires a new form of collaboration between different stakeholders across the industry – including airlines, airport operators, aircraft manufacturers, energy companies, financial institutions, government, civil society groups and customers. We believe this is now beginning to change. As it does, there are three instruments that can help drive the process.

One of the most chronic challenges facing sustainability efforts in almost any industry is reaching a consensus among the key players on who bears the inevitable costs. This is usually characterized by a “chicken and egg” scenario whereby producers and consumers are both either unwilling or unable to make the initial investment for new technologies to reach a scale where they are competitive with existing fossil fuel-derived options.

One idea that was discussed at a workshop organized by the World Economic Forum on the side-lines of this year’s Paris Air Show suggests this impasse could soon be overcome. Bringing together all the key stakeholders, the suggestion was made that if significant number of large businesses that rely on air travel clubbed together, their collective demand for carbon-neutral travel could catalyse the ramping up of production of SAF. For example, the annual carbon offset budget of one international professional services firm alone could fund up to two new plants for production of SAF. In essence, this would provide in-sector offsets versus out-of-sector offsets such as planting trees, and still earn participating organizations the relevant carbon credits. This idea is not new. Several programmes for redirecting such climate investments currently exist, but there is potential now for forming a larger coalition of corporate actors who want to demonstrate their commitment to climate change and ensure their staff can continue flying at a relatively low cost. 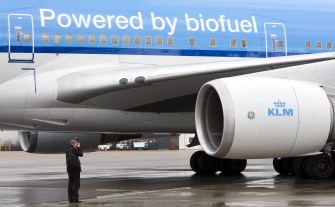 The KLM airplane which runs on biokerose, a type of biofuel.

2. Finance takes to the skies

Such funding from corporate actors, or a collection of willing enterprises, could also be accumulated in a new type of investment fund, not unlike the Oil and Gas Climate Initiative. Through co-investment, the high risks associated with new refineries and related infrastructure can be lowered, and there can be greater confidence the SAF will be used once produced (referred to as “off-take agreements” in the industry). The more plants that are built, the cheaper the production process and fuel product becomes. The resulting SAF from new refineries may only be used several years after the initial investment, but the capital pooled in the investment fund could provide the initial push necessary to get the industry to 2% (or even higher) use of SAF by 2025. As was shown in the case of solar energy, this would be an important benchmark that raises the prospect for reaching price parity with conventional fuel and achieving a complete energy transition of the industry over the longer term.

Financial institutions could play a direct role themselves. The World Economic Forum’s community of CEO Climate Leaders has made great strides in reducing the carbon footprints of their businesses in order to help meet the Paris Climate Goals. Some of the CEOs represent banks that have taken active steps towards ceasing to provide funding for coal-fired power stations and other heavily polluting assets. More recently, stakeholders in the shipping industry have launched the Poseidon Principles, which sees 11 major banks commit to lending portfolios and practices that incentivise the transition to a decarbonised shipping industry. A similar approach in the airline industry could result in beneficial financing terms for operators that commit to progressive adoption of SAF.

If buyers’ clubs have the potential to provide significant momentum through a demand-led approach, opportunities exist for supply-led stimulation as well. One option is for airport operators, in collaboration with their carriers, to make landing rights and lowered associated fees an incentive for driving sustainability. Airports faced with the need to expand in order to accommodate growing demand are under huge pressure to limit their environmental footprint or undertake net-zero growth. The beauty of blended biofuels means that airports could gradually ramp up the percentage of SAF provided to airlines, raising it slowly as global supply increases. That percentage could increase to double digits by the 2030s.

In addition, smart regulatory choices designed to make production and sale of SAF more attractive could help level the playing field with traditional petroleum-based fuels. In emerging economies, like India and Brazil, where there is an abundance of appropriate feed stocks, inexpensive solar and wind resources or land available for refineries, such incentives could serve to encourage investment into new supply chains and scale SAF production in the near to medium term.

The well-sequenced combination of nuanced demand- and supply-led innovations, alongside the emergence of new or improved technologies, presents the aviation industry with a much-needed opportunity to protect its social license to operate and grow in an age of increased awareness around carbon emissions. There is no time to lose.

Icebergs aren’t just a threat to unsinkable ships. Their ability to cause underwater landslides poses a danger to coastal cities.
The Future

This company uses thousands of mirrors, AI, and machine learning to unlock the power of the sun.
▸
9 min
—
with
Big Think
The Past

Trees store carbon dioxide, have a cooling effect in cities, and reduce flood risks.
Up Next
Health

“We can’t allow people to get sick,” President Donald Trump said from the Oval Office.