Americans are split over Canada’s single-payer healthcare system. Some see it as a model to be adopted by the United States. Others see it as an inefficient system that will hinder America’s competitive edge. Proponents of either side can, of course, regale you with stories of former neighbors, distant cousins, or one-time coworkers who fled across the border to seek that elusively greener healthcare on the other side.

In truth, each system has its flaws. Canada’s healthcare is universal, assuming you ignore the gaping oversight of not covering essential prescriptions; meanwhile, the U.S. has some of the best healthcare in the world, if you don’t mind bankrolling a litany of unnecessary tests and treatments.

But Canada dominates its southern neighbor in one healthcare facet: cost savings. Despite publicly funding universal healthcare, Canada spent only 10.45 percent of its national GDP in 2014. The United State’s expenditure was 17.4 percent of GDP. Per capita, Canada spent $4,641. The U.S.? Double that.

How does Canada do so much more with less? 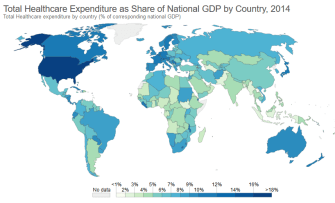 In 2014, Canada spent 10.45 percent of its national GDP on healthcare. The United State’s expenditure was 17.4 percent.

(Photo from Our World in Data)

According to a report published in the Journal of the American Medical Association, the reason the U.S. outspends Canada — and 10 other high-income countries —is not due to social spending or healthcare utilization. The culprit was price inflation across the board.

Administrative costs were also singled out as a major price driver. According to the report, U.S. administration accounted for 8 percent of healthcare expenditures. In other high-income countries, that amount ranged from 1 to 3 percent.

“We have this discombobulated, fragmented system that leads us to have very high administrative costs, and everything is disconnected,” said Dan Polsky, executive director of the University of Pennsylvania’s Leonard Davis Institute of Health Economics. “You have to go from one system to another when you go from one provider to another. Some health [information] gets lost with the transfer from one provider to the next. And there’s a private healthcare system that funds you when you are under 65, and when you’re over 65, you get funded by Medicare.”

A simplified overview of the U.S. healthcare system shows it comprises Medicaid, Medicare, Tricare, the Veteran’s Health Administration, and a panoply of private health plans.

Further adding to the discombobulation, many Americans manage coverage through a patchwork of policies. A senior citizen, for example, may be on Medicare (a government-run program) but augment her coverage with a Medigap policy (insurance provided by a private company specifically to offset Medicare costs).

Meanwhile, the Great White North is currently debating whether to extend universal healthcare to encompass prescriptions. A report published in the Canadian Medical Association Journal, titled “How to pay for national insurance,” found that implementing such a plan in 2020 would require $9.7 billion in new public funding.

The benefits? In addition to providing universal access to pharmaceuticals, national pharmacare would save the private sector $13.9 billion, a net savings of $4.2 billion.

The CMAJ report found that “[a]ccess to medicine is best facilitated when direct charges to patients are limited” and “[c]ost control is best achieved by single-payer systems that reduce administration costs and consolidate purchasing power.” 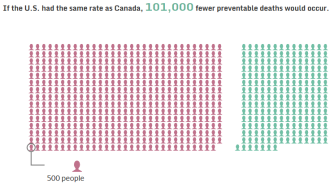 If the U.S. adopted Canada’s healthcare approach, it could save as many as 101,000 lives from preventable deaths.

(Image from the Commonwealth Fund)

The United States’ unprecedented spending would be worthwhile if it could produce results above and beyond those of Canada and other high-income countries. Sadly, the data suggests the opposite is true.

As noted in the JAMA report, the U.S. system covers less of its population — 90 percent compared to the 99–100 percent range of its peers. Americans go to the doctor less often and spend fewer recover days in the hospital.

The consequences of these differences are stark. Canadian citizens sport a higher life expectancy (82.21 years compared with 79.24 in the U.S.). The country’s maternal mortality rate is also significantly lower. Only 27 pregnant women died in Canada in 2015, compared with 550 in the U.S. In fact, the United States’ maternal mortality rate is the worst in the developed world.

As for those infamous Canadian wait times, they do exist but their effect on the Canadian healthcare system has been greatly exaggerated. They are mostly applied to elective procedures as a means of reducing cost.

As such, adopting Canada’s healthcare approach would save the U.S. more than money. The aforementioned Commonwealth Fund report noted that the U.S. would avoid 101,000 fewer preventable deaths, 4,800 fewer infant deaths, and 42 million fewer American adults neglecting care because of costs.

How is it that the U.S. system outspends so many other high-income countries, yet produces far less salubrious outcomes? The answer is an unequal distribution of healthcare, with spending being concentrated at the socio-economic top.

In the United States, the top 1 percent of spenders account for more than 20 percent of total healthcare expenditures. The spending of the top 5 percent accounts for almost half.

According to Esteban Oritz-Ospina and Max Roser, inequality in healthcare spending is to be expected — the elderly and individuals with complicated health conditions will always require larger expenditures. However, the discrepancy of spending in the data suggests to them that the United States suffers from an “inequality of access over and above inequality in need.”

In contrast, Canada uses cost control to curb administration costs, allowing the country to cast a wider healthcare safety net that extends from the top to the bottom.

In sum, Canada’s healthcare system isn’t without its flaws, but we shouldn’t make the best the enemy of the good. If the United States would learn from Canada’s example, it could do a lot of good — and save some money in the process.

Tags
economicsgovernmenthealth careInequalitypharmaceuticalspoliticspublic healthsocietyunited states
In this article
economicsgovernmenthealth careInequalitypharmaceuticalspoliticspublic healthsocietyunited states
Related
The mind-blowing stats on male inequality
Male inequality — the enormous cultural shift happening right under our nose.
▸
15 min
—
with
Richard Reeves
The Past
How people crossed the Atlantic Ocean before commercial aviation
For centuries, the only way to travel between the Old and New World was through ships like the RMS Lusitania. Experiences varied wildly depending on your income.
The Past
How the crusades spawned the world’s first financial services company
The Knights Templar were not only skilled fighters, but also clever bankers who played a crucial role in the development of Europe’s financial systems.
Health
Food expiration dates don’t have much science behind them
A food safety researcher explains another way to know what’s too old to eat.
The Present
Five key findings from the 2022 UN Population Prospects
Explore the key highlights from the UN’s latest release of its world population estimates.
Up Next
Hard Science
New arthritis treatment uses nanoparticles to take drugs directly into cartilage
The particles are able to travel deep into tissue in ways that other treatments simply can’t.