A great many human inventions are inspired by nature. Velcro, for instance, was inspired by the hooked barbs of thistle, sonar was inspired by bats and dolphins, and flight was, of course, inspired by birds. To solve climate change, arguably the world’s most pressing challenge, we’ve once again turned to nature for solutions.

That’s why researchers have been working on building devices modeled on plant life’s ability to photosynthesize CO2 and water and, using sunlight as an energy source, transform these molecules into carbohydrates and oxygen.

The field of artificial photosynthesis has long looked into how best to implement and adapt this process for our own needs. Now, recent research has uncovered a cheap and efficient means of photosynthesizing useful fuel out of waste CO2 and water. 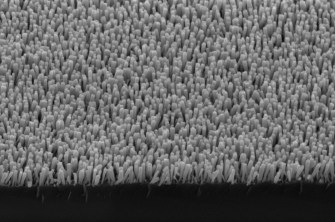 An electron microscope image shows the semiconductor nanowires. These deliver electrons to metal nanoparticles, which turn carbon dioxide and water into methane.

The new method, described in Proceedings of the National Academy of Sciences, uses solar power to produce methane, which can be used as natural gas.

In the context of climate change, many environmentalists are probably groaning over the idea that the production and burning of yet more greenhouse gases should be portrayed as a good thing, but it’s important to remember the practical benefits of devices such as this. Attached to the smokestacks of power plants, this artificial photosynthesis device can capture CO2 that would otherwise pollute the atmosphere and transform it into a far more efficient fuel that remains carbon neutral — so-called “green” methane.

Since our current infrastructure already supports the use of hydrocarbons for fuel, implementing tools such as these is an important first step to transitioning towards a more advanced but as-of-yet incomplete renewable energy infrastructure.

“Thirty percent of the energy in the U.S. comes from natural gas,” said co-author Zetian Mi in a statement. “If we can generate green methane, it’s a big deal.”

Most importantly, the device makes use of low-cost and easily manufactured components, meaning that it will be scalable. The fatal flaw of many magic bullet climate change solutions is that they are expensive or difficult to make and implement, preventing them from being used at the scale necessary to combat climate change.

The device itself can be characterized as a solar panel studded with nanoparticles of iron and copper. The copper and iron nanoparticles hang onto molecules of CO2 and H2O by their carbon and hydrogen atoms. Using the sun’s energy or an electrical current, the bonds between atoms in the CO2 and H2O are broken down, enabling the water’s hydrogen atoms to connect to the carbon dioxide’s carbon atom. The end result is one carbon atom bonded with four hydrogen atoms — methane. What’s more, the new device does this work far more efficiently than other artificial photosynthesis systems.

“Previous artificial photosynthesis devices often operate at a small fraction of the maximum current density of a silicon device, whereas here we operate at 80 or 90 percent of the theoretical maximum using industry-ready materials and earth abundant catalysts,” said Baowen Zhou, a postdoctoral researcher on this project.

Methane is merely one of the more useful products this device can produce; it can also be configured to produce syngas — a fuel consisting of hydrogen, carbon monoxide, and some carbon dioxide — or formic acid, which is used as a preservative in livestock feed.

A bridge too far?

The use of natural gas is on the rise in the U.S., but not everybody sees this as a positive. It’s a cleaner fuel than coal, for instance, or diesel. It’s been characterized as a bridge fuel that economies can lean on while waiting for the renewable energy sector to mature. Then again, its advantages make it awfully attractive, so much so that critics claim we may pay too much attention to it when we ought to be pivoting to renewable energy in a more focused fashion.

Nearly everyone (except for certain politicians and industry leaders) are on the same page regarding the ultimate fate of the world’s energy sources — renewable energy like solar and wind power are going to be the main way we generate power in the future. In the meantime, however, the next-best thing is to implement CO2-scrubbing technology like the artificial photosynthesis device described in this article. Burning natural gas that we’ve sucked out of the Earth will certainly trash the atmosphere, but converting existing emissions into carbon-neutral fuels is far more practical, regardless of whether natural gas should be considered a bridge fuel or a barrier.

To preserve biodiversity and ecosystems, protected areas should be connected into a gigantic World Park.
Hard Science

This everyday electrical phenomenon had no widely accepted scientific explanation — perhaps, until now.
The Present

The Seychelles magpie-robin is up for sale – yes, for sale – as a digital nature collectible.
Up Next
The Present

As little as an extra dollar could mean a significant decrease in suicide rates.