Democratic presidential candidate Andrew Yang likes to joke that Americans are ready for “an Asian man who likes math.” While the math underlying his call for universal basic income has been scrutinized, his trumpet blares regarding the dangers of automation are not receiving nearly the attention they should be.

At least part of the reason is the continual drowning out of all serious issues due to racial profiling (or whatever other target the president invents that day). On the debate stage, Yang stated that immigrants are being scapegoated for reasons separate from economic issues. Though obvious to most, politics around racism has always relied on linguistic feats, as if “go back to your country” could be anything other than blatant bigotry.

Yang intimately knows of what he speaks. His immigrant parents traveled from Taiwan to Berkeley to attain impressive degrees: his father a Ph.D. in physics, his mother a master’s in statistics. Yang put this into perspective:

“My father immigrated here as a graduate student and generated over 65 U.S. patents for G.E. and IBM. I think that’s a pretty good deal for the United States. That’s the immigration story we need to be telling. We can’t always be focusing on some of the distressed stories.”

As an entrepreneur, the Brown and Columbia graduate founded Venture for America, which focuses on creating jobs in depressed American cities. Yang left in 2017 after growing the company to twenty cities with a $6 million operating budget. He has since focused on warning anyone who will listen about the dangers of automation to our work force. Fortunately, he has landed on one of the biggest platforms to do so.

To put that into perspective, immigrant-founded companies contribute more financial might than the economies of Japan, Germany, or the UK. The only nations that surpass such a GDP are America and China.

Broken down by state, New York houses 35 of these companies, generating nearly a billion dollars while employing nearly two million people. California comes in second with 29 businesses. Rounding out the top list is Illinois (21), Texas (18), Virginia (12), and Florida and New Jersey, which boast 10 each.

As the report notes, the creation of major businesses is only one aspect of immigrant contribution to America. Small- and medium-sized businesses matter too. In fact, immigrants are more likely to be entrepreneurs than U.S.-born residents.

“Medium and small businesses are also vital to the U.S. economy, employing many more millions at neighborhood stores, restaurants, professional services, and other local businesses. Immigrants have a significant role to play here, with nearly 3.2 million immigrants running their own businesses.” 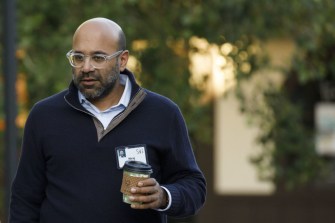 Niraj Shah, co-founder and chief executive officer of Wayfair Inc. (and son of immigrants from India), arrives for the morning session of the Allen & Co. Media and Technology Conference in Sun Valley, Idaho.

Last year, PBS took four economic myths about immigrants to task, showing that well beyond racist political rhetoric, “immigration has an overall positive impact on the long-run economic growth in the U.S.”

As a motive for the recent mass shooting in El Paso becomes clear, racial tensions around the country are escalating. The terrorist’s reasoning for murdering twenty people (and injuring many more) was to preserve a sustainable life by “getting rid of enough people,” which, as the data show, is the opposite of reality. His screed is based on unadulterated racism and white supremacy, not economics or math.

Humans are influential animals; we are also easily influenced. As in companies, societal attitudes are condoned or criticized from the top down. Racial animosity spewed on Twitter creates the conditions for further attacks and hatred, the opposite of what makes America great in the first place.

It is unlikely that Andrew Yang will be our next president, but his voice in these debates is needed. His singular focus on the dangers of automation addresses a forthcoming reality we will all soon face; his good-natured joking about Asians and math underlies an important discussion on race and immigration we need to have. And it’s true: the math is on his side. If only the rest of us would take the time out for simple addition, we’d understand that.

Bitcoin’s creator owns five percent of the entire Bitcoin supply, meaning that he has a larger percent of Bitcoin than the U.S. has of gold.
Up Next
The Present

A new survey suggests that free money isn’t as popular as you’d suppose.