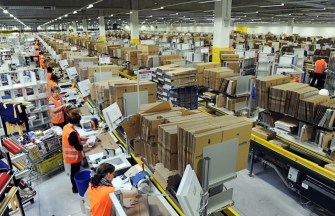 Workers in an Amazon warehouse.

Net positive, or not so much?

Following the announcement earlier this week of Amazon increasing wages to $15/hr., the company today told its warehouse workers that production bonuses and stock awards are no longer on the table.

“The significant increase in hourly cash wages more than compensates for the phase out of incentive pay and [restrictive stock units],” Amazon’s spokesperson said in an emailed statement to CNBC. “We can confirm that all hourly Operations and Customer Service employees will see an increase in their total compensation as a result of this announcement. In addition, because it’s no longer incentive-based, the compensation will be more immediate and predictable.”

The net effect will be a reduction for some, especially those who have been with the company the longest; warehouse workers had received effectively one share every year after having been with the company for a number of years. That would currently be worth nearly $2,000, and they received an additional extra share every five years as well. Also, production bonuses added up to as much as $3,000 a year for some.

Based on a 40-hour workweek, that’s a net loss of $2.40/hr. for those who were able to receive both of those bonuses. In other words, for those already making over $12.50/hr. plus stock and production bonuses, it takes money away.

The news comes on the heels of praise from all over the place for the initial wage increase, including Senator Bernie Sanders, a long time critic of companies with employees forced to receive welfare and Medicaid because of such low wages. 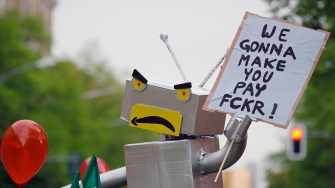 Amazon’s “stealth tax” on its workers

At a time when CEO Jeff Bezos makes more every minute—nearly $30,000—than many Amazon employees do in total, it’s an interesting move, and one that might test the loyalty of some long-time employees.

Reactions were swift. In the U.S., the United Food and Commercial Workers’ union (UFCW) asks the question:

Was the pay raise just a PR stunt? “Tucked away in the announcement was the fact that #Amazon will phase out its bonus and stock award programs for its hourly workers.” @CNNhttps://t.co/00OFUPpjDo
— UFCW (@UFCW) October 4, 2018

And in a Tweet from the 700,000-strong GMB union in Great Britain, which seeks to represent more Amazon workers, Amazon’s action was blasted as a “stealth tax”:

When Amazon announced their wage increases yesterday they said nothing about cutting staff benefits.

So, what say you? Is this a “Robbing Peter to pay Paul” move after a much-awaited pay raise, or is it a legitimate business decision based on dollars and sense?

Or something else entirely?

Dear Jeff Bezos: What are you going to do with all that …

Our brains did not evolve to shop on Amazon.
Up Next
High Culture

A California-based company called PIX will soon release a backpack that can display animations and play games, offering a glimpse into the potential future of wearable technology. PIX, which started […]