Most likely, you don’t need to be convinced in the utility of perseverance – the ability to stick to a boring task, despite the fact that the Facebook tab is blinking with notifications in your browser. Implementing tactics that help us resist distractions in order to work towards long-term goals is crucial for success. Now, researchers have found an interesting strategy that has been proven to work for kids – imagining they’re Batman. The study was published in the journal Child Development.

With the onset of early childhood and attending preschool, increased demands are placed on the self-regulatory skills of kids. Children need to start completing tasks that may be much less interesting than the myriad of entertaining distractions around them. Researchers have been interested in how to develop self-control and perseverance in children by teaching them tactics like averting their attention away from distractions.

Another strategy they have found effective is called “self-distancing”— the ability to look at your own situation from an outsider’s perspective. Doing this helps people distance themselves from their current feelings and the particular distractions of the moment and instead reflect on the situation more objectively, with the long-term goal in a sharper focus. In a more scientific language, this sounds like “transitioning from stimulus control to volitional control of one’s thoughts and behaviors” and is what we need to be able to self-regulate successfully.

This same tactic appears to work for kids as well. In an interesting experiment, researchers found that when kids (ages 4 and 6) are asked to imagine they are Batman (or another exemplary character) they perform markedly better on a test designed to measure their perseverance.

The researchers simulated a typical grown-up dilemma: choosing between working on something that is beneficial in the long-run but tedious in the moment (completing a boring task on a computer but being a “good helper”) or giving in to immediate gratification in the form of playing a game on an iPad.

As expected, the older kids persevered longer on the work task than the younger kids as they’ve had more time to develop self-control. However, the extent to which the children were self-distanced affected their performance regardless of age, with the kids in the Batman group spending the most time on the tedious task. 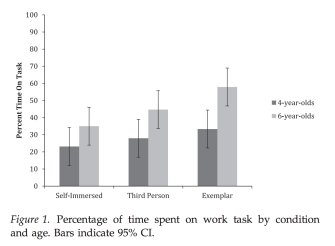 In addition to the self-distancing theory, the researchers suggest several other potential reasons why this tactic works for kids. One is that the kids were able to identify with powerful features of the impersonated character and the other is that role-playing in general is considered a fun and familiar activity at this age.

The researchers conclude that:

Perseverance can pave the pathway to success. The current research suggests that perseverance can be taught through role play, a skill that is accessible to even very young children.

So, who is ready for a role-playing day at work?

Tags
ADHDboredomchildrenhumanskidsself-distancingworkflow
In this article
ADHDboredomchildrenhumanskidsself-distancingworkflow
Related
Thinking
Gray zone: when is it best not to save a life?
Medical science can save lives, but should it do so at the cost of quality of life?
The Present
Marriage lotteries and a bachelors’ tax: The strange past of fighting declining birthrates
Birthrates are cyclical and have gone up and down throughout history.
Neuropsych
Study: ADHD is overdiagnosed and overtreated
Like autism, ADHD lies on a spectrum, and some children should not be treated.
Neuropsych
Why kids take board games so seriously
How morally developed are you?
The Past
The birth of childhood: A brief history of the European child
Did the 20th century bring a breakthrough in how children are treated?
Up Next
Surprising Science
U.S. Spent $5.6 Trillion on Wars Since 9/11, More Than Three Times What Pentagon Estimates
A new report shows that the true costs of war are much higher than reported by the Pentagon.