Next month, Boeing plans to cease production of their 737 Max planes, which have been under review by the Federal Aviation Administration (FAA) after two of the planes crashed, killing 346 people.

The two crashes occurred in October of 2018 and March of 2019 as a result of a late-addition automated system called the Maneuvering Characteristics Augmentation System, or MCAS. In essence, MCAS would automatically nudge the plane’s nose downwards under specific circumstances. The device was approved by the FAA; however, Boeing made some design changes after the approval without consulting the FAA again.

The changes were made to improve MCAS’s response during low-speed stalls, but this meant that the system now only relied on data from one sensor. If this sensor were defective, it could trigger a catastrophic nosedive just after take-off. This is exactly what happened during the two plane crashes in October and March.

Worse, Boeing opted to remove reference to MCAS in pilot manuals and forego training pilots on the system in an effort to save money on training. Doing otherwise may have required millions of dollars, potentially increasing the competitive pressure from the other major airline company, Airbus.

Since then, the FAA has grounded the plane and is reviewing it prior to its recertification. However, FAA officials have made it clear that this recertification would take place at the earliest in 2020.

With the time it would take to review all of the plane’s systems, revise any issues, refurbish the 400 grounded planes, and retrain thousands of 737 pilots on top of numerous delays in the recertification process, Boeing opted to suspend production, hoping to deliver planes already in storage with little backlog after the 737 is recertified.

“We know that the process of approving the 737 Max’s return to service, and of determining appropriate training requirements, must be extraordinarily thorough and robust, to ensure that our regulators, customers, and the flying public have confidence in the 737 Max updates,” Boeing said in a statement.

As a result of the production halt, some 12,000 workers in the 737 manufacturing facility in Renton, Washington, will be temporarily reassigned. Boeing has insisted that these workers will not be laid off or furloughed. 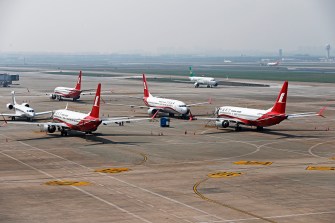 Altogether, this doesn’t paint a rosy future for Boeing. Without being able to deliver its planes, Boeing has not yet made any revenue from them. Additionally, the airline company will be on the hook for billions of dollars to its airline customers as compensation for the cost of the grounding, it’s been involved in various lawsuits whose associated costs have not been disclosed to shareholders, and it’s promised to set aside a $100 million fund to help the families of the crash victims.

On top of this, numerous concerns have been raised about the quality of one of Boeing’s other major airliners, the 787 Dreamliner. Airlines have made several private complaints to Boeing about the 787’s quality control procedures as being “way below acceptable standards.”

A former quality control manager at the plant in Charleston, South Carolina, where the 787 is manufactured claimed that management “just wanted to get the planes pushed out the door and make the cash register ring.” In an interview, he cited non-working oxygen masks, metal slivers rattling about the compartment where the plane’s avionics ran, and a pervasive culture of speed over quality at his plant.

The airline industry is notoriously challenging, and despite some of their failings, it continues to be dominated by just two companies: Boeing and Airbus. The massive upfront costs to entering the airline industry means that few other competitors are likely to arise.

In its fierce competition with Airbus, critics have claimed that Boeing has begun to cut more and more corners in pursuit of faster profits. The deadly and expensive crashes of the 737 and complaints regarding the 787 demonstrate the weakness of this strategy — yet the entrenched positions of both major airline companies mean that there may be little consequence for Boeing. No smaller airliner can compete with them, both companies have significant cash reserves, and it would take years for an airline to switch from Boeing to Airbus due to backlogged orders. Despite the crashes, complaints, and production halt, Boeing may emerge from this rocky year only a little worse for wear.

Paradoxically, we lose wars because the world is peaceful and the U.S. is powerful.
Strange Maps

In Louisiana, high school starts at 7:30 am. Research shows that is at least an hour too early.
Up Next
The Present

How to tell if your digital addiction is ruining your life

Consider the 2,600 times we touch our phones every day.