We look to history to figure out if the past is either a prologue or a lesson to the present. In terms of political history, the comparison between the United States and the Roman Empire is attractive because not only do these two represent the most powerful nations of their time, the U.S. actually modeled some of its institutions and thinking after the Roman example. The recent political strife plaguing the U.S. seems to be getting worse by the day and invites the question whether America, like its ancient predecessor, is headed for a downfall. Certainly, from the historical perspective, no empire has lasted forever (so far) and the U.S. is due for a challenge.

The Roman Empire was one of the most successful political and social entities in human history, lasting for over 500 years, from31 BC to 476 CE. At the height of its power, the empire extended over 5 million square kilometers, controlling around 70 million people, about 21% of the world’s population at the time. Like the U.S., the Roman Empire spread its influence around the world through its culture, languages, religion, philosophy, laws and technology.

But while the U.S. is the world’s only current superpower, pronouncements of its Rome-like fall are greatly exaggerated and not entirely appropriate. Here’s why:

1. Political Instability Is Here but the U.S. Is Still a Republic

The period we know as the time of the Roman Empire actually followed another nearly 500-year block when it was the democratic Roman Republic (509 BC – 27 BC). A period of unrest and civil wars precipitated the transition to the empire. This is when the infamous assassination of Julius Caesar took place in 44 BCE. After a power struggle that followed Caesar’s demise, Augustus (Caesar’s nephew) was crowned as Rome’s first emperor. More or less effective emperors followed, with much internal intrigue and corruption that led to coups and assassinations. The infamous Caligula (12-41 AD) was killed by the Praetorian Guard, while the corrupt and mad Nero (37-68 AD) committed suicide.

The U.S. is certainly undergoing a period of political upheaval, with the country often split on major issues and animosity rising between different sides. The election of Donald Trump both increased the divide and is a symptom of it. Still, the U.S. is a democratic society, with checks and balances, and Trump is no emperor.

It is also not the first time in recent history the country dealt with divisive issues, with the civil rights struggle and Vietnam War being quite contemporary events (especially from a historical perspective). The country has survived more turmoil, and barring unprecedented measures from the new administration and ineffectiveness of other branches of the government, the U.S. is poised to continue with its political system relatively healthy and functioning. 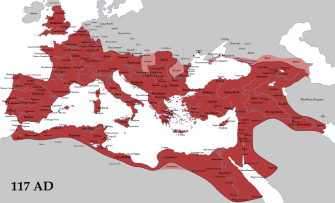 The Roman Empire in 117 AD during the reign of emperor Trajan. Credit: Tataryn

2. The Economy Needs Work but Is in No Danger of Collapse

Rome was engaged in regular wars and constantly overspent to keep protecting the borders of its huge empire. But eventually the expansion slowed due to stronger opponents and even pirates like Vandals operating in North Africa. This dwindled the supply of cheap slave labor and additional taxes. Roman rich also worked just as hard back in their time to pay less taxes, creating an increasing gap between the wealthy and the poor. Historians also point to a trade imbalance that eventually grew between Rome and China and India. These factors led to a slowing economy and a decline in Roman power.

The U.S. economy is not dependent on colonies or slave labor, but the rising inequality between the rich and the poor, and the resulting political repercussions and unrest are certainly here to stay. The emergence of Donald Trump, who capitalized politically on the job losses in the manufacturing industry and fear of job-taking immigrants, as well as the need for foreign trade reform, points to just how much Americans are worried about the future of their country’s economy.

Still, despite Trump’s rhetoric, the unemployment is low and the country’s steady, if unimpressive, annual GDP growth rate of about 2% point to the fact that the economy is not in such shambles as to predict an imminent collapse. The military spending in the U.S. has been hovering around 3-4% of the GDP, a sizable but not unusual amount, comparable to other world powers.

3. The Military Situation Is Vastly Different

After fighting off all challengers for centuries, Rome’s military power waned and it was finally overtaken by a series of military losses to Germanic tribes, including the sacking of Rome in 410 by the Visigoth King Alaric, and another sacking by the Visigoths led by Geiseric in 455. In 476, the Germanic warrior Odoacer led a revolt from within that deposed the Emperor Romulus Augustulus, making him the last Roman emperor to rule Italy from Rome. The Eastern part of the Empire actually survived until 1453 CE, when Constantinople fell to the Ottoman Turks.

The U.S. has powerful military opponents like Russia and China, but an all-out conflict involving any of the nuclear powers seems highly unlikely due to mutually assured destruction. However, asymmetrical warfare like terror attacks by Islamic fundamentalists or cyberattacks and subterfuge from Russia can cause more gradual decline in American power due to weakening confidence in its leaders and institutions. Still, this is not likely to result in a serious military loss unless a more direct confrontation takes place, which at this point seems impossible. So the world’s most powerful military should keep America intact for the time being. 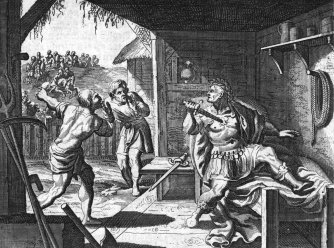 The Emperor Nero commits suicide with his own sword after the Roman army overruns the city, 9th June 68 AD. (Photo by Hulton Archive/Getty Images)

4. U.S. Is Not in a Cultural and Social Decline

This point is certainly debatable as some would argue the U.S. is undergoing a weakening of its values. The country is transforming from a Christian and white-majority nation into an ever-more multicultural melting pot. Interestingly, some like the historian Edward Gibbon, in his seminal “The History of the Decline and Fall of the Roman Empire,” have pointed to the adoption of Christianity and its weakening of traditional Roman values as the reason for the empire’s eventual collapse.

Others have blamed the overspending and dumbing down of Rome via gladiator games and debauchery via crazed emperors like Nero for its decline. This, of course, makes an easy parallel to America’s preoccupation with sports and reality tv stars, with the left painting Trump as a latter-day Nero. On the other hand, it can easily be argued that these types of entertainments and politics are nothing new historically and can be found in any century. As if they didn’t have Kardashian-type subjects of everyone’s gossip in Renaissance-era Florence of the ruthless Medicis and the Borgias.

While the U.S. is undergoing transformation, with social changes like the adoption of gay rights, and rapid technological changes via the internet and automation, there’s little reason to point to some kind of major worsening of society. It’s more likely that it’s changing and adapting appropriately, in step with the rest of the Western civilization.

5. Technology, Not Politics Will Transform the U.S. (And the World)

With so much attention focused on the political strife, the lasting changes to America and its power are not likely to come from invading barbarian hordes. The coming world of complete automation, major life-extending medical advances and space exploration will transform the U.S. in ways the Roman Empire never experienced. The Romans did employ and advance the technology of the day but their life was not upended because all the jobs were suddenly staffed by robots, something likely to happen within this century.

How technology changes America and the political entities around the world will not be clear until the singularity hits. Perhaps the battle by President Trump and his ideologues against “globalism” which has a strong anti-intellectual and anti-technology component, is a last ditch effort to fight back against what is really a war that’s already lost.

Still, the political is not to be discounted. As this passage from Gibbon’s “The History of the Decline and Fall of the Roman Empire” shows, we have reason to look at Roman history for warnings:

“The provinces, long oppressed by the ministers of the republic, sighed for the government of a single person, who would be the master, not the accomplice, of those petty tyrants. The people of Rome, viewing, with a secret pleasure, [Augustus’] humiliation of the aristocracy, demanded only bread and public shows; and were supplied with both by the liberal hand of Augustus. The rich and polite Italians, who had almost universally embraced the philosophy of Epicurus, enjoyed the present blessings of ease and tranquility, and suffered not the pleasing dream to be interrupted by the memory of their old tumultuous freedom.”

Pax Romana, the period of relative peace at the height of Roman power lasted about 200 years. We are over 70 years into Pax Americana (from the end of WW II).  How long we can make it last is still up to us.

Tags
americacollapsedeclineDonald TrumpEdward Gibbonsfallfuturefuturismhistoryroman empirerussiatechnologyunited states
In this article
americacollapsedeclineDonald TrumpEdward Gibbonsfallfuturefuturismhistoryroman empirerussiatechnologyunited states
Related
High Culture
Why are flood myths so common in stories from ancient cultures around the world?
Could the prevalence of flood myths around the world tell us something about early human migration or even the way our brains work?
The Past
The Wild West was lawless and chaotic — and the police helped keep it that way
Lawmen and outlaws were often the same people.
Thinking
6 great philosophers and how they used their political power
Most philosophers merely contemplate the world, but what about the ones who actually tried to change it?
The Past
Ancient migration: Bering Strait land bridge from Asia to North America was not a one-way road
Ancient humans crossed the Bering Strait land bridge from Asia into North America. But some of them went back.
High Culture
Did Paul Cézanne hide an early self-portrait underneath a 160-year-old still life?
To answer that question, we may have to figure out when the famed painter started to go bald.
Up Next
Surprising Science
What Our 1st Nuclear Test Left Behind Is a Lot Like Moon Rocks. Hm.
A study of the zinc left behind at a plutonium blast site shows that it’s identical to what’s in moon rocks, supporting the idea of an explosive lunar origin.