“Treason” is a charged word that’s often used quite lightly in today’s hyperpartisan political atmosphere. Revelations of contacts between officials in the Trump administration and various representatives of the Russian government are raising the specter of treason, certainly in the eyes of many Democrats. Of course, none of the Congressional and FBI investigations have concluded and we don’t really know what happened, other than the reports by the intelligence agencies that Russians hacked the DNC and seemed to favor Trump in how they released information. But could anything that is being alleged actually be treason?

First of all, here’s what the U.S. Code of Law defines as treason:

The U.S. Constitution itself spells it out similarly in Article 3, Section 3:

Treason against the United States, shall consist only in levying War against them, or in adhering to their Enemies, giving them Aid and Comfort. No Person shall be convicted of Treason unless on the Testimony of two Witnesses to the same overt Act, or on Confession in open Court.

The Congress shall have power to declare the Punishment of Treason, but no Attainder of Treason shall work Corruption of Blood, or Forfeiture except during the Life of the Person attainted.

As you can see, the big deal here is levying war against the United States and helping its enemies. Whatever anyone in Trump’s camp could have potentially agreed on with the Russians is highly unlikely to be construed as waging war against the U.S. And as we are not fighting a war with Russia, it’s hard to justify calling it an “enemy”.

There are those who do consider the Russian cyberattacks related to the election an act of war. Russian military doctrine expert Alexander Velez-Green thinks the Russian leaders themselves are seeing things that way, taking advantage of the fact that U.S. policymakers are used to only viewing war as something “limited to the military arena”. Thus the Russians are using non-military efforts (hacking) to “devastating effect”.

What is their goal? According to Velez-Green, it would be “to cripple the United States, shatter NATO, and fill the void left by America’s absence.”

Interestingly, such Republican icons (and known warhawks) as Dick Cheney and John McCain have also publicly come out to say that the cyber attacks could be regarded acts of war.

The fact that there are serious implications to the defense of the U.S. in whatever happened was underscored by the recent resignation of President Trump’s National Security Advisor retired General Michael Flynn. He was forced to give up his post after it was revealed he misled the Trump administration over contact with a Russian ambassador. Subsequently, Flynn’s lawyer offered Flynn’s testimony to Congress in exchange for immunity, which in turn caused many to wonder whether Flynn has something explosive to say. 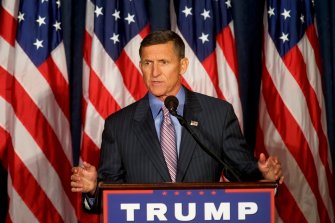 Still, we don’t know if Flynn really has anything transformative to reveal to the investigators. The reality remains that since there is no war there can be no treason.

But some legal minds see another source of trouble.

The Harvard law professor John Shattuck argues that even if Trump and his team didn’t knowingly coordinate the cyberattacks on the DNC with any party, their actions after the intelligence team’s conclusions were made could rise to the level of treason. He says that denying the cyberattacks, which is something Trump continues to do, and working to hamper their investigations is like “giving aid and comfort to an enemy of the United States”.

Another Harvard professor Lawrence Tribe also previously called into question Trump’s statements during the campaign where he seemed to openly advocate for Russia to share Hillary Clinton’s emails.

Who has been convicted of treason in U.S. history? There have been about 30 treason trials in U.S. since 1789. There were people like Mildred Gillars, an American broadcaster, and Robert Best, a journalist, who were convicted after working for the Nazis to push their propaganda during World War II. The last people to be tried and executed for treason were Ethel and Julius Rosenberg, who were convicted of passing U.S. atomic secrets to the Soviet Union in 1953.

One place where it’s not so unusual to see charges of treason? Russia. It charged two intelligence officials and a cybersecurity expert with treason just recently, possibly in response to the U.S. hacking probe. According to the New York Times, the arrested might have been the ones who tipped the American intelligence off to the Russian interference in U.S. elections.

As the investigations into any possible links between the Trump team and the Russian government continue with much partisan rancor, while still remaining under Republican control, it’s hard to imagine scenarios, no matter what happened, where “treason” would be a reasonable word to use. It’s unlikely Democrats can convince enough average Americans that a war with Russia is really underway, while Trump’s Republican base already largely ignores any claims of collusion as partisan distraction. If you’re staunchly pro-Trump, you might want to consider that even such conservative media outlets as the National Revieware not dismissing all the Russia-related claims, agreeing that there are questions to be answered.

A sensible approach to  this investigation needs to figure out a less-sensationalized and divisive underlying target than “treason”. It is also time to update our legislation about what wars can be in the 21st century. We are not likely to see a full-fledged armed conflict between the U.S. and any of the nuclear powers. But an insidious war of misinformation can be just as destructive to our society.

Like Dua Lipa, he had to create new rules.
Up Next
Starts With A Bang

Ask Ethan: Is there any such thing as pure energy?

What would energy without a particle to attach itself to even look like?“It is only through labor and painful effort, by grim energy and resolute courage, that we move on to […]