Piecing together history through archaeology is inherently sketchy. Clues that tell a complete story could be anywhere — so much depends on the artifacts that just happened to have been found. It’s a credit to archaeologists’ knowledge and imagination that they’ve been able to piece together as much about the distant past as they have.

The recent discovery of a nearly complete skeleton from 775–940 CE belonging to a house cat living along Asia’s Silk Road significantly pushes back humanity’s history with domesticated animals. Prior to this find, the domestic Felis catus L. — as opposed to F. l. ornat, the wild steppe feline — according to DNA testing, wasn’t seen in the archaeological record of Central Asia until around the colonial period of the 18th and 19th centuries. While the remains of domesticated dogs are commonly found, cats are not, and certainly not specimens that are sufficiently complete. This allows archaeologists to infer much about the individual animal’s life story. This cat’s story is published in the journal Scientific Reports. 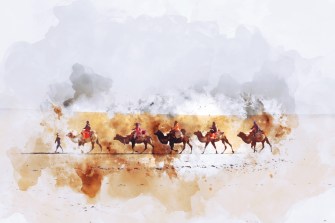 The legendary Silk Road was not, its name notwithstanding, a single road. Rather, it was a network of trade routes running across Asia from China to the Mediterranean. It was at its height between 130 BCE (when it was officially established by China’s Han Dynasty) and 1453, when the Ottoman Empire closed it down.

While the Silk Road’s primary purpose was commercial — the transport of goods across the ancient world — the communities through which it passed were exposed to a rich assortment of distant cultures, and its influence was thus profound. When the Silk Road was shut down, explorers took to the world’s oceans in search of new trade routes that might replace it.

One of the many communities along the trade route was the early medieval settlement of Dzhankent, located in Kazakhstan, east of the Caspian Sea. It was populated primarily by a pastoralist Turkic tribe called the Oghuz. The Oghuz were nomads who controlled Dzhankent and ruled the surrounding region until the 11th century.

The tomcat skeleton was found in Dzhankent, and had apparently been deliberately buried, though there is no evidence of any sort of ritual involved, or even clear grave delineations. Still, the deliberate burial means its bones were well-preserved.

“A human skeleton is like a biography of that person,” says lead investigator Ashleigh Haruda from the Central Natural Science Collections at Martin Luther University Halle-Wittenberg (MLU). “The bones provide a great deal of information about how the person lived and what they experienced.” In the case of the cat, there were enough remains — its entire skull including its lower jaw, along with parts of its upper body, legs and four vertebrae — to understand quite a bit about its life.

Haruda’s team included both archaeologists and DNA specialists. The tabby did not have an easy life, says Haruda, who conservatively estimates the cat was at least one year old at the time of death.

X-ray and 3D imaging of the bones revealed that “the cat suffered several broken bones during its lifetime.” Isotope analysis revealed a high-protein diet, and according to Haruda, “It must have been fed by humans since the animal had lost almost all its teeth towards the end of its life.”

From an historical point of view, the cat’s presence in the Oghuz community suggests a surprisingly early change in the way these people viewed animals. “The Oghuz were people who only kept animals when they were essential to their lives,” says Haruda. “Dogs, for example, can watch over the herd. They had no obvious use for cats back then.”

Certain types of dogs seem to be more discerning than others, however.
Health

Frank Lloyd Wright captured serenity in his masterpiece, Fallingwater, but his egotistical tendencies made life for others anything but serene.
Up Next
Hard Science